Tripoli yearns for normality amid growing humanitarian concerns | World| Breaking news and perspectives from around the globe | DW | 29.08.2011

With the fighting between rebels and the remnants of the Gadhafi regime now focusing on the former leader's hometown, residents in Tripoli are trying to readjust their lives - amid growing humanitarian concerns. 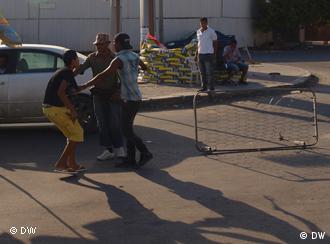 "Tripoli is under revolutionary control. Most militias loyal to Gadhafi have left and we are the police now," Nashid al Mansour, a rebel fighter, told Deutsche Welle just outside the Libyan capital.

The road from the Nafusa mountains, around 150 kilometers (93 miles) south-west of Tripoli was pratically impassable until last week but everything suggest that the insurgents' offensive in full coordination with NATO has dramatically tilted the war in favor of the rebels.

The atmosphere across the Libyan capital's checkpoints was relaxed. Fighters asked journalists to take photos and vehicles were barely checked. Little wonder here as the majority of the cars bound for Tripoli are carrying more supplies for the victorious rebels, either ammunition or more fighters.

Despite the apparent feeling of normality on Tripoli's outskirts, the traffic out of Tripoli bound for Tunisia via the Nafusa mountains was heavier, occasionally causing traffic jams.

"We're leaving for Tunis until the dust finally settles down," Abdullah Saleh, a Tripoli resident, told Deutsche Welle from a checkpoint at Gargaresh district. He was carrying his wife and two kids in a heavily packed 4X4.

"They are Gadhafists, that's all," Deutsche Welle was told by the rebels at the checkpoint.

The flux of local residents out of the capital is mirrored in the gloomy atmosphere on the streets. A few shops have started to set up again and the first queues can already be spotted in the handful of bakeries which have resumed work, but many parts of Tripoli still resemble a ghost town. 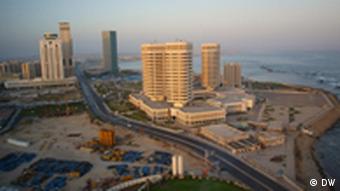 Living in a ghost town: Many parts of Tripoli look deserted

"A lot of people have left for fear of reprisals, or simply because living conditions are deteriorating by the day," one resident told Deutsche Welle at the makeshift bazaar in downtown Tripoli.

Fighting may be over in the Libyan capital but rebel authorities are now being forced to fight on other fronts. The most worrying one is the water supply.

For the last four days, around 70 percent of the Libyan capital - around two million people - has had no water. The first of the three ships commissioned to supply water, oil and gas arrived on Sunday.

"We're working hard to tackle this difficult situation and supplies should be restored soon," the National Transition Council's (NTC) de facto health minister said at a press conference in Tripoli's Corintia hotel. The rebel official added that the growing shortage was due to "either sabotage or a lack of personnel in the main plants."

But some residents see light at the end of the tunnel. As has already happened in Benghazi or in the Nafusa mountains, legions of youngsters have taken to the streets to clean and remove the war debris. 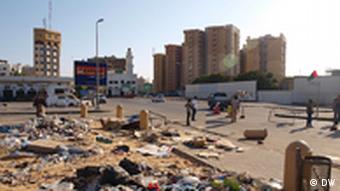 "This is yet another way to fight other than holding a rifle. We need to speed up in order to go back to normal as soon as possible," Hassan, a member of a cleaning crew, told Deutsche Welle.

Gadhafi's portraits, green flags or even official documents also pop up amid the street rubble. The signs of the previous regime are often laid in the middle of the road for the traffic criss-crossing the Libyan capital to drive over them.

"People say the war is over but this just the beginning," Abdulaziz, a local resident, told Deutsche Welle. "Did you know that people are demonstrating in Misrata (north-west of Tripoli) against the new authorities? They're saying that their life now is worse for them than with Gadhafi," he added.

Misrata paid the biggest death toll after being isolated from rebel strongholds further east but the locals fear that relations with the new National Transitional Council administration will be tense. The ancient unrest between the tribes that form the social core of Libyan society may well be Libya's biggest hurdle in the immediate future.

As the rebels inch closer to fugitive Libyan leader Moammar Gadhafi's hometown of Sirte, Algeria's Foreign Ministry confirms Gadhafi's wife and three of his children have arrived on their side of the border. (29.08.2011)