Treuhand took the heat for privatization of East German economy | Germany | News and in-depth reporting from Berlin and beyond | DW | 20.09.2010

Treuhand took the heat for privatization of East German economy

When it came to turning the GDR's planned economy into a market economy, there was no blueprint to follow but just the wish to get it done. The job went to the Treuhand privatization agency. 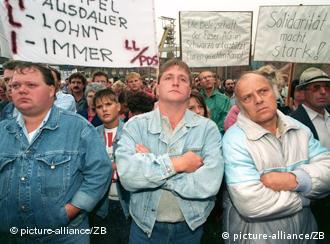 The transition to a market economy led to job losses

The Treuhand trust was created in the summer of 1990 to take control of previously state-owned East German companies waiting in line to be integrated into the new unified nation. Their number totalled 12,000, and collectively they employed four million people. Such are the figures that will forever be associated with the Treuhand agency, but behind them there are human dramas, stories of success and a dramatic attempt to turn a national economy inside out.

West German manager Detlev Carsten Rohwedder was appointed chairman of the agency and made no bones about the route down which he planned to take it. His vision was to privatize as much of the GDR economy as was possible and use the proceeds generated to cover the costs incurred along the way. He once stated that the 'whole thing' was worth 600 billion deutschmarks.

But his estimate was way off the mark and by the time the Treuhand was dissembled four years later, it had run up debts to the tune of 300 billion marks.

Rohwedder, however, did not live to see the project through to the end. He had only been in office for a few months before he was shot. The assassin has remained elusive ever since, but there is wide-spread belief that the murder was the work of the radical left-wing terrorist organization the Red Army Faction (RAF). Birgit Breuel stepped into the breech, adopting both her predecessor's job and approach to it.

It soon became apparent that the strength of the GDR economy had been gravely overestimated. Monetary and social union put the value of the East and West currencies on the same level overnight, although the latter was worth four times as much. Jan Priewe of Berlin's University of Applied Sciences (HTW) believes that move, which was purely political, but which saw wages of 1,000 East marks become wages of 1,000 West marks, was the beginning of the end of the GDR economy. 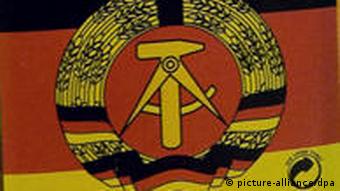 Many East German products ceased to be made

It meant their products were overpriced and unpopular with consumers, which in turn ultimately led to vast-scale bankruptcy and company closures. Within a very few months, the gross national product in the East had fallen by one third.

Despite serious efforts to sell companies, the economic situation in eastern Germany made it impossible to find buyers. The only way the Treuhand agency could off-load the massive state holding companies that dotted the landscape was to sell them at subsidized prices. Eager to get rid of what it was holding, the Treuhand was easy prey for hustlers. Countless small and medium-sized companies fell into the hands of dubious profiteers, and there was talk of a "GDR clearance sale."

The has-been nation was in the grip of a deindustrialization the likes of which had never been seen before. Unemployment quickly raced up to 20 percent and dramatic labor disputes became a regular occurrence as people fought to cling to their existence.

In 1990, 1,000 workers from a potash mine that had supported the community of Bischofferode in the state of Thuringia for many decades lost their jobs in cuts. Three years later, the remaining 700 were given their marching orders. But rather than follow them, the miners occupied the pit, and some of them went on hunger strike.

Although their campaign to save their livelihoods had enough vigor to reach beyond the boundaries of the newly unified country, what had been the most important mine of its kind in the GDR, had already been condemned to closure. The miners were retrained or made redundant. Some were even employed to demolish the place they had worked for so long. With that job done, there was nothing left but anger and resignation.

It was not only in Bischofferode that the Treuhand was the focus of East German resentment, but that, says political scientist Wolfgang Seibel, was always going to be the case. The agency was the sacrificial lamb of economic reunification. 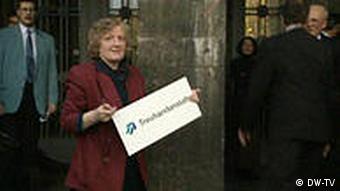 Birgit Breuel rung in the end of the Treuhand

"There was no alternative to the economic process," Seibel said. "Treuhand was charged first and foremost with the task of picking up the political fallout - and taking the heat of people's anger. That was really its job."

Although much of what the Treuhand did is associated with bitter memories, there are also some success stories. Twenty years after reunification, the Jena-based manufacturer Jenaoptik is an international business; on the coast most shipyards are still operating; and car assembly lines have reopened in Thuringia and Saxony.

At the end of 1994, following a government decision, the Treuhand privatization agency ceased to be. In a gesture of great symbolism, Birgit Breuel unscrewed the Treuhand sign from the wall of the building that had housed the agency set up to make the great transition. From then on in, it was down to many little "Treuhand" companies to finish what it had started.

And some of them are still hard at it.

Charges that unification was really an annexation stir up memories