Toxic waters in war-torn Ukraine: How not to phase out coal

Around the world, coal-producing countries are struggling for a "just transition" away from fossil fuels. But for Donbas in war-torn Ukraine, shuttered mines threaten ecological disaster. 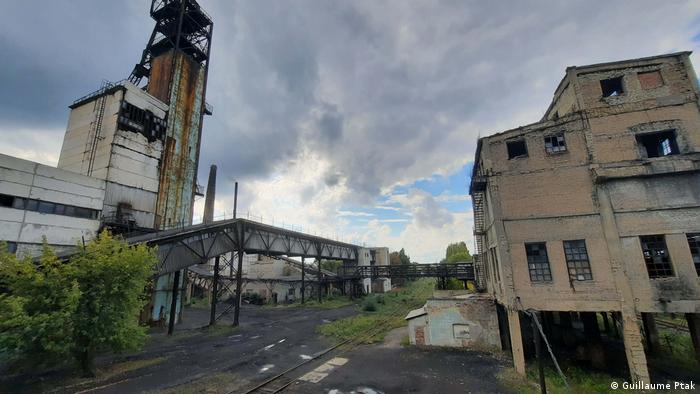 "Before the war started, I used to water my garden with it, but now it's unusable," said 82-year-old pensioner Lyudmila Ivanovna Tarasova, sighing as she gestured toward the Komyshuvakha River, where the flowing water is an unsettling orange.

Tarasova lives in a little wooden house on the outskirts of Zolote, in eastern Ukraine. The Komyshuvakha that runs close by is a tributary of the Severskiy Donets River, itself the main freshwater source for the war-torn region of Donbas. In recent weeks, the easternmost part of Ukraine has found itself once again in the spotlight, with fears of a Russian invasion mounting following an unprecedented buildup of troops at the border. Retiree Tarasova lives by the polluted Komyshuvakha River, and can no longer use it to water her garden

Home to some 6.5 million inhabitants, Donbas has long been Ukraine's biggest industrial hub and a major coal producer. Over 200 years, an estimated 15 billion tons of the fossil fuel has been extracted from the region.

After the fall of the Soviet Union, many of Donbas' mines became unprofitable and shuttered. Since conflict broke out between the Ukrainian state and Russian-backed separatists nearly seven years ago, many more have fallen into disuse and disrepair.

What might initially sound like a win for the environment has become a testament to the ecological disaster that can ensue when mine closures are poorly managed.

Hundreds of thousands at risk from contaminated waters

When a mine ceases to operate, water must be constantly pumped out of the underground shafts and chambers to prevent them from flooding. Groundwater that does enter can become contaminated with heavy metals, which may then permeate underground aquifers and the surrounding soils, rendering them unusable for farming.

A 2019 report by Ukraine's National Institute for Strategic Studies called chemical contamination from flooded mines an "urgent threat" to at least 300,000 people in separatist-held-areas, while every fourth resident near the contact line — a stretch of land that separates government and non-government-controlled territories — already lacks a reliable source of drinking water. 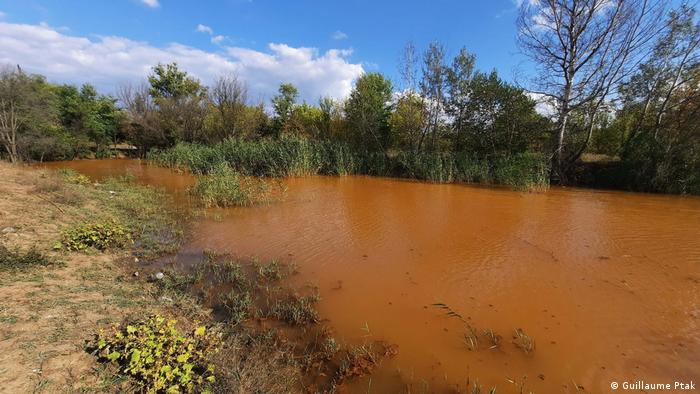 The Komyshuvakha River has been colored orange by highly mineralized mine water, and is no longer drinkable

"The incidence of diseases such as acute gastrointestinal infections, especially in children under 4 years old, is already dozens of times higher than the average in Ukraine," said hydrogeologist Evgeny Yakovlev, a senior research fellow at the National Academy of Sciences of Ukraine, of the situation in Donbas.

In 2017, Yakovlev led the last comprehensive survey of coal mine flooding and its impact on water quality in Donbas. Its findings were dire. "Ninety percent of the water sampled outside of the centralized supply system is not drinkable," he told DW.

Most of the Donbas region's water originates from the 300-kilometer (186-mile) Siverskyi Donets–Donbas canal, run and maintained by Ukrainian municipal public company Voda Donbasu. However, the waterway is located within the front-line zone and therefore regularly damaged by fighting. This has forced people to rely on contaminated well waters.

Yakovlev's study was the last one to be conducted on both side of the front line and, since 2017, no data has been made available on environmental degradation in the territories outside of Ukrainian control.

However, over the past few years, the Ukrainian government has repeatedly accused the authorities of the self-proclaimed People's Republics of Donetsk and Luhansk of closing mines without the necessary environmental precautions. 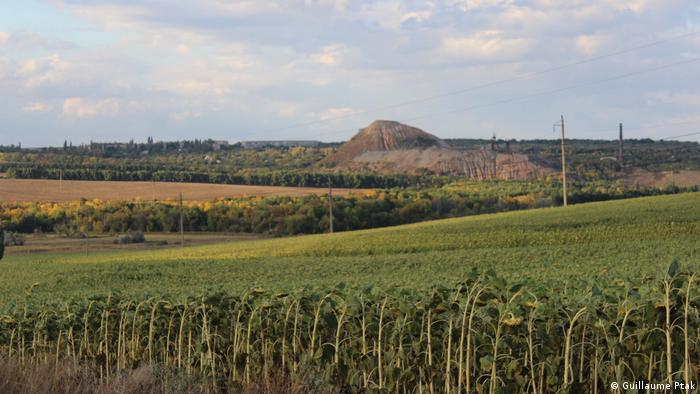 Of particular concern is the Yunkom coal mining complex in Yenakiieve, where in 1979 Soviet authorities detonated a 0.3 kiloton nuclear bomb underground in a bid to free methane gas.

In 2018, separatist authorities decided to end the costly maintenance of the mine. Ukrainian officials have said that move has led to water pouring into the complex's lower levels, with groundwater already contaminated and potentially carrying active radionuclides, formed by the bomb, into the Kalmius and Seversky Donets rivers and even beyond to the Black Sea.

The Energy Ministry of the self-proclaimed Donetsk People's Republic (DPR), meanwhile, has denied there is any problem. "Environmental degradation in the DPR, unlike the difficult environmental situation in modern Ukraine, is not occurring," it told DW.

Dumping polluted water into the Komyshuvakha

Yet, some believe that it's easier for the Ukrainian authorities to blame the separatists than to address the problems that also exist on their side of the front line. Representatives from the government seem at times more concerned with fiery rhetoric than cross-border cooperation to solve those issues, according to Benoit Gerfault, coordinator for French humanitarian NGO ACTED.

And with networks of mines interconnected, damage and neglect on one side of the conflict line can quickly become a problem for the whole country. 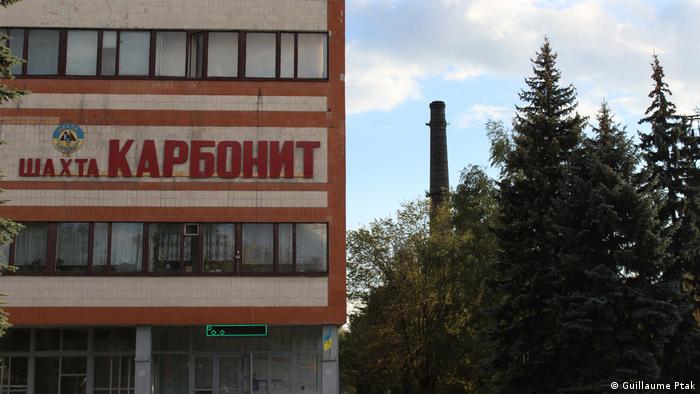 The Karbonit coal mine, located in the city of Zolote, is still operational

In May 2018, water from the flooded Rodina and Holubovska coal mines, located behind separatist lines, rushed into the Zolote mine in government-held territory at a speed of 2,000 cubic meters per hour.

Unable to cope with the deluge, treatment facilities at Zolote have been pumping out contaminated mine water around-the-clock ever since — and dumping it, untreated, into the Komyshuvakha River, according to local media reports.

"Even for technical purposes, for livestock, there's no more water," said Oleksii Babchenko, head of the civil-military administration of Zolote. "No way to water the crops, either."

As the river's contamination has grown increasingly visible, locals are seeking water elsewhere.

"For my garden, I now use collected rainwater," said pensioner Tarasova. For cooking she boils water from a local stream, but for drinking she relies on bottled water from the store in Zolote — a considerable walk away for a woman of 82.

The flooding of Donbas' coal mines has also led to the displacement and buildup of methane gas, increasing the risk of explosions and earthquakes. When groundwater levels rise, the submerged soils lose density and start shifting, causing seismic activity.

"When you go down in the mines here in Zolote, it smells of gas, as if someone had left the stove on in a kitchen," said Babchenko.

And then there is subsidence.

When shafts in heavily mined regions collapse due to flooding, the ground surface above them begins to shift and sink. According to some estimates a total area of 12,000 hectares (around 29,000 acres, or 46 square miles) in Donbas is threatened with subsidence.

The OSCE has warned that this could lead to landslides and sinkholes, as well as the failure of engineering and communication infrastructure — gas lines, sewage and water supply systems. Hydrogeologist Yakovlev said entire cities could become uninhabitable.

"As the ground is sinking, cracks have started appearing on the buildings," Babchenko said of Zolote. "One of the local schools is in need of constant repairs."

Just transition in a war zone

At the UN climate conference in Glasgow last month, Ukraine committed to giving up coal by 2035. But officials say winding up the two-century industry in Donbas and ensuring a "just transition" away from fossil fuels that would secure workers' rights and livelihoods is a challenge unlike that faced by other coal-producing countries. 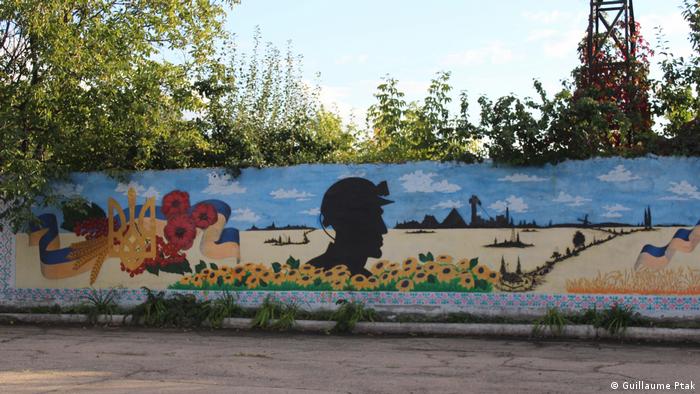 This mural honors the miners of Zolote, where a 'just transition' away from fossil fuels remains difficult

Despite regular shelling, Zolote's remaining coal mines still employ around 3,500 people, according to Babchenko. The official said shuttering them without massive investment would be a socioeconomic disaster.

"We need to invest both in an environmentally safe way to close down the mines, and in social and employment programs for the workers," he said.

"Many people talk to us about the experience of France, Germany and England," Babchenko added. "But let's not forget that in none of these regions was there an active military conflict."

In August, thousands of activists will take part in anti-coal demonstrations in western Germany, as mines and plants continue to operate and expand. DW looks at the impact of coal mining on people and nature there.