Basic food crops for millions of people worldwide are endangered because of surging ground-level ozone concentration. Indian farms are among those most at risk. Scientists are now racing to make plants more resistant. 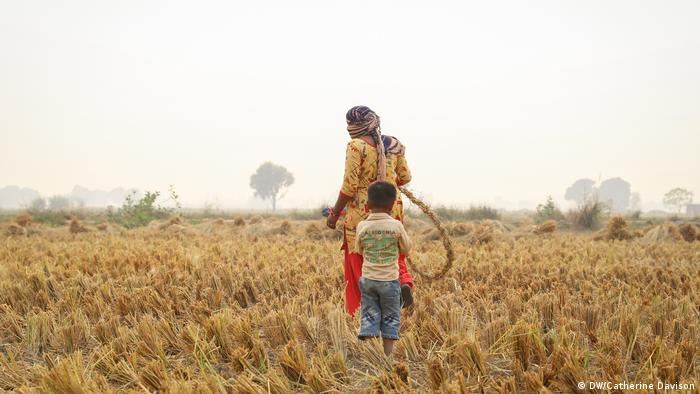 The alarming discovery of an increasing hole in the planet's ozone layer in 1985 led to a global ban on the production of CFCs, halons, and other ozone-depleting chemicals. As a result, the protective cocoon of gas that shields the earth from harmful solar radiation is now on the mend. Last year, NASA announced that the hole in the ozone layer was much smaller than when first discovered.

Read more: Healing the ozone layer: A ray of hope for planet Earth?

But while the ozone present in the upper atmosphere works as a natural sunscreen blocking harmful ultraviolet rays, high ozone concentration on the ground is toxic for people's health, and damages vegetation and ecosystems.

Ozone is a key component of smog. It is created by a chemical reaction between nitrogen oxide and pollutants emitted by cars and power plants in the presence of ultraviolet sunlight.

Recent findings by the Royal Society, the UK's sciences academy, suggest ground-level ozone has increased by about two parts per billion (ppb) each decade since the 1980s. What's more, ozone levels have breached safety thresholds in many regions around the world, and have been linked to severe vegetation damage globally.

"These effects of ozone are also comparable to other stresses such as pests and diseases in plants, heat, and aridity," explained Ane Vollsnes, a researcher at the University of Oslo, citing a study that shows ozone has the most damaging impact on plants compared to other factors. 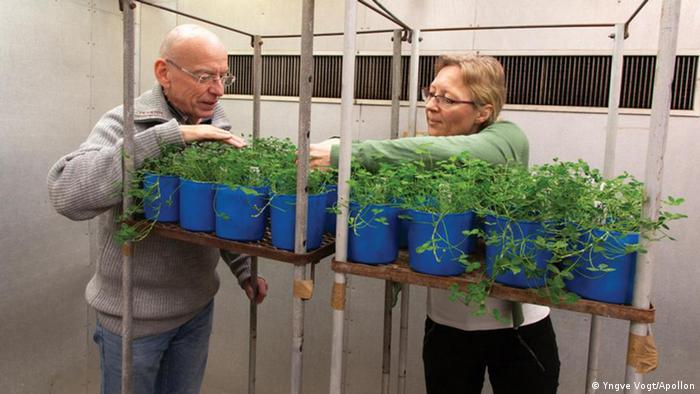 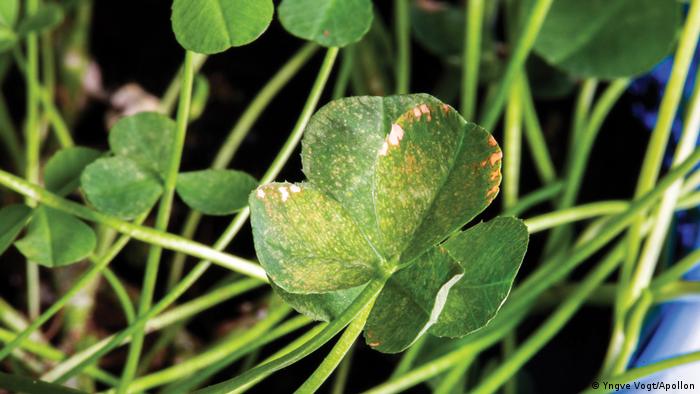 Around the world, scientists are trying to understand the correlation between ground-level ozone and damage to vegetation.

The ozone concentration rises when it's sunny, which has led to big problems in countries like Norway and arctic regions that experience many hours of sunlight in summer.

Ane Vollsnes and Frode Strodal at the University of Oslo have been tracing how ground-level ozone pollution affects plants, depending on how much sun they get. For their study, they exposed clover plants to ozone for three six-hour periods in their lab.

"In our experiments, the clovers were exposed to 70 ppb of ozone. In Europe, 70 ppb often occurs during the daytime in some regions, and it's not considered a very high level," Vollsnes told DW.

They found that after a few hours, black spots started to appear on the clovers' leaves, indicating dead tissue. Even this brief exposure was enough to damage the plants by blocking their tiny pores called stomata, which help them breathe.

In contrast to oxygen's two atoms (O2), which are essential for the existence of life, the three atoms of oxygen (O3) that make up ozone can suffocate plants and animals when inhaled. In humans, it can damage lung tissue.

Ozone tends to block the small holes called alveoli in the lungs, aggravating respiratory problems such as shortness of breath, asthma attacks, and coughing. Long-term exposure to ozone is linked to permanent health issues, such as abnormal lung development in children.

Some of the highest levels of surface ozone in the world have been found in parts of the western US, Norway, northwestern India, China, and Pakistan. That also means that crops in these regions are particularly at risk. 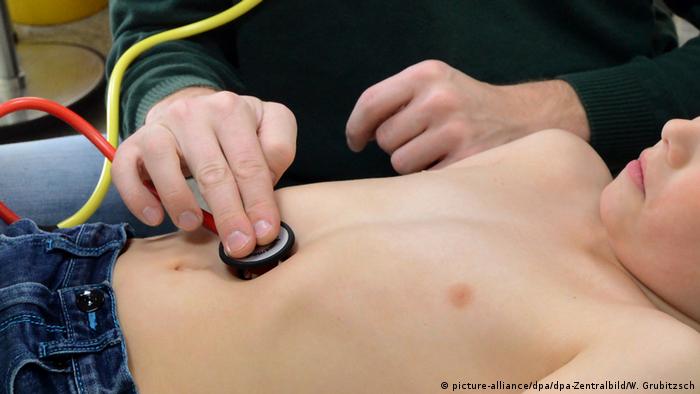 Asthma patients and children are particularly at risk from ozone pollution

Ozone in India killing crops that could feed 94 million

India faces a distinct challenge to curb ozone-causing pollution as hot weather speeds up the chemical reactions that create ozone near the surface. The country is estimated to have suffered massive vegetation loss over the last two decades, according to a study by the Indian Institute of Technology in Kanpur.

"Our estimates show the highest annual loss of wheat of about 9 million tons in northern India, one of the most polluted regions in India, and about 2.6 million tons of rice in the eastern region," Shyam Lal Gupta, one of the lead authors, told DW.

Similar recent studies by major institutes like the University of Oslo, the Indian Institute of Meteorology and UK Centre of Ecology and Hydrology indicate that crops in India face the impacts of ozone every winter whenever smog levels increase.

It has led to a loss of two-thirds of the annual harvest in the states of Punjab, Uttar Pradesh, Bihar and West Bengal. However, Gupta adds that more research needs to be done to show "long-term trends in surface ozone over the Indian region." 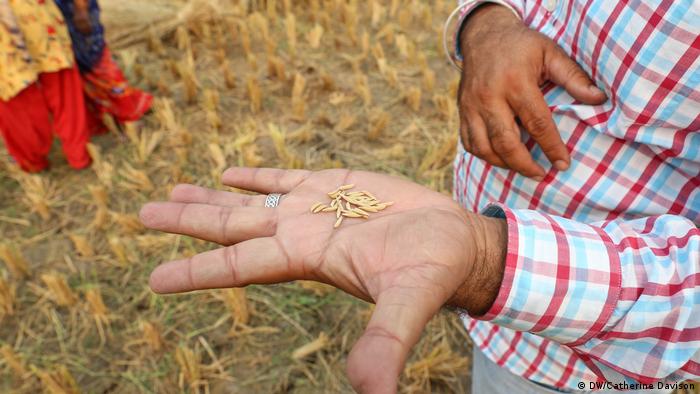 Basmati rice is one of the main export items of India

According to Vollsnes, India and China will likely bear the brunt of ozone's damaging impact on food production.

"This is where population growth is the greatest, and the standard of living is increasing the most," Vollsnes told DW. "This is happening at the same time as the need for food is increasing."

The number of vehicles in India has nearly tripled in the past decade, with 130 million cars in 2013 compared to 50 million in 2003, according to the International Council on Clean Transportation.

Nitrogen oxides and volatile organic compounds (VOCs) emitted from such vehicles create the ideal conditions for ozone to accumulate on the ground as temperatures rise due to global warming. 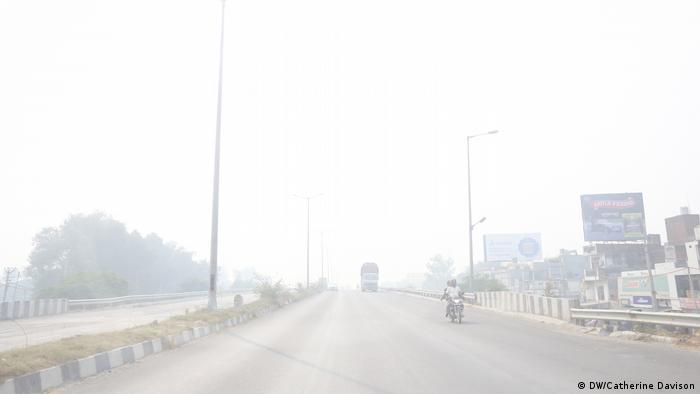 A busy road in the middle of the day is caught in a haze in the smoggy Indian capital, Delhi

That's why researchers like Shyam Lal Gupta are calling for new solutions.

"We have suggested that if the winter cropping season is shifted a bit earlier, when ozone levels are lower, it will have a positive effect on saving the crops," he said, but adds it might be difficult when the monsoon rains begin, as they can spoil crops that need dry conditions to grow — like wheat.

"The other suggestion is to produce a new variety of wheat and rice or of other crops, which will have lower damaging effects due to ozone," Gupta said.

In a 2019 paper published in Nature Communications, researchers at the University of California reported they had successfully prepared plants capable of surviving in different temperatures. For instance, arabidopsis, a model plant, can grow at different times of the year as the season changes.

This could potentially minimize ozone impacts on crop yields by helping plants grow all year round and avoid smog. It would be even more effective to reduce the levels of toxic surface ozone in the first place by mitigating pollution, but Gupta said there's a lack of awareness surrounding the problem.

"We do not find any mitigation policy being implemented in India just for ozone," he said. "However, efforts to control air pollution are being made by different government agencies. These efforts will also have effects on the levels of surface ozone."

India is seeing reduced smog levels for the first time in many years thanks to a strict coronavirus lockdown.

To date, climate negotiations have focused mainly on bringing down carbon emissions. But without further efforts to regulate other poisonous emissions, rising temperatures and pollutants like nitrogen oxides will continue to form ground-level ozone.

2019 Ozone Hole is the Smallest on Record Since Its Discovery

Loss of crop yields in India due to surface ozone: an estimation based on a network of observations

The double punch: ozone and climate stresses on vegetation

Reductions in India's crop yield due to ozone

Farmers like Harjinder Singh in the Indian state of Punjab are increasingly adopting mobile solar power plants to pump water and irrigate crops. He says the flexible setup has made life easier.