A powerful US senator has said he would block arms sales to Gulf states until there is a resolution to the Qatar crisis. Senator Bob Corker's threat adds pressure on Saudi Arabia and Gulf states to compromise with Qatar. 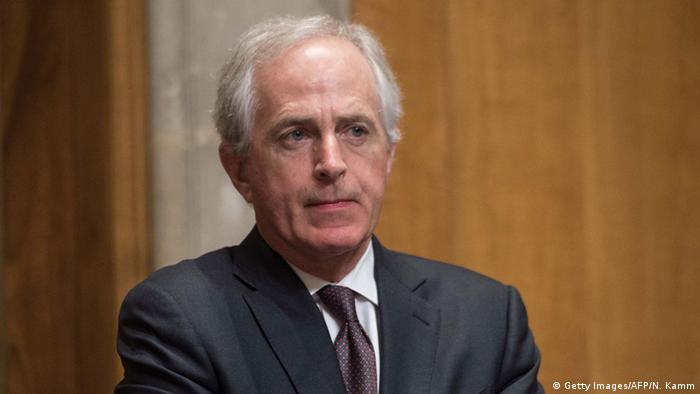 The chairman of the US Senate Foreign Relations Committee said Monday he would block US arms sales to Saudi Arabia and other members of the Gulf Cooperation Council (GCC) until a diplomatic spat with Qatar is resolved.

"All countries in the region need to do more to combat terrorism, but recent disputes among the GCC countries only serve to hurt efforts to fight ISIS (the so-called "Islamic State") and counter Iran," Republican Senator Bob Corker wrote in a letter to Secretary of State Rex Tillerson.

The influential senator said that his committee would block lethal military weapons sales to GCC states - Saudi Arabia, Kuwait, United Arab Emirates, Qatar, Bahrain and Oman - until there was "a better understanding of the path to resolve the current dispute and reunify the GCC." 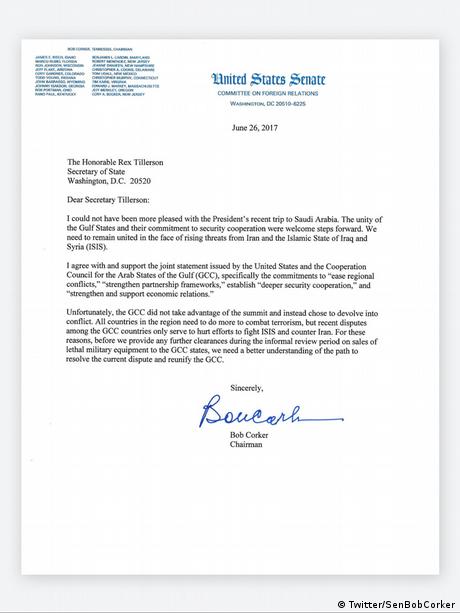 Letter from Republican US Senator Bob Corker to Secretary of State Rex Tillerson.

The senior senator's threat adds pressure on GCC members to settle the crisis, triggered on June 6 when Saudi Arabia, Egypt, Bahrain and the United Arab Emirates imposed a blockade on Qatar and cut diplomatic ties.

But is also sends a message to the Trump administration, which has sent mixed messages to Qatar and other GCC states during the crisis.

"Corker's letter was a shot across the bows of the White House and a clear signal of frustration at the way the President and his team have handled the Gulf crisis," Kristian Ulrichson, a Gulf expert at Rice University's Baker Institute, told DW. "The lack of a consistent approach between the White House and the Departments of State and Defense has sent mixed messages that could undermine confidence in the US among its most important regional security partners."

US President Donald Trump's first foreign trip kicks off in Saudi Arabia - far from the troubles plaguing him at home. In Riyadh, he will speak against radical Islam and seek to close an arms deal. (19.05.2017)

US seals F-15 warplane deal with Qatar amid naval visit

The US and Qatari defense ministers have met in Washington, signing off on a fighter jet deal worth billions. This follows four regional rivals severing ties with US ally Qatar, a move Donald Trump initially lauded. (15.06.2017)

Al Jazeera: A popular broadcaster on a mission

Al Jazeera is Qatar's patron and instrument of power. Now the news broadcaster finds itself in the middle of the conflict brewing with Gulf neighbors; for rulers in Riyadh, it has long been a thorn in the side. (26.06.2017)

Turkish President Erdogan dismissed demands from Arab countries that Qatar shutter a Turkish-run base. He said the demands intruded on Qatar's sovereignty. The US called on all parties to tone down the rhetoric. (25.06.2017)

Under US law, the State Department must notify Congress 30 days before any major arms sale. Congress can then block the arms sale, or if it does nothing the sale goes through.

Corker's office said in a statement that major arms sales are also subject to "preliminary approval" by the chairman and vice-chair of the Senate Foreign Relations Committee and House Foreign Affairs Committee before the 30-day congressional review process.

Saudi Arabia, Egypt, Bahrain and the United Arab Emirates accuse Qatar of supporting terrorism, having close relations with Iran and backing the Muslim Brotherhood, viewed as a political rival of the conservative Gulf monarchies and military rulers in Egypt.

They have issued 13 demands to Qatar, including shuttering al-Jazeera, reducing relations with Iran and cutting ties with political Islamist groups.

Qatar has denied the allegations and described fellow GCC member demands as an infringement on its sovereignty and foreign policy.

Qatar base for US Central Command

Tillerson said Sunday that a number of the demands on Qatar would be "very difficult to meet," and urged the US allies to resolve their dispute.

Qatar hosts the forward headquarters of US Central Command, responsible for military operations in the Middle East.

US President Donald Trump has announced billions of dollars in arms sales to GCC members, and it was not immediately clear what deals could be impacted.

US sales to Saudi Arabia, Qatar

In Saudi Arabia last month, Trump announced a $110-billion (97.8 billion-euro) arms deal with the kingdom for it to fight terrorism, continue its war in Yemen and counter Iran.  A $500 million sale of precision-guided munitions that was part of that package was already cleared through Congress last month.

After Trump initially took the side of Saudi Arabia, the State Department and Pentagon sought to balance the president's rhetoric and mediate the dispute between its allies. Part of that effort included initial US approval this month for a $12-billion sale of F-15 war planes to Qatar in a bid to reassure its ally of its commitment.

Corker is considered a close ally of Trump and his voice is likely to be listened to by the White House.