A top US health official has told a conference on Ebola that swift action must be taken to stop the disease from becoming the next AIDS epidemic. UN chief Ban Ki-moon called for a 20-fold surge in aid to combat Ebola. 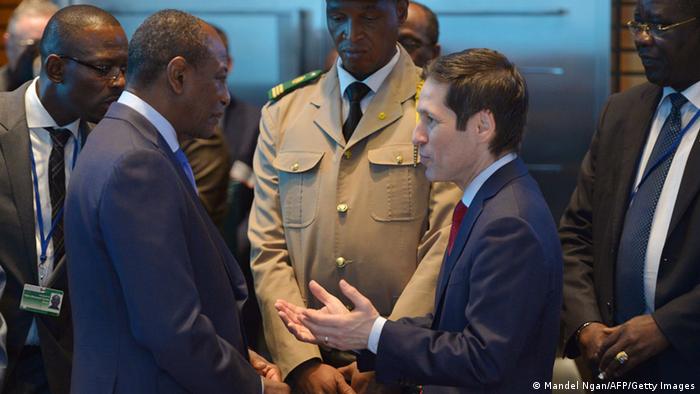 The current Ebola outbreak could become the next AIDS epidemic if the world does not respond quickly, a top United States health official said on Thursday.

Thomas Frieden (2nd R. in photo above), the director of the US Centers for Disease Control and Prevention (CDC), told the heads of the United Nations, World Bank and International Monetary Fund gathered in Washington DC that there was a "long fight" ahead.

"We have to work now so that it is not the world's next AIDS," Frieden told the high-level donor conference, convened to boost international aid to combat the deadly disease.

The CDC has predicted that the number of Ebola cases could rise to 1.4 million by January if effective measures are not taken to stem the disease, which has killed nearly 4,000 people in the worst-affected countries, Sierra Leone, Guinea and Liberia.

International concern has grown after the first person diagnosed with Ebola in the United States died on Wednesday and the condition of a Spanish nurse infected with the virus deteriorated on Thursday.

Three people with Ebola have been treated in Germany, including, most recently, a male UN employee from Liberia who was flown into the eastern German city of Leipzig for treatment early on Thursday.

United Nations Secretary-General Ban Ki-moon called for the world to step up its efforts to contain the disease by 20 times.

"For those who have yet to pledge, I say please do so soon," Ban said. "This is an unforgiving disease."

So far, donor countries have come up with less than a third of the $988 million (778.24 million euros) that the UN has appealed for in international assistance.

The World Bank has estimated that the Ebola outbreak could cost West Africa up to $32 billion (25.21 billion euros) if it continues its rampage in the region through next year.

'Our people are dying'

The presidents of Guinea, Liberia and Sierra Leone also made emotional appeals at the conference, which included 40 officials from donor governments, development groups and global institutions.

"Without you we can't succeed, without your quick response a tragedy unforeseen in modern times will threaten the well-being and compromise the security of people everywhere," he said, adding that the international response had so far been slower than the disease's rate of transmission.

The continuing outbreak has forced officials in Liberia - the worst-hit nation - to postpone nationwide elections, citing the danger of infection at polling stations.

The United States and Canada have both introduced stricter screening of passengers arriving from West Africa, and the European Commission was due to meet on October 17 to consider new ways of monitoring travelers from affected countries.

Travel bans have been part of the pandemic response — especially with the arrival of new variants like omicron. The WHO has criticized the practice, but that hasn't stopped countries from going ahead with it.