Top drug cartel leaders killed in Mexico near US border

Two leaders of rival drug cartels have been killed in clashes with federal forces, officials said. Their deaths have caused unrest in a Mexican border town, with cartel supporters blocking roads and torching businesses. 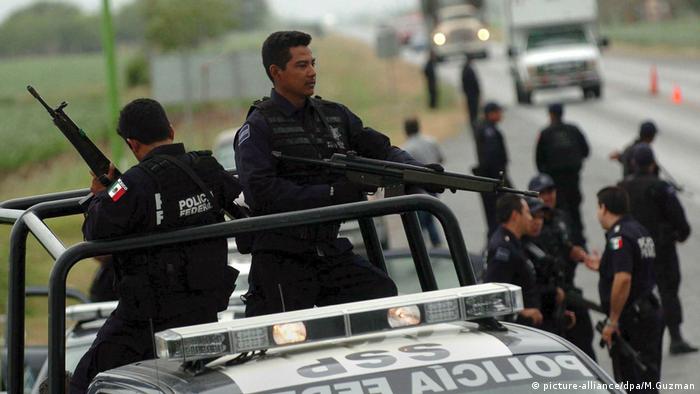 Mexican authorities on Saturday announced that two top drug traffickers had been killed in a shootout with federal forces in the northern border state of Tamaulipas.

"Two key targets were shot down [in separate instances] last night in Reynosa and the state capital. The government of Tamaulipas and federal forces will not relent against crime," the local government said in a tweet.

The deaths of the drug traffickers caused unrest in the border town of Reynosa. Supporters of the suspects' drug cartels blocked off several roads in the Mexican town, engaging in firefights with police and setting fire to local businesses, authorities said.

Julian Loisa Salinas, who went by the name "Comandante Toro" as leader of the Gulf cartel, was shot dead in Reynosa, while rival leader Francisco "Pancho" Carreon of the Zetas cartel was killed in the Tamaulipas state capital of Ciudad Victoria, according to authorities.

Mexico's bloody drug war has spanned a decade, with estimates placing the death toll of cartel-related violence at approximately 120,000 from 2006 to 2012, not including disappearances.

"Weak judicial and police institutions, as well as proximity to the world's largest consumer economy, have made Mexico the hub of one of the world's most sophisticated drug networks," said the US-based think-tank Council on Foreign Relations in a report.

Despite deteriorating diplomatic relations, US President Donald trump has vowed to assist Mexican President Enrique Pena Nieto's administration in tackling drug cartels and curbing the flow of narcotics into the US.