The Mexican state of Veracruz is running out of room for hundreds of newly unearthed bodies. The state prosecutor has accused authorities of turning a blind eye to the gruesome mass burial grounds. 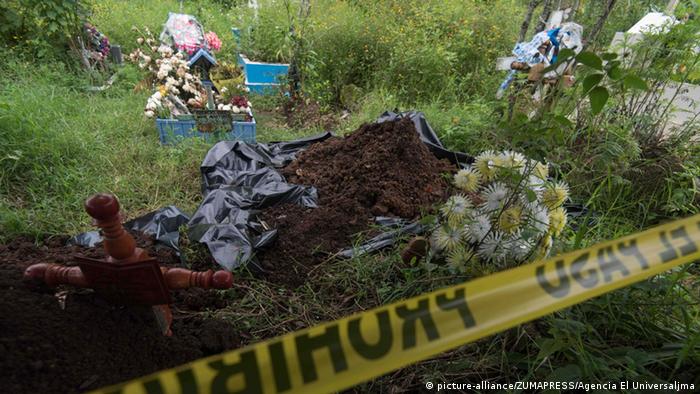 Veracruz state prosecutor Jorge Winckler Ortiz said on Thursday that the scale of mass graves in the eastern region was so great a bulldozer or mechanical excavator must have been used to create them.

Officials have ceased to dig for bodies in unidentified clandestine burial grounds, Winckler added, simply because there is no further room in forensic laboratories for more human remains.

"There are a lot of towns where clandestine graves have been found," Veracruz's top prosecutor said. "There are pits where we are not working because we don't have space to put the bodies that we might find."

Winckler also added that DNA testing of the bodies would begin in May once authorities receive the required funds.

Winckler made his remarks at a mass burial ground in Colinas de Santa Fe, a port city some 385 kilometers east of Mexico City where authorities recently uncovered at least 242 bodies in 124 graves. Such mass burial sites often contain bodies piled directly one atop the other - a typical sign pointing to drug gang killings.

Authorities found out about the gruesome field in Colinas when mothers searching for their missing children uncovered the first of the hidden graves in August 2016. The relatives went searching for their offspring's remains after the then-in-power officials failed to take action.

Winckler likened the initial discovery to a macabre treasure hunt with victims' family members and advocates using a hand-drawn map given to them anonymously to locate the hundreds of buried graves, each marked with a small "x."  The searchers sank rods into the earth in order to release any telltale odors of decomposition.

The map also contained a statement attributing the murders to the Jalisco New Generation, a cartel whose 2011 entry into Veracruz unleashed a deadly rival with the Zetas gang.

According to Winckler, the industrial scale of the clandestine graves is so great that authorities in previous state administration must have known about the bloody proceedings.

"It is impossible that nobody realized what was going on here, how vehicles were coming and going," the prosecutor said. "If that is not complicity on the part of authorities, I don't know what it is."

Winckler's interim predecessor, Flavio Rios, a right-hand man of Winckler, was detained this past Sunday for aiding Duarte in his escape via helicopter. Rios is also accused of influence peddling and abuse of office.

Local police have also been detained and charged with abetting kidnapping and delivery of people into the hands of drug cartels.

The timing of Guzman's extradition surprised many, including his lawyer who said four appeals remained outstanding. One source said Mexico extradited him while Obama was president, in order to send a message to Trump. (21.01.2017)

Soldiers and police in the southern Mexican state of Guerrero are carrying out operations after hidden graves with dozens of bodies were found. Rival criminal gangs are being sought. (26.11.2016)

Elizabeth Dickinson from International Crisis Group looks at developments in global drug demand and the spread of Mexican cartels in Colombia.