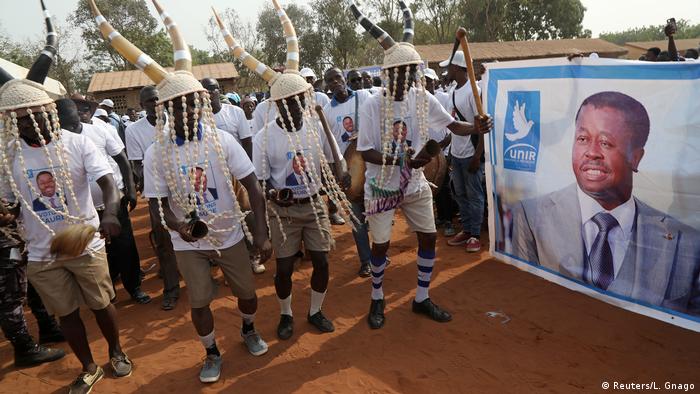 Provisional results from the national electoral commission (Ceni) showed the incumbent had received 72% of votes.

Going into the race, Gnassingbé, who has ruled Togo as president since 2005, was widely expected to win, extending over half a century of dynastic rule by his family.

Conflicting claims and accusations of fraud

Gnassingbé and challenger Agbeyome Kodjo, who was shown with 18% of the vote, had both previously claimed victory.

"Victory is assured but it is up to the Ceni to independently proclaim the results," Minister of Public Function and Gnassingbé supporter Gilbert Bawara had said earlier on Sunday, before official results were in. "We are optimistic and anticipate a clear victory in the first round."

Kodjo on Saturday had also claimed a "true landslide victory" and made accusations of election fraud.

"Considering the revelations of fraud which marked this ballot, it is impossible for the outgoing candidate to be elected in the first round," he told journalists on Saturday, when 60% of votes had been counted.

"I have the conviction that in the coming week, I will lead this country," he had said.

The incumbent has ruled as president of Togo since 2005, when he took over from his father Gnassingbé Eyadema. Challenger Kodjo had served as head of government under Eyadema.

While the election went off peacefully, armed troops were later sent to surround Kodjo's house as well as the estate of the former archbishop of the capital of Lomé, Philippe Kpodzro. Kpodzro, an influential clergyman, had supported Kodjo's campaign.

The government said the temporary military presence was for their "own safety."

Throughout his campaign, 53-year-old Gnassingbé had promised to fight poverty in the country through comprehensive reform programs.

According to the World Health Organization, over half of the population of nearly 8 million people subsist on less than $1.90 (€1.75) a day.

Protests demanding the end to the Gnassingbé family's reign broke out in 2017 and 2018.

Last year, the president instituted constitutional reforms that would allow him to rule until 2030.