Deaths were reported in Togo after security forces moved against protesters across the West African state. Opposition leaders accused "regime soldiers" of opening fire and urged their supporters to continue street demos. 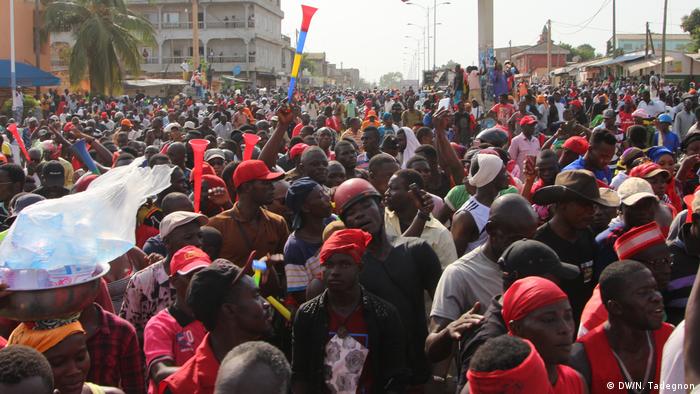 Protesters have been marching in Togo for many months

At least two people were killed in weekend clashes between security forces and protesters in Togo, with police firing tear gas and fighting running battles in the capital, Lome, and other cities across the country.

A dead protester found in Lome had "an open wound in his left eye indicating a bullet entry," the government said in a statement read on national television. The authorities said the victim was about 17 years old, but other reports suggested he was much younger. The iciLome news outlet said that the youth was a 12-year-old apprentice mechanic and that he was killed by the police.

In turn, the government said that unidentified gunmen in a black SUV were firing in the area, adding that a search for the vehicle was underway. Another man was found with no bullet wounds, and both the government and the opposition coalition said there were unconfirmed reports of a third fatality.

The protests escalated after the government called for parliamentary elections on December 20. The opposition opposes the polls, demanding a reform of the national electoral commission and a two-term limit for presidents. Currently, the West African country is ruled by President Faure Gnassingbe, who has been in power since 2005. He had succeeded his father Gnassingbe Eyadema, who previously ruled the country for 38 years.

Both Christians and Muslim religious communities urged the government to delay the vote this week over concerns about the organization.

A coalition made up of 14 opposition parties said it would set 10 protests ahead of the planned election date. Gnassingbe's government, in turn, banned the rallies because of a "very high risk of serious public disorder."

Opposition official Brigitte Adjamagbo-Johnson warned that government critics would "go all the way."

"It was to avoid all this that we asked for the electoral process to be suspended," she said in remarks carried by Togo Breaking News. "The perpetrators of these killings will pay for their actions when the time comes."

The leader of the alliance, Jean-Pierre Fabre, said the government had put down protests with its "customary brutality," according to the French news agency AFP.

At the same time, Fabre praised the protesters' "courage, engagement and determination" and called for new rallies in the run-up to the election.