Tired of being trashed, Philippines ready to dump garbage in Canada

Philippine President Duterte has given Canada two options for garbage sent to the Philippines years ago: Take it back or watch it wash up on Canadian shores. The countries have been talking trash for over five years. 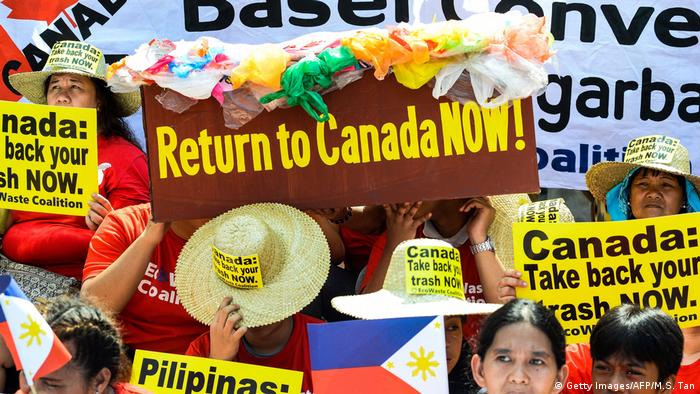 The Philippine government on Wednesday said it would hire a private shipping company to transport and dump dozens of containers of trash into Canada's territorial waters if the country does not take back the trash it illegally sent to the Philippines years ago.

Philippine President Rodrigo Duterte's spokesman, Salvador Panelo, said the government would pay for the costs of shipping the waste after it accused Canada of dragging its feet on an issue that has strained ties between the two countries.

"Obviously, Canada is not taking this issue nor our country seriously. The Filipino people are gravely insulted about Canada treating this country as a dump site," Panelo told a media briefing.

"If Canada will not accept their trash, we will leave the same within its territorial waters or 12 nautical miles out to sea from the baseline of any of their country's shores," he said.

Between 2013 and 2014, more than 100 containers of waste from Canada were shipped to the Philippines and misdeclared as plastics to be recycled. Most of the shipping containers are currently in two ports in Manila and northern Subic Freeport.

Canada says the waste — consisting of trash, plastic bottles, paper and used adult diapers — was shipped as part of a private commercial transaction not supported by the government.

Canadian Prime Minister Justin Trudeau said last week that Canada has been working hard with Philippine officials. In 2017, he said laws preventing the return of the garbage had been addressed.

Canada has offered to take the garbage back and the two countries have been in discussions to arrange the transfer after a 2016 court ruling that found the garbage can be returned.

However, Canada failed to meet a May 15 deadline set by the Philippines, prompting Manila to escalate the issue by recalling its ambassador and consuls.

Last month, the tough-talking Duterte said he would ship the garbage back to Canada even if it triggers a war.

Later Wednesday, Canadian Environment Minister Catherine McKenna said the government had awarded a contract to a shipping company and that the waste would be removed by the end of June, to be disposed of in Canada.

After 12 days of negotiations under the auspices of the United Nations, countries have agreed to treat plastic as hazardous waste. Germany is considering a ban that would go even further. (11.05.2019)

Philippine youth, who make up more than half of their country's population, are generally anti-establishment. Their failure to make an impact on the mid-term polls raises many questions about the future of the country. (21.05.2019)

Philippines: What happens to the drug war under Ferdinand Marcos Jr.? 19.07.2022

Human rights groups and grieving families who have lost their loved ones in the bloody campaign against drugs fear that the same violence will continue and justice will elude them under Ferdinand Marcos Jr.'s presidency.