A Berlin art group planned to fly 100 refugees in from Turkey to protest entry restrictions for asylum-seekers. They also wanted to feed refugees to tigers. The flight was canceled - and the tigers didn't eat anyone. 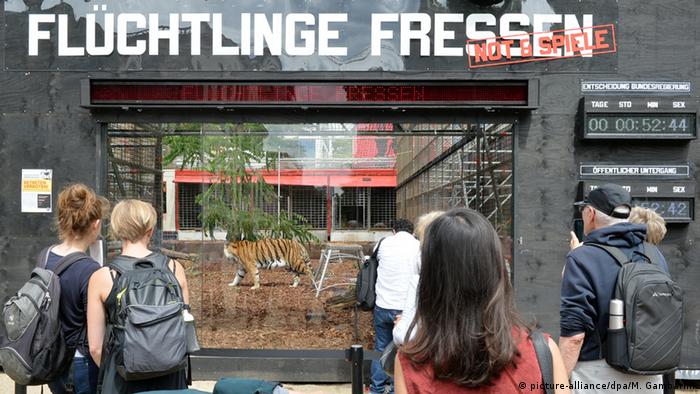 The Center for Political Beauty, a Berlin art collective known for its provocative actions blending theater and political activism, had threatened to stage the devouring of refugees by tigers in Berlin.

They had announced this would take place if the government were to forbid the entry of 100 Syrian asylum-seekers. The collective had planned to illegally fly them in to Berlin from Izmir, Turkey, on Tuesday (28.06.2016), on a specially chartered plane.

After the flight was canceled by the airline AirBerlin on Tuesday morning, the tiger feeding was scheduled for that same evening at the Gorki Theater in Berlin.

The art collective had claimed to have already found at least one refugee ready to be devoured, when they launched their performance 12 days earlier. They tried to recruit more volunteers through the campaign's website. 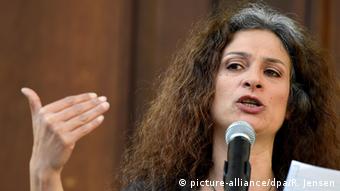 No man-eating in the end

The refugee who was allegedly ready to sacrifice herself was the Syrian actress May Skaf. Instead of jumping in the cage, she delivered a dramatic speech: "Of what use would be my cries amidst the unheard calls for help at night at sea?" she said in tears.

Through this unusual campaign, the Center for Political Beauty said it wanted to draw attention to uniting families by finding safe ways to bring refugees into Germany, instead of letting them take the perilous journey across the Mediterranean.

The collective Center for Political Beauty is known for staging actions that grab the attention of the media.

In June 2015, they organized a reburial in Berlinof the exhumed body of a Syrian woman who drowned while crossing the Mediterranean. The campaign was called "The Dead are Coming."

Earlier this month, the Center for Political Beauty was awarded a Bobs, DW's prize for online activism, in the Arts and Culture category.

Whether amidst the rubble of Damascus or in Berlin's clubs, artists are giving wounded children a piece of hope and even shaking up political regimes. Change, it seems, can begin with a paint brush or a Middle C. (15.06.2016)