The Berlin-based collective Center for Political Beauty has launched a provocative stunt called "Eating Refugees." It targets a law that prohibits refugees from flying into the EU without a visa. 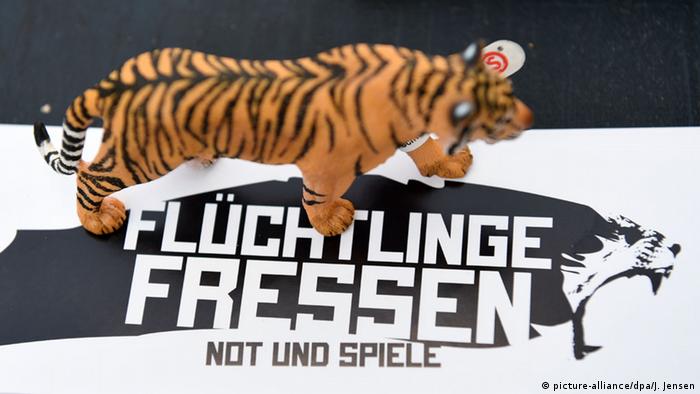 Known for its provocative actions blending theater and political activism, the collective of activists known as the Center for Political Beauty launched its latest intervention on Thursday. Called "Eating Refugees - Distress and Games" ("Flüchtlinge fressen - Not und Spiele"), it is an unusual spectacle.

Outside the Maxim Gorki theater in Berlin are four tigers in a cage. The caretaker is dressed like a Roman gladiator; his insignia refers to the European Union. In the background is a picture of Germany's President Joachim Gauck.

A huge poster shows a little girl asking her mother: "Why don't refugees just take a plane?" in reaction to the countless people who drown while crossing at sea or suffer trying to reach Europe on foot.

Against this setting, the group announced it was looking for refugees desperate enough to be ready to be devoured by those Libyan tigers. In a video, the activists claim that Angela Merkel and the German government, like a Roman emperor during a gladiatorial combat, have to power to stop this from happening with a simple thumbs-up gesture.

More concretely, the activists are calling on the German government to modify a law which prohibits airlines from taking on passengers to the EU who do not have a visa to enter the country.

The law opens the door to human traffickers who charge exorbitant fares and use perilous routes for migrants' passage to safe countries.

The activists demand a reaction from the Bundestag by June 24. If none comes, this will be considered a thumbs-down, leading to the next step of their intervention. They are chartering a flight on June 28 from Izmir, Turkey, to Berlin for 100 Syrian refugees waiting to join their families.

A crowd-funding campaign has been launched to raise the 80,000 euros ($90,000) needed for the flight of the plane called "Joachim I." The candidates for the flight introduce themselves with a short video, and sponsors can vote for the ones who should be saved first. 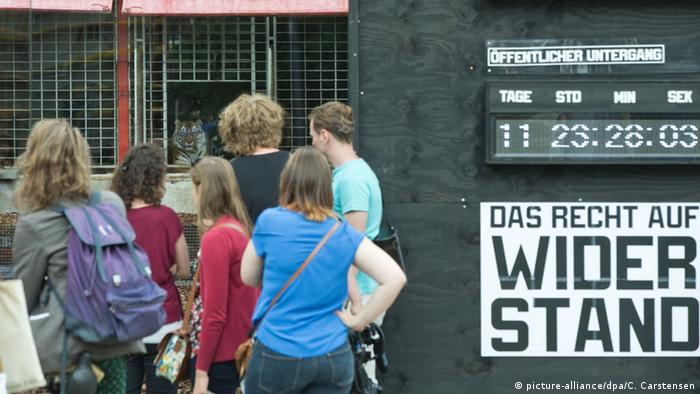 With 11 days still to go to the crowd-funding campaign, nearly a fourth of its goal was collected in one day

Will refugees be fed to tigers?

The group claimed to have already found at least one refugee ready to be devoured and are recruiting more through the campaign's website. According to their plan, the volunteering refugees will only be thrown to the tigers if the charter flight is blocked by German authorities. One alternative destination for the flight would be Vatican City, which is outside the EU. 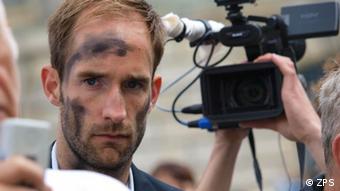 Phillip Ruch, "chief negotiator" of the Center for Political Beauty

Are the activists truly planning on going through with their barbarian plan? "Those who know us and our methods, know that we keep our promises," artist and chief negotiator of the group Philipp Ruch told the dpa news agency.

The artists say they intend to respect the animals' welfare during their project. They claim that the privately-owned tigers have more space in their cage than do refugees accommodated in the former Berlin airport Tempelhof. Daily public feedings are scheduled to further promote their campaign.

The collective is known for staging actions that grab the attention of the media. To draw attention to the plight of migrants, they organized a reburial in Berlin in June 2015 of the exhumed body of a Syrian woman who drowned while crossing the Mediterranean. The campaign was called "The Dead are Coming."

Last Wednesday, the Center for Political Beauty was awarded a Bobs, DW's prize for online activism, in the Arts and Culture category.

For the twelfth time, Deutsche Welle has honored exemplary online activists from around the world with The Bobs. Presenter Jaafar Abdul Karim introduced the laureates and their projects. Renowned TV hosts Yoani Sánchez from Cuba and Bassem Youssef from Egypt amongst others presented the winners from Bangladesh, Iran, Germany and India with their awards. (15.06.2016)

In a protest against the EU's refugee policy, the art collective "Center for Political Beauty" claims to have exhumed the body of a refugee in Italy who died in the Mediterranean. The remains were reburied in Berlin. (17.06.2015)

Just days before the 25th anniversary of the Fall of the Wall, crosses for escapees who died while trying to flee former East Germany have been stolen. Activists say some have been placed on the EU's border with Africa. (03.11.2014)