Police in Hong Kong have arrested three people after a skirmish broke out at a pro-democracy demonstration. This was the first such scuffle in two weeks. 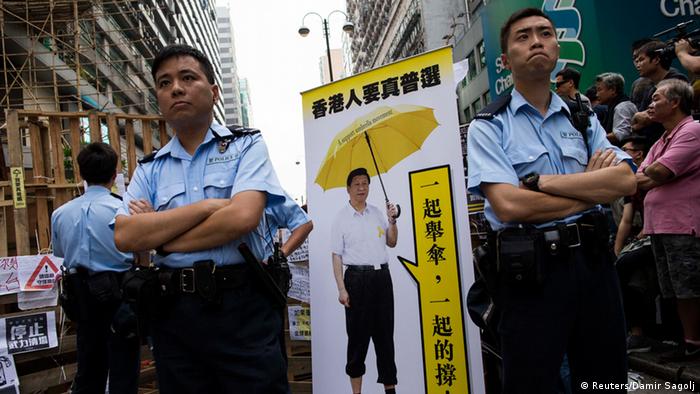 Scores of protesters were involved in the skirmish, which broke out around 2 am local time (1800 GMT Wednesday) in the Mong Kok residential and commercial area, news agency dpa said, citing local media South China Morning Post.

Dozens of police armed with batons and shields used pepper spray and made three arrests. The area was said to be calm a few hours after that.

The number of protesters is now a fraction of the tens of thousands who took part in mass demonstrations at the end of September. Talks between students, who make up the majority of the demonstrators, and government officials have failed to resolve the dispute.

One month of protests

On September 28, the pro-democracy group Occupy Central began to carry out its long-standing threat to lock down key parts of the financial hub, riding on the back of previous student-led rallies.

The group demands the resignation of Hong Kong city leader Leung Chun-ying and for free leadership elections to be held in the city in 2017. China's National People's Congress decided in August that any candidates would have to be vetted by Beijing before appearing on the ballot.

The demonstrations have carried on since September and been largely peaceful, but have caused major disruptions in the city. In mid-October, violence broke out following the surfacing of a video which showed plainclothes police officers beating a handcuffed protester as he lay on the ground.

In mid-October, the Hong Kong government agreed to a fresh round of talks with leaders of the student protest movement. Hopes were, however, low from the outset, as Beijing had been clear in its stance that it had already offered enough concessions to the former British colony in the past and that it would not change its position. In the end, the talks did not get the protesters what they wanted.

Hong Kong was handed back to China by the United Kingdom in 1997 under an agreement that foresaw the former British colony being granted a degree of autonomy unknown on the mainland for a period of 50 years.

The last time Beijing was faced with a pro-democracy movement on this scale resulted in the Tiananmen Massacre in 1989.

In Hong Kong, a meeting between government officials and the leaders of a student protest movement has begun. A breakthrough is not expected, but the government has indicated possible concessions. (21.10.2014)

Pro-democracy activists in Hong Kong have suspended a vote on the next steps for their protest against a proposed electoral reform by China. The organizers said they couldn't agree on how the movement should proceed. (26.10.2014)