Thousands take part in pro-Europe demonstrations ahead of elections

With just a week to go before EU elections, tens of thousands of people took to the streets across Germany in support of Europe. Concerned by the rise of the far-right, marchers hoped to motivate others to vote.

One week before voters head to the polls for the European Parliament elections, tens of thousands of people took to the streets in Germany on Sunday to voice their support for Europe and to send a message against nationalism and the far-right.

Organizers estimated that 45,000 people took part in the Cologne march — far exceeding the 25,000 they had expected.

Two members of "Grandmas against the right" protest group told DW they wanted to come out to support Europe at the protest in Cologne because they fear that Germany and Europe are returning to a dark chapter in history.

"We were told by our own grandmas and grandpas about what life was like under the Nazis," a 65-year-old protester named Walli told DW. "But there's a gap in knowledge about it."

The chairwomen of Germany's Social Democrats, Andrea Nahles, and the party's main candidate for the European Parliament election, German Justice Minister Katarina Barley, participated in the rally in Cologne.

"One Europe for everyone is not a Europe of nation states where everyone fights each other," Nahles wrote on Twitter. "We had that already and the result is well-known."

"A Europe for everyone is, above all else, a social Europe that holds together — especially against the right. That's what we're protesting for today and it's what we stand for in this election," she added.

Although the marchers support Europe, many say that the EU needs to undergo some major changes if it is going to be successful in the future.

"Of course the EU needs to change — we need much stronger cooperation," Susanne Helm, a 50-year-old with the "Pulse of Europe" movement told DW. 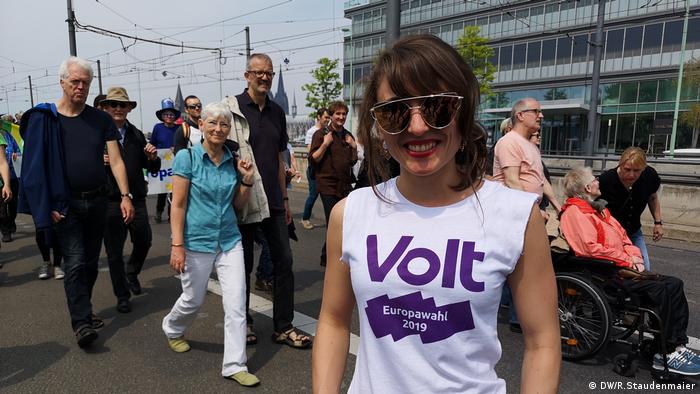 "I grew up with Europe and I'm here because we need to wake up and not take things for granted," Lis Leifgen said.

The 28-year-old is a member of the Volt party, a newcomer on the political scene who is hoping to make it into the European Parliament for the first time.

"For us, it's important to look for solutions, but not on a national level, but on a European one," Leifgen said of the party, which describes itself as the first "pan-European" party.

Combatting the far-right, pushing for change

The German marches took place under the banner of "One Europe for Everyone: Your Voice against Nationalism," with over 100 civil society organizations and political parties backing the marches.

Although demonstrators took to the streets in support of the EU, organizers also called for changes to the bloc.

"The EU must change if it is to have a future," organizers wrote on the protest's website. They urged for changes to promote diversity and guarantee social justice, as well as defend human rights — particularly for asylum-seekers and those in need of rescue in the Mediterranean Sea.

Marches and other pro-EU events are taking place in cities across Europe, including in Poland, Romania, Hungary, Sweden, Austria, Spain, Italy, France, the Netherlands, Denmark, the United Kingdom, and in Bulgaria. Many of the protesters are concerned that euroskeptic and far-right parties could score major wins in the upcoming May 23-26 elections, particularly with voter turnout rates for the EU vote low across the bloc.