Amid sub-zero temperatures, anti-government demonstrators have rallied in Chisinau to decry corruption. Earlier this month, protesters stormed parliament as a new pro-European government was approved. 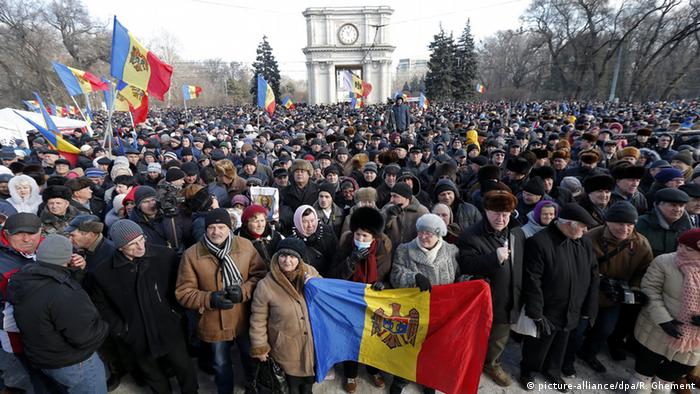 More than 15,000 protesters converged on the streets of the nation's capital Chisinau to rally against the government and demand early elections.

"The people are with us. They do not want to support oligarchs and the criminal authorities," opposition leader Andrei Nastase told protesters, according to the AFP news agency.

A new, pro-EU prime minister has been selected by the eastern European country's parliament. Some 8,000 people protested against the new government, displeased with PM Pavel Filip's ties to a prominent oligarch.

Moldova signed an historic EU association agreement in 2014 despite staunch opposition from Russia.

Demonstrators are particularly enraged at the disappearance of some $1.5 billion (1.39 billion euros) from three of the country's banks prior to parliamentary elections in 2014.

On Wednesday, protesters stormed parliament after a new pro-European government was approved. The country's pro-Russian and pro-Western forces have been known to suspend their differences to challenge the country's ruling elite amid the political crisis.

The Moldovan parliament has until January 29 to form a new government or it will be dissolved, a key demand of the protesters.

Since demonstrations erupted in 2014, the ex-Soviet nation has had five prime ministers.

After Russia declared a partial military mobilization, protests erupted and thousands have tried to flee. What does this mean for Putin and his power base? Our guests: Daniel Brössler (Süddeutsche), Maria Makeeva (Ost-West TV), Roman Goncharenko (DW)