As many as 25,000 asylum applicants and their supporters have demonstrated in central Tel Aviv against plans for a mass expulsion. Rights groups are optimistic that a delay by the top court could keep them in Israel. 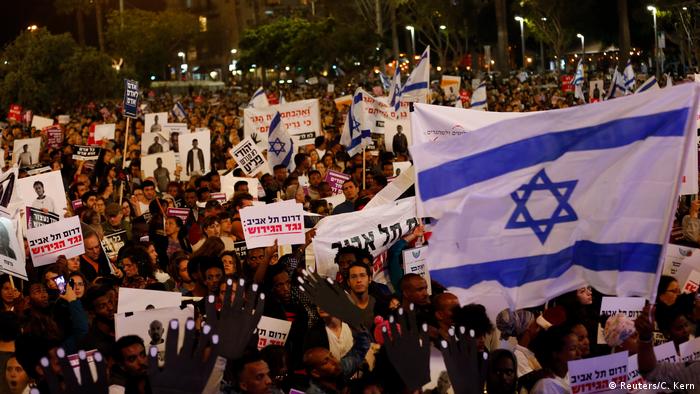 Migrants and Israelis took to the streets of central Tel Aviv on Saturday to protest plans to deport thousands of Eritrean and Sudanese asylum applicants.

Haaretz newspaper reported that about 25,000 people participated in the rally.

Israel's government has ordered the migrants to leave for an unnamed destination in Africa in exchange for €2,800 ($3,500) and a plane ticket — or be locked up indefinitely.

Other asylum applicants were deported to Uganda and Rwanda.

The deportations were due to begin in a week's time, but Israel's supreme court earlier this month temporarily blocked the controversial plan after a legal challenge from groups opposed to the deportations. The Israeli government has been given until Monday to file its response.

Several migrant aid organizations publicized Saturday’s protest on social media, calling for alternative solutions to the deportations, including moving the migrants outside of Tel Aviv, where most of them live.

Support groups are concerned people's lives would be put in danger if they are expelled to African countries. They said the government’s plan is a stain on Israel's image as a refuge for Jewish migrants. 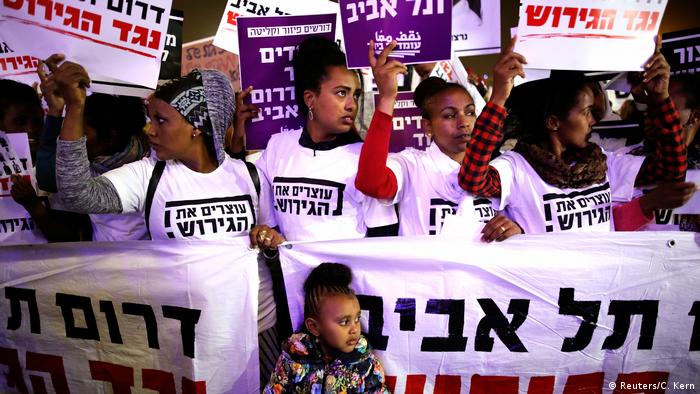 Among those addressing the rally was Sudanese migrant Monim Haron, who told the crowd how he had "survived genocide" in his home state.

"For 14 years the government has deliberately attacked its citizens with chemical weapons," he was quoted as saying by The Times of Israel. "Just this week, the region where I was born and raised was attacked again, and again dozens of people were killed, mostly women and children.

Israel's Interior Ministry said there are some 42,000 African migrants in the country, mainly from Sudan and Eritrea. Most of them began arriving in 2007, through the border with Egypt's Sinai Peninsula.

The government insisted it has no legal obligation to allow them to stay but has also said it will exempt children and those of retirement age from the deportation order — although local media reported that many men over 67 have received expulsion notices.

Israeli Prime Minister Benjamin Netanyahu said earlier this week that a tide of non-Jewish immigration would threaten the very fabric of Israel.

During Saturday's protest, Education Minister Naftali Bennett, head of the far-right Jewish Home party, appealed to the government in a tweet not to give in to those opposed to the deportations.

Describing the migrants as "the illegal infiltrators" who enter Israel in search of work, he said allowing them to stay would turn the country into "an employment agency for the entire world."

It was the fourth such tunnel destroyed by Israeli forces in as many months. The Israeli military also launched an airstrike against an underground military complex in Gaza. (18.03.2018)