Thousands took to the streets of Madrid to mark the fifth anniversary of a protest that created Podemos, now Spain's third-most popular political party. The "Indignados" movement has left its mark on Spanish politics. 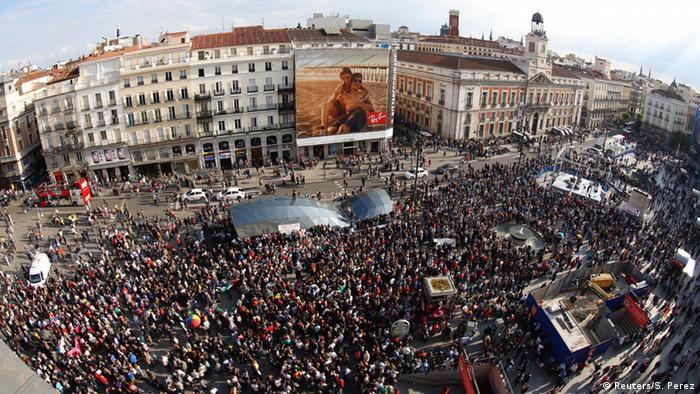 Thousands of Spaniards marched through Madrid on Sunday to mark the fifth anniversary of a protest movement that ushered in a new age of politics in the country and left an impact across the globe.

The march converged on Madrid's Puerta del Sol square, where on May 15, 2011, a spontaneous protest turned into a 28-day occupation to challenge austerity, big banks and an established political class unable to tackle the country's economic and social woes.

Calling themselves "Indignados," or the outraged, the movement brought a number of political views under its umbrella. It later influenced similar movements such as the "Occupy" movement in the United States.

In commemorating the movement on Sunday, Spaniards were not only marking their own anniversary but were also passing on their support to new movements such as the "Nuit Debout" (Rise up at Night) protests.

That budding movement in France is gaining traction and spreading to other countries. On Sunday it held an international day of action, World Debout, with plans to take over public spaces in countries across Europe and around the world.

In Spain, the so-called M15 movement, named after May 15, spawned the birth of Podemos, which emerged as the third-largest party in December elections.

Those elections led to four parties emerging from the traditional dominance of the conservatives and socialists.

Coalition talks have failed and early elections are scheduled for late June. The country is currently ruled by a conservative Popular Party caretaker government.

On Friday, Podemos and another smaller party, the United Left party, came together under an alliance called "United We Can," an alliance that could attract more support in upcoming elections.

The "Indignados" movement also had an impact on local government where activists secured roles in several towns and cities, including Barcelona and Madrid.

France's "Nuit Debout" protests have morphed into a leaderless citizens' movement aimed at giving a grassroots voice to at least one slice of the French population, reports Elizabeth Bryant from Paris. (19.04.2016)