Spain′s Podemos, IU sign left-wing deal that could spell trouble for Socialists | Europe| News and current affairs from around the continent | DW | 11.05.2016

Spanish anti-austerity party Podemos has joined forces with the communist United Left. The alliance could place second in polls and pose a grave threat to the once-powerful Socialists. Santiago Saez reports from Madrid. 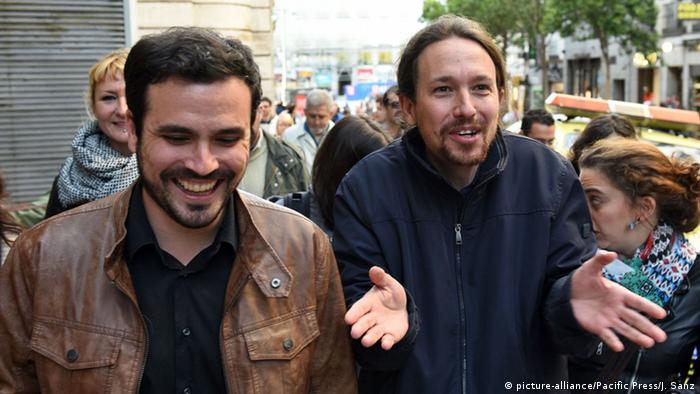 Sorpasso (an Italian term meaning 'overtaking') is the word you hear everywhere in Spain this week. It was first used in politics in the 1970s to refer to the possibility of the Communist Party becoming the strongest political force in Italy. In the 1990s, Spanish communist leader Julio Anguita brought it back in discussing the eco-communist United Left's failed strategy to overtake the social-democratic PSOE and gain hegemony of the left. Now, rumors of sorpasso are back.

Anti-austerity party Podemos and the United Left (Izquierda Unida - IU) reached a coalition deal on Monday evening, agreeing to campaign as an alliance ahead of the June 26 elections. For the first time since Spain restored democracy in 1978, PSOE faces a real possibility of losing its position as one of the two strongest parties.

The left in flux

Five years ago, on May 15, 2011, political and economic frustration in Spanish society crystallized in massive protests all over the country. The "indignants" camped at the Puerta del Sol Square in central Madrid were at the center of the demonstrations, which brought together activists and other members of society, most of whom had not been politically active previously. The aftermath of those demonstrations was marked by the birth of Podemos in 2014, which has since risen to be the third-largest political party in the country.

United Left, on the other hand, has had a much longer run as a political party. The group, a coalition itself, was founded in 1986, and has a more traditional left-wing approach, exemplified by outspoken republicanism. Although it has a solid base of around a million voters, the group has repeatedly felt the brunt of the electoral law, obtaining only two seats in the last elections. The party's leader, Alberto Garzon, is consistently pointed at by most polls as the most popular politician in the country.

Podemos and IU already ran in coalition in the 2015 general elections in Catalonia, Valencia and Galicia as well as locally in several cities with impressive results. The group was the top winner in Catalonia and beat PSOE to second place in both Valencia and Galicia. Locally, the coalition governs the cities of Madrid and Barcelona, among others, an indication of strength in urban areas. 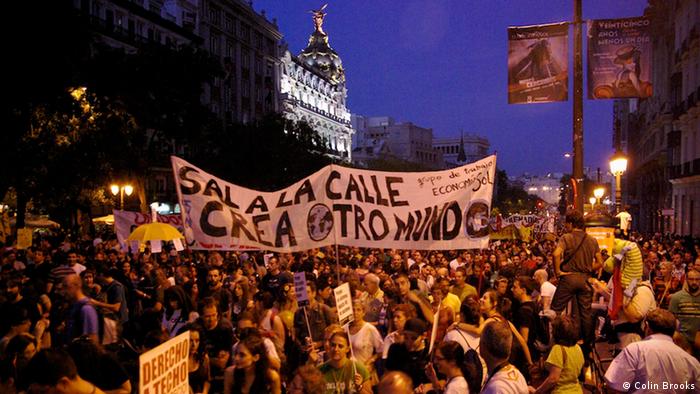 Podemos formed out of the "indignados" protest movement

The alliance is also strong among younger voters. Data released last week by the National Center for Social Research shows that the sum of the two parties is the first choice for voters under 55.

Federico Santi, Europe Analyst at Eurasia Group, says Podemos could, over time, replace PSOE at the helm of the left: "The 'ideological space' to the right and to the left of PSOE is now fully occupied [by Ciudadanos and Podemos respectively], so the prospects for the Socialists are difficult in any case. Clearly, finishing third would be a major setback for PSOE and fully establish Podemos as the main party on the left. It would also most likely trigger a leadership change within the Socialist party, and worsen existing internal divisions. Over time, only a splintering of Podemos into its component groups could reverse this process."

Podemos leader, Pablo Iglesias (photo at top of article, alongside IU leader Alberto Garzon), has stated that the coalition is not interested in overtaking PSOE: "For us, sorpasso means taking over the [governing] People's Party," he said at a press conference. Iglesias added that the new coalition considers PSOE an ally and opened the door to include them in a deal. The social democrats' leader, Pedro Sanchez, replied swiftly: "No, thanks."

Falling into third place would have dire consequences for PSOE. The party would have to choose which way to veer: Left towards Podemos and IU or right towards Ciudadanos and PP. Either side is likely to need the Socialists' support in order to elect a government, so the party could opt to block both sides by voting against them and forcing new elections. That would, however, be extremely unpopular. Whatever they choose, the Socialists would lose their central position at the political table. 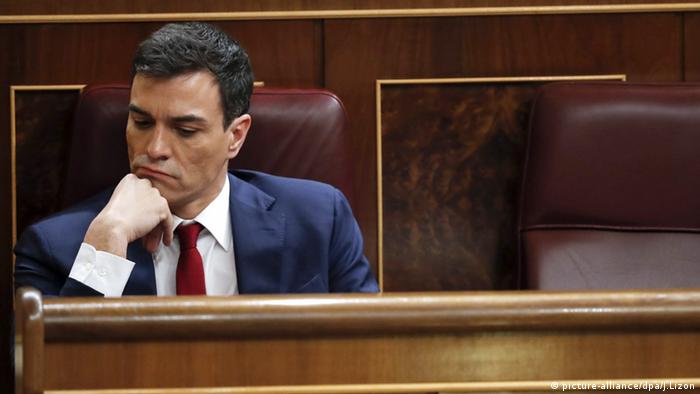 Pedro Sanchez faces tough times as head of the PSOE

"A left-wing administration will be even less realistic if Podemos-IU manages to overtake the PSOE, given that this would probably lead to the resignation of Sanchez and generate considerable turmoil within the party," Antonio Barroso, senior vice president at Teneo Intelligence," told DW. "Regardless, the Socialists would be extremely wary of supporting a Podemos-led administration." Supporting or allowing a PP-led government would be "an option of last resort" for the social democrats, he added.

Celeste-Tel, the only pollster that has factored in the coalition so far, predicts a tight race. According to their survey, a Podemos-IU ticket would win more votes than PSOE, but fewer seats in parliament. The electoral law, which rewards vote concentration and rural districts, would allow PSOE to keep its edge, but the difference would be minimal (5-10 seats compared to 19 in the December elections). However, there's still a long campaign ahead, and media-savvy Iglesias and Garzon have shown that they can shine in the run-up to an election.

Thousands took to the streets of Madrid to mark the fifth anniversary of a protest that created Podemos, now Spain's third-most popular political party. The "Indignados" movement has left its mark on Spanish politics. (16.05.2016)

Spain's anti-austerity party has dealt a blow to the Socialists after it said it would not support a new coalition pact. The announcement comes as Spain tries desperately to break out of a political deadlock. (24.02.2016)