Nuit Debout: Middle-class protests in France | Europe | News and current affairs from around the continent | DW | 17.04.2016

A Nuit Debout (Up All Night) demonstration turned violent after President Hollande said he would keep controversial new labor laws. The French political scientist Claire Demesmay explains what is behind the movement. 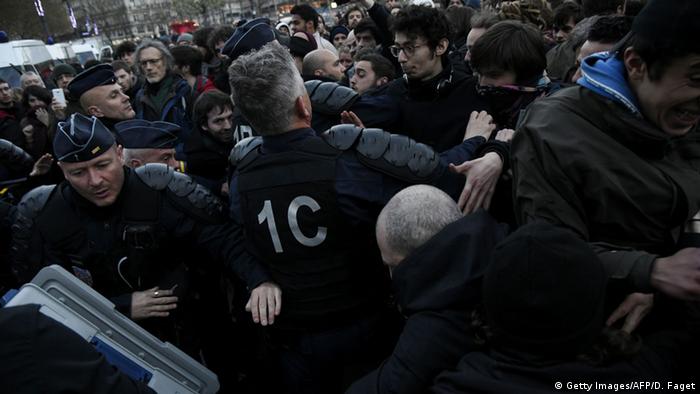 Ms. Demesmay, what has upset the members of the Nuit Debout movement so much?

Claire Demesmay: You have to understand what this movement is about and what it wants. It encompasses many small movements. What unites them all, and one reason for the commotion, is their criticism of the elite, along the lines of, "Those at the top are looking after their own interests; they do not listen to us." The feeling of not being represented and not being taken seriously is widespread. Furthermore, the majority of French people are against Francois Hollande running as Socialist Party candidate in the next presidential election, and that is exactly what he did not rule out in this television appearance. That has exacerbated this feeling.

How broad is this movement? Is it made up mostly of society's losers?

No, they are not the losers; that is the interesting thing. This group comes from the middle class. These people have skills. They have university degrees; they are educated and cultured. So it is not necessarily the people who are threatened by mass unemployment. The working class is poorly represented in the movement, as are the banlieues. There is an attempt to involve the banlieues, but so far it has not worked that well. That means that the real losers are barely represented.

The anger is obviously directed at Hollande's attempt to loosen labor laws. Is easing the laws not necessary to reduce the high unemployment level in France?

The labor reforms seem unjust to many; they do not want to work under worse conditions. The great dream remains the open-ended employment contract. People think it would be jeopardized by the reforms. Of course, there is a common interest in fighting against unemployment, but opinions vary widely on how to achieve this.

Many French people do not see this only as a government crisis, but rather as a national crisis. What is this crisis? 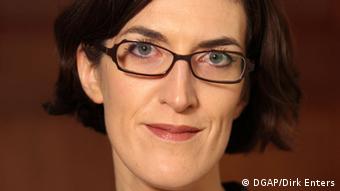 Demesmay: Some citizens no longer understand the world

Part of the crisis is, as I said, the fact that the elite is considered to be untrustworthy. There is also an economic and social crisis. In my opinion, there is also an identity crisis. It is strong, and it is not new either; it has existed for some years now. It also partly explains the success of a party like the National Front. Many French people distance themselves from globalization and European politics as well.

Some citizens do not understand the world anymore; they no longer understand France's place in this world and the world of the future. And then the reactions are denial and dissociation. One of the effects is criticizing the elite. There are, however, other effects and forms of expression. One of them is xenophobia; another is Euroskepticism, and even skepticism about the euro. And it's hard to find a concrete answer, because the fears are vague. Not only are there a number of questions and aspects, but different parts of the population express them differently.

Next year, presidential elections will be held. Hollande will probably not be re-elected; he is more unpopular than any president before him in recent history. Who would be able lead the country out of the crisis?

French authorities have warned any violent protests tied to the Nuit Debout movement will face justice. The two-week old Nuit Debout protests have been largely peaceful. (15.04.2016)

Despite protests, Hollande sticks to his guns on labor reform

French President Francois Hollande has vowed to press for controversial labor reforms amid growing civil disobedience. The unpopular president said he'll decide by the end of the year whether to run for re-election. (15.04.2016)

The former National Front leader has been fined thousands for belitting the historical role of the Nazi regime. He has become infamous for such statements throughout his career. (06.04.2016)

That is a very good question. Whoever knows the answer to that question might win the elections - or become rich. I believe that the country needs a strong personality, but also someone who is convincing, and who doesn't just come and assert certain things. There are many tensions and divisions in French society, and the last thing the country needs now is someone who plays with the tensions and exacerbates the divisions. ...

Like Marine Le Pen of the right-wing National Front.

Yes, of course. The nation does not need someone like Marine Le Pen. But Nicolas Sarkozy also pitted parts of the population against each other in his election campaigns of 2007 and 2012, and that would make the situation worse.

The political scientist Claire Demesmay heads the France and Franco-German relations program at the German Council on Foreign Relations in Berlin.

The interview was conducted by DW's Christoph Hasselbach.