Despite protests, Hollande sticks to his guns on labor reform

French President Francois Hollande has vowed to press for controversial labor reforms amid growing civil disobedience. The unpopular president said he'll decide by the end of the year whether to run for re-election. 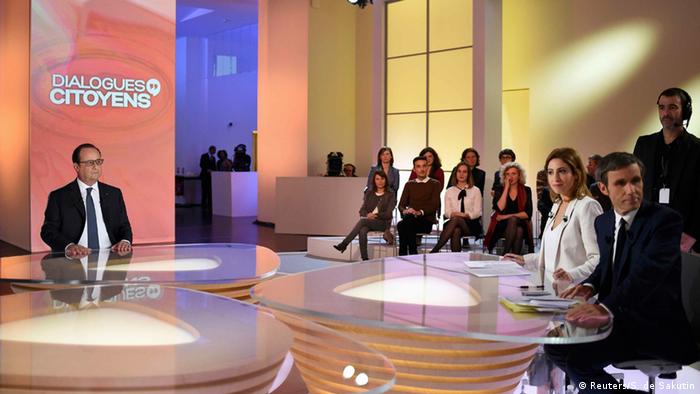 Francois Hollande insisted he's standing firm on labor reforms that have angered his left-wing base. In a nationally televised appearance Thursday he said the government won't back off from controversial changes.

"I have undertaken policies that are producing results now and that will continue to produce results," Hollande told French TV viewers. "I ask to be judged on the issue of unemployment."

Protesters demonstrating against the labor law reforms clashed with riot police in Paris and several other cities late Thursday as a crowd of around 1,700 massed in the capital in the afternoon, and police said seven officers and four protesters were injured in the ensuing scuffles.

Part of Hollande's far-sweeping labor bill would relax employee protections governing France's 35-hour work week and layoffs. The changes have sparked weeks of civil unrest across the country and repeatedly pushed ministers to tinker with the proposal in an effort to make it more palatable. 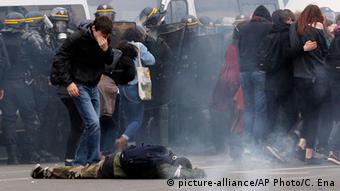 France's unemployment rate is hovering around 10 percent and rising amid tepid job growth in other large European economies.

But the French public appears deeply skeptical over the reforms, and Hollande's popularity has taken a nosedive to make him one of the most unpopular presidents of the fifth republic's history.

Hollande was elected in May 2012 on his Socialist Party's left-leaning platform but quickly changed tack ,as the economy faltered, to embrace more business friendly reforms. That's eroded support among traditional backers and brought unions onto the streets to protest. 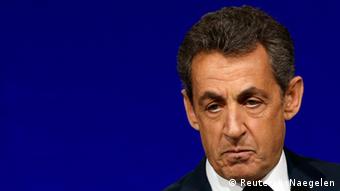 "There's a feeling of deep betrayal," 27-year-old protester Mariam Aueto told The Associated Press last week. "This government is doing the opposite of what we elected it to do."

Recent polls have shown Hollande failing to make the second run-off round of the election, regardless of who runs against him, with far-right leader Marine Le Pen seen making it to the runoff.

Nicolas Sarkozy, a conservative former president, is polling no better. Sarkozy has indicated he wants to return to power but faces competition within his own party.

Hundreds of thousands protest across France against labor reforms

Nationwide strikes are being held in France to reject a government reform which would relax the 35-hour working week and other labor rules. Public transport, hospitals and schools have all been affected. (31.03.2016)

France's least popular recent government wants to slay the country's most sacred political cow. With 14 months before a presidential election, incumbent Hollande faces opposition from his own party and on the streets. (24.03.2016)

The Paris prosecutor has initiated the process to request the terror suspect's extradition to France, Hollande said. The French president warned of "extensive networks" across Europe, saying more arrests were likely. (18.03.2016)