France's least popular recent government wants to slay the country's most sacred political cow. With 14 months before a presidential election, incumbent Hollande faces opposition from his own party and on the streets. 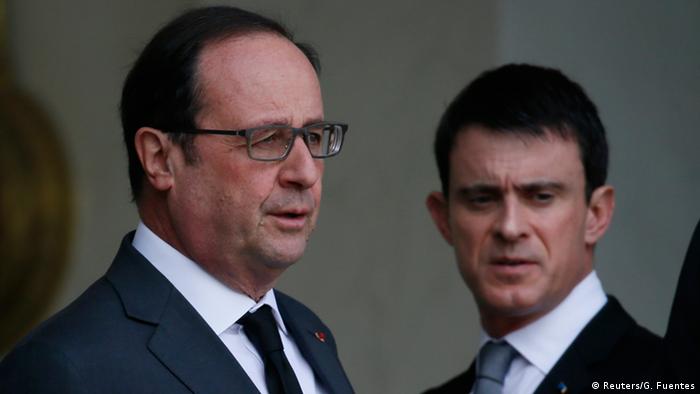 The labor code (Code du Travail) has traditionally been regarded in France as untouchable, with successive governments making piecemeal amendments to its 10,000 articles, lifting restrictions on layoffs and working hours, but without a comprehensive overhaul.

Until now. The changes proposed by President Francois Hollande (above left) and his Socialist Party Prime Minister Manuel Valls (above right) are seen as a test of the reformist credentials of the government and possibly also a turning point in France's struggle with 10-percent unemployment nationwide.

They are also seen as a test for Emmanuel Macron, the country's economy minister, who is reportedly behind its most controversial measures.

On a wider level they also play into wider debates about the sustainability of France's social and economic model, and moving the country - for many reluctantly - towards a less regulated approach to business.

The government's draft law aims to amend the 35-hour working week and relax other labor rules. The 35-hour week would remain as the foundation, but the proposal would allow companies to organize alternative working times without industry-wide deals. Workers would also be able to put in a 48-hour week or 12-hour shifts.

The reforms are scheduled to be taken up by parliament's social affairs committee on April 5 and by a full parliamentary sitting in late April or early May. But it remains to be seen whether the French government can assemble a parliamentary majority to enact even a weakened version.

Meanwhile, protestors against the law, commonly referred to as the ‘El Khomri law' after Labor Minister Myriam El Khomri, hit the streets on Wednesday and Thursday. 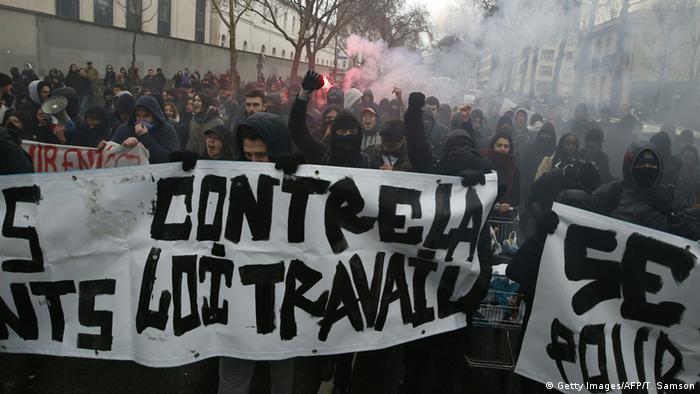 'Against the labor law,' this student banner in Paris reads

Security forces attacked students with tear gas on Thursday after students threw bottles at riot police in Paris. In the western city of Nantes, students hurled bottles at security forces who used tear gas and truncheons against the students and made nine arrests, police said.

Students have been at the forefront of protests over the reforms aimed at freeing up the job market. They plan an even bigger mobilization on March 31 alongside unions and the left flank of Hollande's Socialist Party. They argue the reforms are too pro-business and threaten workers' rights.

The seven unions and youth groups which called Thursday's protests are demanding the complete withdrawal of the reforms.

Students last week paralyzed schools and universities across France and on Thursday barricaded campus entrances in Paris. Protests were also under way in Rennes and Marseille. An online petition against the proposed reform has already gathered more than 1,000,000 signatures, a French record.

"Young and insurgent, the world is ours" read one banner as hundreds gathered at Place d'Italie in the south of the French capital, where riot police used tear gas.

Unions have claimed that half a million people took to the streets around the country, while the government put the figure at a quarter of a million.

"You have to be very careful with youth protests," Le Canard Enchaine, an investigative weekly, cites Hollande as saying last week. "You never know how things might pan out."

Meanwhile, Socialist Party dissidents, threatening resistance when the reforms reach parliament, have also presented a "counter-reform." The protests are being led by former Socialist Party leader and author of the 35-hour week, Martine Aubry, who has resigned from all her official positions within the party, condemning the law as a betrayal of the French "social contract."

Valls, however, has said the reforms are "intelligent, audacious and necessary," in particular for reversing unemployment.

"Our country has become used to [joblessness] for too long," he said. He believes the proposed changes would align France with the more flexible hiring and firing rules applied in Germany, Britain and Scandinavian countries. Valls has blamed France's high levels of unemployment - 3,500,000 people or 10 percent out of work - on laws which create "barriers to the labor market."

Today 90 percent of jobs created in the private sector are on short-term contracts which offer no guarantees at all, he said.

The reforms have aleady been watered down under pressure from an earlier wave of protests. The increasingly unpopular Hollande hopes to stand for re-election next year, with 58 percent of the French people opposed to the measures, according to a recent poll.

Businesses are also not fully happy with the watered-down version of the reforms, in particular the withdrawal of a cap on the amount companies must pay for unfair dismissal. They are also angry about the scrapping of a measure to allow small and medium-sized companies to unilaterally introduce flexible working hours.

But these concessions, Valls argued, were necessary to persuade several reformist unions to get behind the new version.

In 2000, the center-left government of Lionel Jospin enacted a 35-hour working week, down from 39 hours. Five years later, conservative Prime Minister Dominique de Villepin enacted a policy based on the New Employment Contract (CNE). In 2006, his attempts to pass the reforms were met by student and union protests; the conservative president, Jacques Chirac, eventually repealed it.

"At best, the mountain will give birth to a mouse as Francois Hollande's usual balancing act will take precedence over bravery," said Nicolas Sarkozy, ex-president and head of center-right main opposition party, Les Republicains.

Some commentators suggest the proposals are a "kamikaze" act by a president who knows he cannot be re-elected and have been widely compared to the proposed reforms of former German Chancellor Gerhard Schroder from 2002 to 2005.