France's "Nuit Debout" protests have morphed into a leaderless citizens' movement aimed at giving a grassroots voice to at least one slice of the French population, reports Elizabeth Bryant from Paris. As an evening sun elbows out a rainy day, the crowd picks up at the Place de la Republique. One corner of the iconic Paris square is devoted to political meetings, including a section where a group is carving out a new French constitution. A few yards away, a woman speaks tearfully about the lack of democracy in the Republic of Congo, as a crowd of several hundred waggles hands, one of the special signals here of agreement.

There are also colorful sideshows, including a fencing match pitting two scantily-clad young women, and a songfest gathering dozens of Algerian Berbers.

"I want peace in the world," said 70-year-old Said Jaaoua, from the northern city of Tizi Ouzou, who discretely cradles a can of beer.

Deep into its third week, France's Nuit Debout - or "Up All Night" - defies easy stereotypes. The social movement that began March 31 to protest government-proposed labor reforms has morphed into a leaderless and hodgepodge citizens' movement aimed to occupy, to recreate and to offer a grassroots voice for at least one slice of the French population.

Some observers compare it to the May 1968 protests in France, when occupied universities, massive demonstrations and crippling strikes left a long-term mark on the country. Others to social movements like Occupy Wall Street in the United States or the Indignados uprising in Spain that gave rise to the leftist Podemos party.

Still others have poked fun at it. French cartoonist Xavier Gore, of "Le Monde" newspaper, depicted a bunch of penguins gathered with the tagline: "Let's meet here every night until we can figure out why." 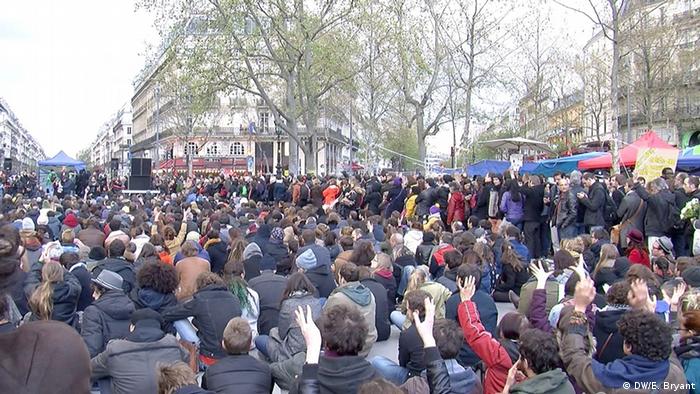 How it will end is anybody's guess.

"It might peter out, it might be violently repressed or it might produce something that is completely new," says 38-year-old biology teacher Guillaume Thomsen, who has already participated in a Nuit Debout in Lyon and was checking out the one in Paris. "But I think it could be really important and I want to be part of it."

Police stand guard on the edges of the square, some with riot shields. Side streets are lined with squad cars, with officers prepared for another night of unrest.

While the movement is largely peaceful, many nights end with clashes pitting them against hardcore groups of rock-toting protesters. Other altercations take place in broad daylight, with students pelting bottles and other objects at police who respond with teargas.

Nuit Debout has quickly spread to other towns around France and crossed into neighboring Belgium, Spain and Germany. Today, thousands of people attend the nightly happenings that in the French capital stretch across most of the day as well.

"It's the springtime of re-politization," said Jean-Christophe Cambadelis, head of the country's ruling Socialist party.

For political science student Joy Gromil, who attended as part of a research project, the movement underscores a deep political crisis in France.

"We don't trust the people leading us anymore," she said. "What we are trying to find is not a new leader, but a new country." 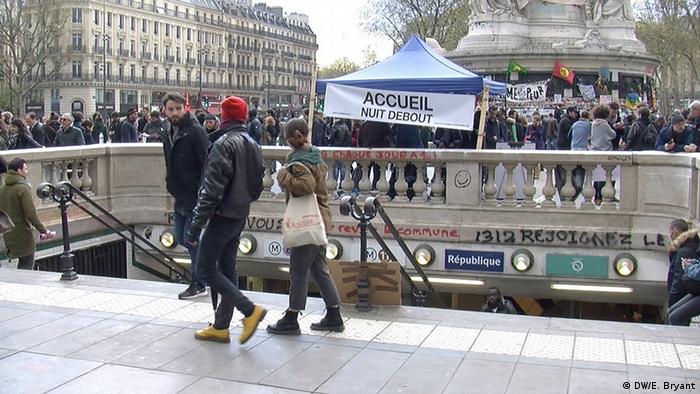 There are plenty of reasons feeding youth discontent, starting with President Francois Hollande, whose popularity has sunk to new lows. Draft legislation by his Socialist government to reform France's labor system and help turn around the country's high unemployment have particularly infuriated French youngsters, with tens of thousands of students taking to the streets last month to demand its withdrawal.

Local news reports suggest many politicians are either trying to minimize the movement or discount it, if they can.

For his part, Hollande has called the youth reaction and Nuit Debut "legitimate."

"I was once 20 years old, and I was also involved in a movement because there were injustices and inequalities and the world was not going the way it should," he said on primetime TV, in remarks that suggested it was simply a youthful phase.

Many center-right politicians are less generous. Former prime minister Francois Fillon joined other conservatives in saying he was "shocked" that the movement was allowed to continue despite the ongoing state of emergency put in place after November's terrorist attacks in the capital.

But another politician, Nathalie Kosciusko-Morizet, said her fellow conservatives were missing out.

"We need to go to the Place de la Republique," she told the weekly "Journal de Dimanche" newspaper. "A generation is asking questions." 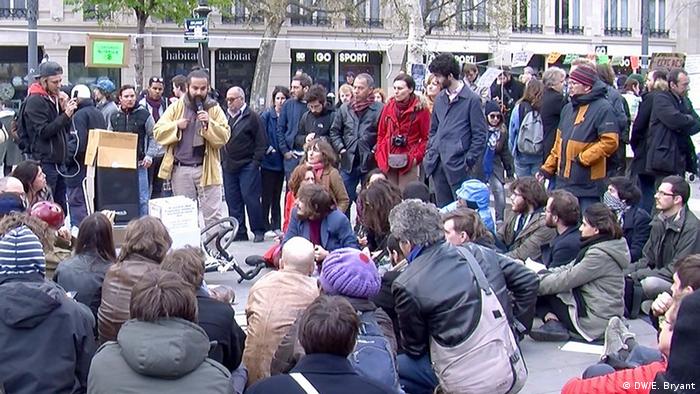 "I'm bringing you solidarity from Athens … and one request: Don't let this energy go to waste," Varoufakis told a cheering crowd.

Not everyone stays. French philosopher Alain Finkielkraut beat a hasty retreat on Saturday under a hail of boos and insults.

Despite the incident, there is generally a tolerance for diversity.

A woman from the woman from the Republic of Congo spoke out against prison abuses, while an unwashed 44-year-old man sporting earrings and a ponytail said he was fighting for poverty.

"The youth make sense to me, it's important to defend their cause," said the man, who gave only his street name, Drake.

Asked what that cause was, he answered: "Poverty. And since I'm on the street, I have to fight."

Middle-class kids on the streets

Still the sticking power of Nuit Debout remains uncertain. An OpinionWay poll published last week by French newspaper "20 Minutes" found that while 70 percent of French youth support the movement, one-third said they would not take any action to do so.

And despite its rainbow sheen, Nuit Debout has yet to galvanize the ethnic immigrant youngsters from the gritty banlieues who spearheaded France's last major youth uprising - the 2005 riots against police brutality and injustices.

"As in 1968, it's the middle-class kids who are in the streets, not the already disenfranchised children of the children of the suburbs, with their record youth unemployment," prominent French journalist Pierre Haski wrote in Britain's "Guardian" newspaper. "It's a social divide that has been highlighted as a weakness of Nuit Debout, with the risk of self-congratulatory 'entre-soi.'"

Still for many Parisians, the daily protests are offering a splash of color and something the city arguably hasn't seen during the many months since the terrorist attacks: hope.

That was the sentiment echoed by Marion Chataign, 60, who wandered through the crowd with her family.

"I live nearby and every time I go somewhere I drop by," she said. "I like seeing all these young people and not so young people together, trying to change something. Maybe it's utopian, but it makes me happy."

French authorities have warned any violent protests tied to the Nuit Debout movement will face justice. The two-week old Nuit Debout protests have been largely peaceful. (15.04.2016)