The Saxon city's mayor has called for awareness of the brutalities of war that continue even in the 21st century. During World War II, Allied forces firebombed the eastern German city, leaving 25,000 people dead. 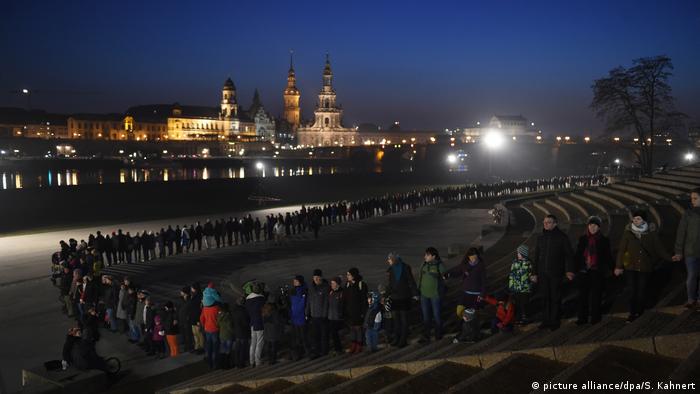 The history of Dresden's Frauenkirche

Dresden's Frauenkirche was destroyed during the Second World War. Donations funded the church's reconstruction and it has become a landmark and tourist attraction.

Around 12,000 people on Monday gathered in Dresden and joined hands to form a human chain in a message of "peace and reconciliation" marking the anniversary of the deadly firebombing of the city by Allied forces towards the end of the Second World War.

The act aimed at reminding the participants of the brutal bombing, considered one of the Allied forces more controversial acts during the war.

"In this world, several conflicts are being carried out in a warlike manner and human rights are being trampled on," said Dresden Mayor Dirk Hilbert.

"This suffering affects us directly in a globalized world," he added, placing a white rose on a memorial of the controversial attack.

However, Hilbert also recalled the atrocities committed by the Nazi dictatorship, questioning why many of the city's citizens lacked humanity for the "destitute" of that time, whether a "Jew, homosexual or an oppositionist."

This recollection "has to strike the bridge into the present," the Dresden mayor said.

The firebombing of Dresden on February 13 and 14, 1945 is believed to have left approximately 25,000 people dead, according to an official study conducted in 2008.

Since 2014, the city has witnessed a surge in far-right activism, with rallies organized by anti-Islamization group PEGIDA pulling thousands of demonstrators and counter-protests.