Thousands living in the shadow of a rumbling volcano on Indonesia's resort island of Bali fled Wednesday as fears grow that it could erupt for the first time in more than 50 years. 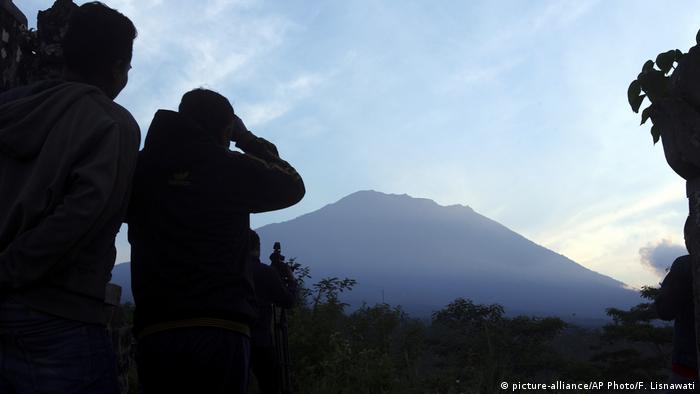 Mount Agung belched smoke as high as 700 metres (2,300 feet) above its summitlate Tuesday afternoon, sparking an exodus from the settlements near the mountain. Nearly 1,600 people died when Mt. Agung last erupted in 1963.

It stirred to life again in September, prompting about 140,000 people to leave the area. Many returned home after the volcano's activity waned, but thousands are now fleeing again. Some 30,000 people remain displaced, officials said. "There are 13 of us and we're afraid. Our neighbours have also fled," said Nyoman Sadi, a local resident who said she was leaving with her family.

Disaster officials have warned that fresh activity at Mt. Agung could see it blow its top. But the head of Indonesia's volcanology centre urged people to remain calm and said the mountain's alert level has not yet been raised. "Yesterday there was smoke and steam as high as 700 metres, and last night there were tremors for quite a while - around three hours," Kasbani, who like many Indonesians goes by one name, told on Wednesday. "The mountain continues to spew smoke, but there hasn't been any big eruption so far."

Mt. Agung lies some 75 kilometres (45 miles) from Bali's tourist areas, which attract millions of tourists every year. Flights have not been affected so far, but officials have estimated that concerns about an eruption over the past few months have cost the island at least $110 million in lost tourism and productivity as many locals moved to shelters.

Indonesia lies on the Pacific "Ring of Fire", where tectonic plates collide, causing frequent volcanic and seismic activities. In 2010, Mount Merapi on the island of Java - considered one of the most active and dangerous volcanoes in the world - erupted after rumbling since 2006, killing more than 300 people and forcing 280,000 to flee. Mount Sinabung on Sumatra island - which is currently at its highest alert level - has been active since 2013.

Why an eruption of Bali's Mount Agung is so dangerous

Mount Agung has shown its devastating power in the past. Now, it's simmering once more. Geophysicist Jacqueline Salzer tells DW about the different ways the volcano can kill. (27.09.2017)

More than 120,000 people have fled the region around Mount Agung on the Indonesian island of Bali. Vanuatu, also on the Pacific Ring of Fire, has evacuated one of its islands as the Manaro volcano threatens to erupt. (28.09.2017)

Indonesia's disaster agency says more than 75,000 people have fled the Mount Agung volcano on the tourist island of Bali because of fears of an eruption. (26.09.2017)