Thousands call for Britain's nuclear deterrent Trident to be scrapped

Opposition Labour party leader Jeremy Corbyn was among those marching against the renewal of the Trident nuclear weapons program. Critics say there is growing opposition to the Cold War-era submarine fleet. 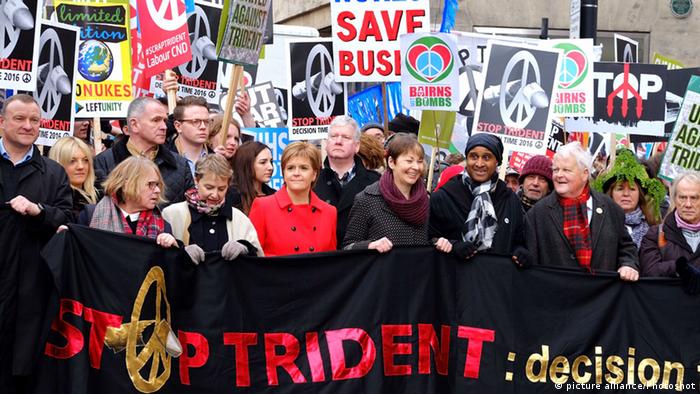 "If a nuclear war took place there would be mass destruction on both sides of the conflict. Everyone should think about the humanitarian effects on people across this globe if they're ever used," Corbyn told the estimated 10,000-strong crowd gathered in London's Trafalgar Square on Sunday.

Corbyn, who has been a member of the Campaign for Nuclear Disarmament (CND) since he was 16, said he had been elected Labour leader on a manifesto in which standing against the renewal of Trident was a key component.

Waving placards and banners, the protesters called on the government to cancel plans to replace the current generation of submarines that carry the nuclear warheads.

Organizers described the rally as the largest anti-nuclear demonstration in a generation, claiming that up to 60,000 people attended. Previously the largest protest was held in 1983, against the deployment of Cruise missiles at Greenham Common.

Scotland's First Minister Nicola Sturgeon, also addressed the crowd, saying that Trident, which is based at a naval base near Glasgow on the west coast of Scotland, was "immoral" and "impractical."

A decision is expected to be taken later this year on replacing the ageing submarines which carry the Trident missiles at an estimated cost of 39 billion euros ($43 billion).

The British government wants to replace the four existing vessels with four so-called Successor submarines, the first of which would enter service in the early 2030s.

But the opposition Labour party is deeply divided on the issue between leftwingers like Corbyn, who want to scrap it, and some centrists who want to keep it.

US Defense Secretary Ash Carter waded into the debate on Saturday, saying that Britain must renew Trident if it is to maintain its "outsized" role in world affairs.

Carter said the submarine fleet helped the "special relationship" Britain enjoyed with the United States, the BBC said on its website.

"It's important that the military power matches that standing and so we're very supportive of it," he added.

The UK's AWE entity is in charge of maintaining the country's nuclear warheads. For many years, it has been managed by a consortium dominated by the US arms company Lockheed Martin. This is about to change.

The US and UK will share nuclear-powered submarine technology with Australia as part of the new three-way defensive alliance. The move comes amid tense relations with China.