The UK government is to invest hundreds of millions of pounds at the site of the Trident nuclear submarine deterrent in Scotland. Scottish Nationalists have campaigned for Trident to be scrapped. 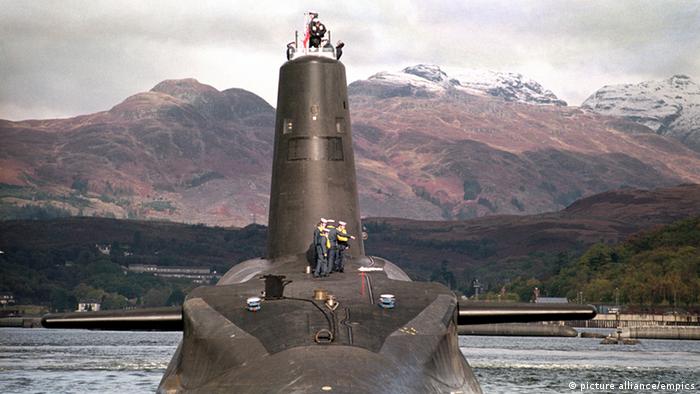 In a statement announced ahead of a visit to Scotland on Monday, UK finance minister George Osborne said more than 500 million pounds (688 million euros) are to be spent on "ship lifts, sea walls, jetties and other major projects" at the Faslane naval base on Scotland's west coast over the next ten years.

"Today's announcement of more than 500 million pounds demonstrates the UK government's commitment to investing in the infrastructure and capability to ensure that Faslane remains the centre of UK submarine operations for the next generation," Osborne said in a statement on Monday.

The Faslane naval base west of Glasgow on the River Clyde has four Vanguard-class submarines that make up Britain's 'Trident' nuclear deterrent. A decision on replacing the fleet is due to be made next year.

While the Conservative Party won a majority in the UK May elections, it only kept one seat in Scotland. The Scottish National Party (SNP) won 56 seats on a program which including the scrapping of Trident.

In reaction to Sunday's announcement, the SNP's Westminster defence spokesman Brendan O'Hara called for Faslane to be made into a "conventional base" rather than a nuclear hub.

"It seems the Treasury apparently has a limitless pot to keep an unwanted and obscene arsenal of nuclear weapons afloat," O'Hara said.

O'Hara said Osborne "should be defending the disabled, not his government's indefensible decision to spend 100 billion pounds on a new generation of nuclear weapons - and this so-called investment in Faslane will directly support the deployment of Trident submarines."

A British navy serviceman who released allegations of lax safety and security on the country's Trident nuclear missile submarines is in military police custody. William McNeilly published his concerns on the Internet. (19.05.2015)