Police in Pamplona have said up to 35,000 people took to the streets after five men were cleared of gang rape charges. An 18-year-old woman was attacked during the 2016 running of the bulls festival. 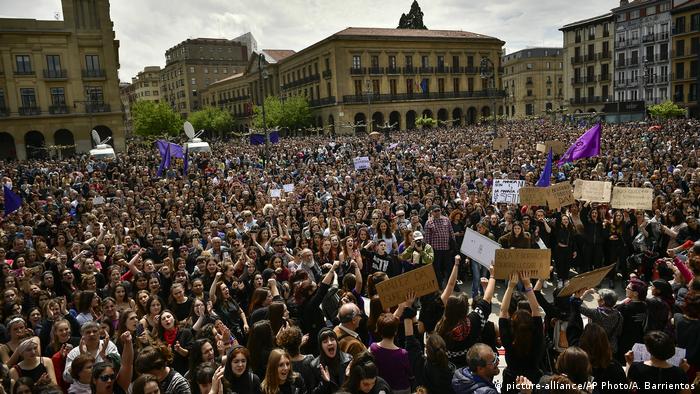 Protesters rallied through the streets of the northern Spanish city of Pamplona on Saturday following the acquittal of five men accused of gang raping an 18-year-old woman at the city's bull-running festival in 2016.

Police said as many as 35,000 people took part in Saturday's demonstration, the third day of protests against Thursday's court ruling, which caused a nationwide public outcry.

The five men, whose members named their WhatsApp group "La Manada" (The Pack) were convicted Thursday on a lesser felony of sexual abuse and sentenced to nine years each in prison.

The men, aged 27 to 29, from Seville, had been accused of raping the woman at the entrance to an apartment building in Pamplona during the city's famed San Fermin bull-running festival.

The court heard that the men filmed the attack on their smartphones.

Under Spain's criminal code, evidence of violence or intimidation must exist for the crime of rape to be proved, which is not always easy to prove.

The judges accepted that it was "indisputable that the plaintiff suddenly found herself in a narrow and hidden place, surrounded by five older, thick-bodied males who left her overwhelmed and unresponsive."

They then described how videos showed the plaintiff kept her eyes closed and wore an absent grimace, which the defense lawyers said was proof of consent. 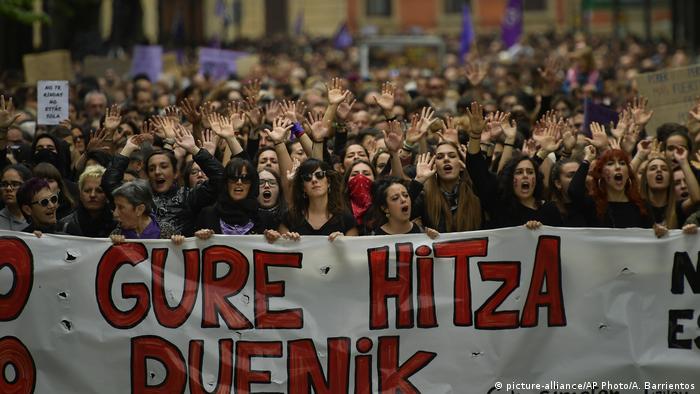 The prosecution said the victim, who was later found crying on a bench, was too terrified to move. Her lawyers say she will appeal the ruling.

Among the thousands of women who took part in Saturday's protest, many raised their hands while marching through the streets of the city, rallying under the slogan "It's not sexual abuse, it's rape."

The public anger over the ruling has led Spain's conservative government to say it will consider changing rape laws.

More than 1.2 million people had, by Saturday, signed a petition calling for the suspension of the judges who passed the sentence.

The court's decision has also prompted thousands of women to share their experiences of abuse on Twitter under the hashtag #cuentalo, Spanish for "tell it."

Saturday's protests follow similar street demonstrations in cities across Spain on Thursday following the sentencing, while thousands protested on Friday outside the Pamplona court where the ruling was made.