′They are aiding and abetting human rights violations′ | Europe| News and current affairs from around the continent | DW | 28.10.2016

'They are aiding and abetting human rights violations'

Kurdish municipal leaders have been detained in Turkey. Selahattin Demirtas, co-president of the Peoples' Democratic Party, spoke with DW about Erdogan's war against Kurdish factions and EU complicity. 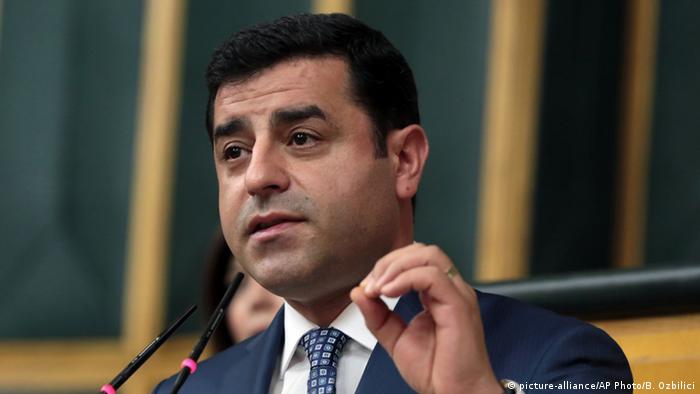 Gultan Kısanak and Fırat Anlı, the co-mayors of Diyarbakir, have been detained as part of Turkey's terror investigations - causing major outrage among their constituents. Tensions were already running high in the region after trustees were appointed in many municipalities, and now protests are being held in front of city hall in Diyarbakir. Peoples' Democratic Party (HDP) co-president Selahattin Demirtas has stated that dissidents will not yield municipalities won by the fair vote of the people and has called for continuing protests. Demirtas, who is also being investigated, stated that protesters would use their democratic rights to their very limits.

DW: You are being investigated for a speech you made in Diyarbakir. What do you think the result of the investigation will be?

You are being investigated for saying: "There will be no early elections in Diyarbakir - just resistance." What did you mean by resistance?

We have the right to gather to protest peacefully without using force or succumbing to provocations. I called for everyone to protest the government this way. This is a constitutional call for protest. What I mean by resistance is to not surrender to or accept silently the oppressive and unjust policies of the government.

How do you interpret the detentions of Gultan Kısanak and Fırat Anlı as part of the terror investigations?

This is just the government usurping, stealing or taking over the Diyarbakir municipality by force because it couldn't win it in the election. The charges brought against our mayors have nothing to do with terror or violence. We know our mayors and we trust them. They are people who work tirelessly for peace. I hope that they will be set free very soon. Besides, if it were a just trial, they never would have been taken into custody. The thing that disturbs us the most is the current grave state of the justice system in Turkey.

The investigations, launched after the failed coup against President Recep Tayyip Erdogan, have resulted in the shutdown of many media outlets, including those broadcasting in Kurdish and bringing news from the region. As an opposition party, can the HDP get its voice out there?

No. We haven't had access to the internet in three days from where I am right now. Diyarbakir and many Kurdish cities don't have internet access. They've shut the internet completely. All radio and TV stations are closed. The Kurds have almost no connection to the world: It's completely blocked. The government is imposing a complete blackout on Kurdish cities and the Kurdish people. Despite all this, we are trying to make our voice be heard with the little means that we have. Right now we are experiencing the biggest media embargo and censorship we have seen to date. 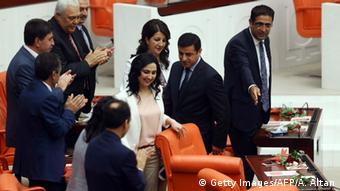 Are you losing your faith in politics?

We've known how difficult politics is from the start. We know the roads are closed and that politics is a thorny undertaking. We know the price will be hefty. But we knew that it wouldn't be an easy and rosy process. We're in politics to defeat these challenges. If we lose our faith in politics, the minute we are faced with hardships, we will have yielded to violence. Regardless of the hardships, we are still hopeful of democratic politics.

With all these developments, do you think it's possible to return to the negotiation process?

Erdogan is a president that is ready to throw Turkey into the fire to keep his power. I don't think he will change this attitude easily. However, if the AKP falls from power with an early election and Erdogan weakens politically and becomes desperate, there may be need for peace once again. But, in the short run, that doesn't seem to be a possibility. Erdogan doesn't seem to shy from pursuing insane policies that will cause a blood bath in Turkey as well as the Middle East. The blame for everything that has happened is on Erdogan. He is the one that has ended the solution process. He is the one that is making plans to increase his votes by war policies and marching to his target with nationalist policies. Everyone must continually pressure Erdogan to go back to the peacemaking table. We are waiting for the EU to criticize his war policies very harshly.

What are essential conditions for a return to negotiations?

In my experience, for the process to be successful, there must be the utmost transparency. The parliament must be involved, as well as a mediator or a third-party observer.

You travel to other European countries frequently to meet with EU officials. Did you get the support you were hoping for from Brussels?

The European Parliament is a little more sensitive on this subject, but unfortunately the rest of the European governments and institutions are supporters of Erdogan's fascist regime and are flocking after him because of fear and blackmail. I criticize them severely for this. European leaders who ignore the values of Europe are disappointing us very deeply. They shouldn't have stayed silent for us and the values of Europe. However, they surrendered to Erdogan's refugee leverage. By staying silent against these crimes, they are aiding and abetting human rights violations committed against Kurds and other factions in Turkey.

What were you expecting from the European Union?

Turkey is a candidate in negotiations for accession to the EU. It is also a member of the Council of Europe. The sanctions for situations like these are clear. Instead of placing political and legal sanctions, they are evading it all with criticism. The EU representative for security, Ms. (Federica) Mogherini, has been very vocal on this matter. (Enlargement Commissioner Johannes) Hahn is also very sensitive on the situation. The president of the European Parliament has made some statements as well. But, apart from these people, we're not hearing anything from institutions or anyone else who has the ability to carry out sanctions. The fact that the secretary general of the Council of Europe is pursuing policies in line with Erdogan is especially disappointing.