The UN's new North Korea rapporteur: 'We have to be realistic'

The new UN rapporteur on human rights in North Korea hopes the lessons he learned from other countries will improve the UN's cooperation with the communist regime. But he told DW that he knows it won't be easy. 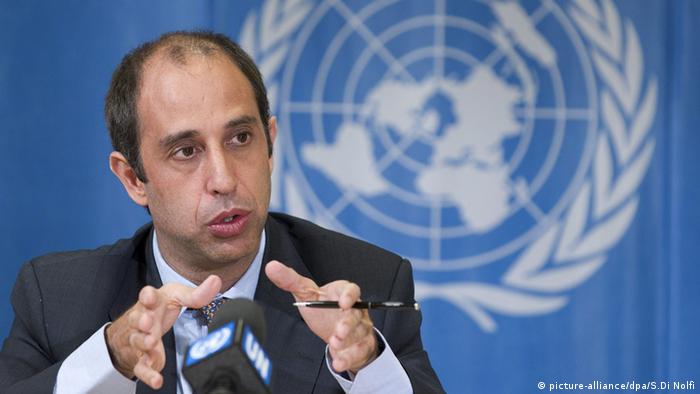 At the beginning of August, Tomas Ojea Quintana assumed the role of the United Nation's special rapporteur on the situation of human rights in the Democratic People's Republic of Korea (DPRK).

In an interview with DW, Quintana spoke about the obstacles preventing international cooperation with Pyongyang and the protection of human rights in North Korea, which remains by and large shut-off despite a number of different engagement strategies.

DW: Do you have any ideas about what you would like to achieve in your new role?

Tomas Ojea Quintana: My aspiration is to be part of a process where all persons, no matter who they are or where they live, increase their possibilities to live according to their beliefs, without discrimination and free from persecution and economic and social limitations.

This is an ideal, but it is where I believe we should head towards. Now, we have to be realistic, the situation in the DPRK, according to UN reports, is dire and extremely complex in terms of reaching solutions. It is therefore challenging to anticipate any achievement.

One issue that allows for cooperation with other organizations is the treatment and conditions of those behind bars and the prospects of progressive liberalization of those arbitrarily arrested on political grounds. Joint efforts may also help improve access to food and health as well as advance the situation of women and children. But this is only an overview of the situation.

Improving the government's accountability is now on the top of the UN agenda. I come from Argentina, a model country in trying its military for past crimes against humanity. And thus I understand very well the significance of seeking truth and justice to avoid repetition and to build a democratic society that respects human rights. The international community is confronting the DPRK's authorities with these values. This should be a course of action to follow.

Your predecessor, Marzuki Darusman, was not allowed into North Korea while he served as rapporteur. Why should things be any different once you take over?

'Sanctions against North Korea are not working'

Sanctions are falling short and hurting the wrong people, the UN Rapporteur for Human Rights in North Korea told DW. Nonetheless, Marzuki Darusman sees reason to believe that the pressure is starting to pay off. (24.05.2016)

Hundreds of North Korean workers are believed to be toiling in Poland under degrading conditions. An MEP calls on the European Commission to act, but the EC says it's a national matter. Others remain silent. (17.06.2016)

US, Japan, and 10 UN members call for probe into North Korea missile tests

The United States has imposed sanctions on North Korea's top officials, including its leader Kim Jong Un, for human rights abuses. It is the first time the US has held Kim directly responsible for extreme rights abuses. (06.07.2016)

It wasn't only Marzuki, but also his predecessor, Vitit Muntarbhorn, who couldn't visit the country - and don't forget that there are some UN agencies working inside the country, including UNDP, UNICEF, and WHO.

In my view, the question is not whether there is now any difference. The point is to be alert and ready for any available opportunity for dialogue and cooperation. What I would like to see, to start with, is that the authorities open themselves up more. I am blind neither to the results of different strategies that have been implemented for years, nor to the DPRK's stances and maneuvers.

I was the special rapporteur for Myanmar from 2008 to 2014. The country, which was ruled by a military junta for about 40 years until 2011, decided to cooperate with me and opened itself for me to visit, which I did, nine times.

There are some parallels between the situation in Myanmar and the one in North Korea, but of course there are also differences.

What will be your approach to getting North Korea to cooperate with the UN?

Formally speaking, I will approach the North Korean representative to the UN in Geneva, proposing cooperation and expressing my willingness to listen. This is also part of the UN mandate. I am coming from another region, and I haven't had any connection with North Korea in the past. We can guess their response, but nothing is predetermined.

On the other hand, the UN's efforts towards cooperation are collective in nature and encompass action from different stakeholders. China, as we well know, has a role to play in both its own interest and the UN's interest. But many others from other regions also have a responsibility.

The imposition and implementation of sanctions - as well as a reflection of their implications - must be carefully followed. Any negative impact on the living conditions of the population should be avoided.

Have you spoken with defectors from North Korea in preparing for your new post?

I did not talk to people from North or South Korea before the designation as a matter of objectivity. I have intensely submerged myself into the existing documentation, beginning with reports from former special rapporteurs and the and also with reports from civil society organizations and the DPRK government.

A note on this: I would like to recognize the fundamental support and role of the NGO community towards special rapporteurs and in pushing the UN agenda to improve the human rights of the people around the world. I see now their constant work in the DPRK.

The literature on human rights in DPRK is extensive, and the situation of its people that it describes is truly painful. Victims, so called "defectors," have been telling their stories everywhere, especially in the context of the UN inquiry. I will rely on those testimonies, while initiating my own consultation with the people. And if possible, I shall listen to the authorities.

The interview was conducted by Esther Felden and edited for clarity and conciseness.