'The Taliban will ban all art': An Afghan female filmmaker's plea

In an open letter, acclaimed director Sahraa Karimi has written of the brutal impact of the Taliban's takeover of Afghanistan on women, girls and artists. 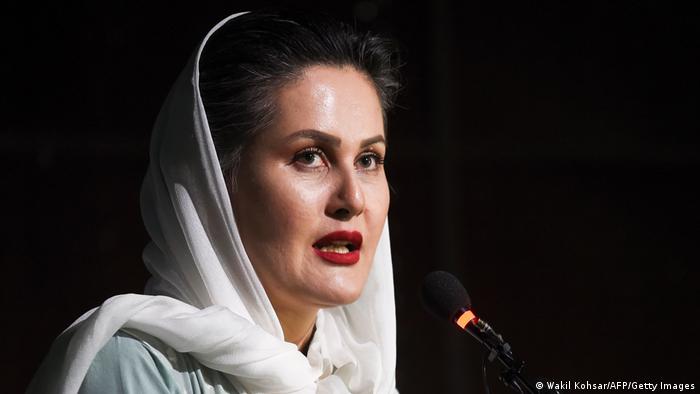 "If the Taliban take over they will ban all art. I and other filmmakers could be next on their hit list," Sahraa Karimi wrote in an open appeal that was sent to global media organizations on August 13 and circulated on social media as the Taliban took control of major cities in Afghanistan and encircled the country's capital, Kabul.

The filmmaker also documented the situation on social media, posting on Facebook and Instagram different videos showing her fleeing to the Kabul airport, joining crowds of other Afghans as they scramble to reach the capital's last remaining exit.

She has since managed to leave the country and told DW that she is now safe in Kyiv, Ukraine.

The director of the award-nominated film Hava, Maryam, Ayesha (2019) is the only Afghan woman to have a PhD in cinema. Karimi is also the president of the state-run Afghan Film Organization.

In her letter, Karimi wrote that the Taliban have "massacred our people" as they gained control over several provinces over the past weeks. Many children have been killed and girls sold as child brides to Taliban fighters, she writes; they murdered a woman for wearing the wrong clothes and gouged out the eyes of another.

"They tortured and murdered one of our beloved comedians," Karimi wrote, referring to the killing of Nazar Mohammad, popularly known as Khasha Zwan, who was killed by unidentified gunmen in Kandahar last month.

The Taliban have been targeting activists, journalists and cultural figures who have been critical of its activities.

The country's top media official, Dawa Khan Menapal, was also murdered by Taliban gunmen in early August. In a statement accepting responsibility for the killing, the Taliban said Menapal was "punished" for his deeds.

Karimi mentions both the incidents in her letter to emphasize the danger that cultural figures face in the country.

'Meanwhile, residents in various cities that have been taken over by the Taliban are fleeing to camps. "The families are in camps in Kabul after fleeing these provinces, and they are in unsanitary condition. There is looting in the camps and babies dying because they don't have milk," Karimi writes, adding that apart from the political crisis, the country is also on the brink of a humanitarian crisis and "yet, the world is silent."

In a recent report, the UN has stated that "Afghanistan is on course to witness its highest ever number of documented civilian casualties in a single year since records began." About 250,000 Afghans have been forced to flee their homes since the end of May, 80% of whom are children, according to the UN report.

The filmmaker also mentioned that the withdrawal of US troops from Afghanistan, initiated by Donald Trump and pursued under the administration of his successor, Joe Biden, is to be blamed for the situation in Afghanistan today. "We know that this decision to abandon our people is wrong, that this hasty troop withdrawal is a betrayal of our people and all that we did when Afghans won the Cold War for the west," Karimi wrote, adding that the Afghan people were "forgotten" during the militant group's "dark rule" that began in 1996.

Girls forced out of school again

"When the Taliban were in power, zero girls were in school. Since then there are over 9 million Afghan girls in school. This is incredible. ... Herat, the third-largest city which just fell to the Taliban had nearly 50% women in its university. These are incredible gains that the world hardly knows about. Just in these few weeks, the Taliban have destroyed many schools and 2 million girls are forced now out of school again," Karimi wrote.

During the first emirate that the Taliban established, in 1996, they executed a strict interpretation of Islamic law and established a moral police that forced men to grow beards and women to wear full-body burqas. Women who went unaccompanied to public places were beaten and schools for girls were shuttered. Music was also banned, aside of religious chants.

"This war is not a civil war, this is an imposed war, and it is the result of the US deal with the Taliban," she said, referring to the peace agreement that was brokered between the US, represented by special envoy Zalmay Khalilzad, and the Taliban's chief negotiator, Mullah Abdul Ghani Baradar, in February 2020.

'Taliban 2.0 is exactly the same as the earlier version'

At the time, the US government, under Trump, said the country would withdraw all its troops within the next 14 months. Since then, unrest in the country has been growing, culminating in the present occupation of the country by Taliban militants.

In her letter, Karimi appeals to the world to "not turn its back on us. We need your support and your voice on behalf of Afghan women, children, artists, and filmmakers."