East Germany's secret police had a secret university faculty where agents could graduate. Their qualifications are recognized in Germany now. But the man overseeing the old Stasi vaults wants them renamed for all to see. 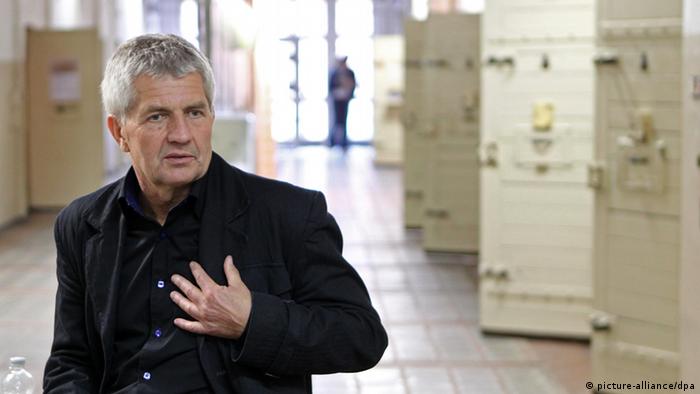 The German official in charge of overseeing and facilitating public access to the old East German secret police archives, Roland Jahn (pictured above), has called for the in-house university graduates of the "Stasi" to no longer be permitted to use the academic title "Dr." like other PhD graduates.

One of the terms of reunification between East and West Germany was equal recognition for academic qualifications on either side of the Berlin Wall, something that even applies to those who graduated at the secret Ministry of State Security (MfS) facility outwardly disguised as the Potsdam Law School.

"Doctor of the Stasi — that would be true transparency," Jahn said in an interview with German news agency dpa, using the MfS's widely-used nickname Stasi.

The former East German opposition figure, in his current role since 2011, said that Stasi "graduates" even wrote theses documenting interrogation techniques and ways of breaking down dissidents.

"These were instructions on how to abuse human rights," said Jahn.

Its postgraduate students — put through courses in Marxism-Leninism, sport, militarism and "political-operative special skills" in preparation for senior jobs — often authored theses in groups, according to Jahn's findings.

Archive researchers had identified 174 doctoral theses, albeit attributed to 485 authors. In one case, a single PhD thesis was nominally authored by 10 different students — contrary to standard academic practice. Such details were kept secret even within the Stasi prior to communism's collapse in 1989.

Those who became MfS alumna used the title "Diploma in Law" (Diplom-Jurist), as a trained lawyer would, said Jahn. He added that his intention was not to brand or stigmatize individuals forever as ex-Stasi, but rather to show how they had dealt with their personal pasts.

Unlike in much of the world, it is common for German PhD graduates to insist on their "Dr." titles, whether or not they trained in medicine.

The Berlin-based archive, presenting doctorate samples on-line, said the students explored issues ranging from the motives of East Germans who sought to flee the former GDR to Stasi liaisons with border troops and the GDR's uniformed police, the Volkspolizei. The archive says in its introduction that the "authors unmistakably stress the clear aim" throughout their nominally academic research of "safeguarding of the political interests of the [ruling party in the GDR, the SED.]"

Border soldiers killed, mostly while themselves trying to flee the former GDR (German Democratic Republic), were declared to have been martyrs "in an especially cynical way," said the agency's researchers.

Pensions and the past

The broader issue of the Stasi past remains a live political one in Germany, 20 years after the Berlin Wall fell.

Last month, Germany's parliament improved pension bonuses for people who fell victim to the former East German regime, also reducing to 90 days the minimum period one must have spent in custody in the GDR in order to qualify.

Routine checks on persons with high-ranking public service posts in the former East, to establish whether they were once official or unofficial Stasi employees, were also extended until at least 2030.

Since 1992 more than 1.5 million individuals 'have gained access to their files.'