German low-cost supermarket Lidl has profited from the difficulties of some of Spain's biggest retailers. It is now the largest German supermarket in Spain and the second-fastest-growing firm in the sector. 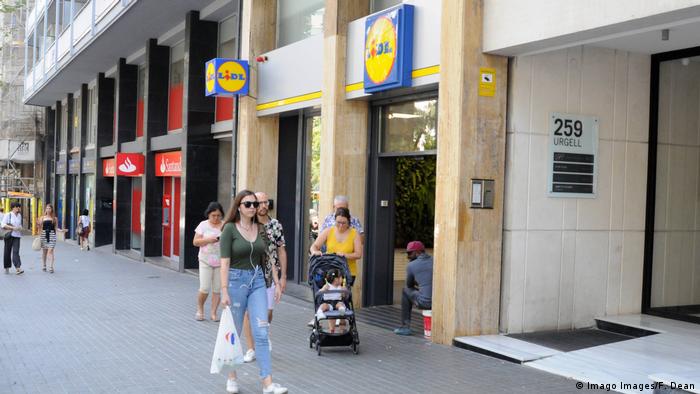 A cheap German supermarket — that was the idea. It was 1994 and Lidl had just landed in Spain, bringing a low-cost paradigm that had worked in colder lands.

Twenty-five years later, the German brand is already the Spanish supermarket sector's second-largest chain in terms of customers, only outranked by the uncontested leader Mercadona, according to the consultancy firm Kantar.

But, while most of its rivals are going through a bumpy spell, Lidl keeps growing year after year, mostly recently by 0.7%. It has already reached a 5.6% market share. Only Mercadona performed better in the second quarter of 2019, with a 1.2% annual rise.

"We can talk about Lidl's success as a case of transformation," Alfonso Sebastian, deputy chairman of the Spanish Retail Association, tells DW. "If one takes a look at one of its supermarkets in Spain, it has nothing to do with those in Germany."

The Spanish supermarket sector has a clear, apparently unbeatable frontrunner: the aforementioned Mercadona, which has a 26.1 market share.

But it also has many other regional players that sometimes beat the market leader in their own territories, even though they often have no presence just a few kilometers away. Examples include Gadisa and Froiz in Galicia, Eroski and Uvesco in the Basque Country, Convis and Bon Preu in Catalonia, Ahorramas in Madrid and MAS in Seville.

So, how did Lidl adapt to this Iberian ecosystem?

"I like its veggie options," says Laura G. a 26-year-old Andalusian living in Madrid. "It has a huge variety of vegetarian and vegan products, and they're not expensive at all." Ernesto A., 24, says he shops in Lidl simply because he likes a particular brand of salmorejo,a cold soup from southern Spain, which he cannot find in other supermarkets.

"Lidl understood it had to offer Spanish consumers a wider variety of products. It didn't give up on its low-cost essence, but it broadened its offer," Juan Carlos Matarrubia, managing partner of the specialized consultancy firm Retail Data, told DW.

Its popular in-house bakery was a good starting point, but the company went further. Matarrubia lists some things Lidl did to adapt to the Spanish market and to its potential clients. In order to have a wider selection of products, it opened its shelves to leading brands, bringing in high-quality products.

Letting the light in

It also reshaped its fresh goods selection by bringing in more variety, which he thinks made it more attractive. Sometimes it made pioneering moves in the sector, Matarrubia explains. "It was a trendsetter in the introduction of cage-free eggs and in its use of plastics."

Plus, he underlines, it completely changed many of its stores, "sometimes even demolishing the old ones, and bringing more sunlight and new furniture." 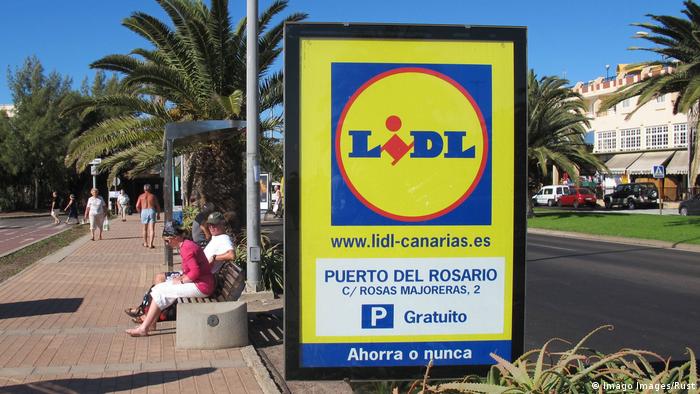 Lidl's Spanish adventure is continuing, but the retailer is well-advised to watch the moves of its rivals in the country

But jumping from the perception of a low-cost supermarket to something more attractive to the public also meant investing a lot in improving its image. Lidl has become the main company of the sector in terms of advertising expenditure. In 2018, it invested €17.3 million ($19.37 million) in advertising, while Carrefour spent €13.3 million and DIA €8.6 million, according to a study by Infoadex, a Spanish advertising consultancy.

It looks like it has worked out. "Years ago, Spaniard were ashamed to say they did the groceries at Lidl. But the company turned this upside down," says Matarrubia.

According to the firm Retail Data, Lidl sales grew 48% from 2014-2018, yet its commercial floor space only increased by 15% in the same period, while the number of Lidl stores only rose by 6.4%.

Its nationwide total of 656 stores is low compared with its rivals. Mercadona has 1,628 stores, DIA has 3,195, Carrefour has 1,103 and Eroski has 1317. "This means that its supermarkets are more and more productive," Matarrubia says.

Not all plain sailing

Yet this doesn't mean that everybody loves Lidl. "I don't like it," Irene C., a 25-year-old in Madrid, tells DW. "In my opinion, their products are not that good. And it's often quite unorganized, at least in the supermarkets I've been to. I'd rather go to Carrefour or Mercadona."

As well as making some smart moves, Sebastian explains that the current economic context also helped create the conditions for Lidl's Spanish boom. "The company has also been lucky," he says. "Many of its competitors, such as Eroski or DIA, are facing financial hardships."

The Spanish business newspaper Cinco Dias recently reported how DIA, which has had to close 219 of its stores, is trying to apply a "Lidl formula" to change the present course, meaning a focus on proximity and efficiency. For that, it has hired former Lidl Chief Executive Karl-Heinz Holland as its new CEO.

And what about Aldi, Lidl's long-term rival? "They're also doing pretty well," Matarrubia says. The company came to Spain eight years after Lidl, in 2002, but he believes they are on the same path of success.

Lidl's Spanish adventure is not guaranteed to be all plain sailing though. "It is gaining ground in fresh products at the expense of traditional grocery stores, but there are not many clear growth opportunities in the sector," Matarrubia cautions.

He believes that ecological products or prepared meals will be decisive, as well as the possibility to eat inside the store itself.

For his part, Sebastian also has a warning for Lidl. "They should keep an eye on their rivals," he says. "And be ready for the counteroffensive."

Can Russian discounter Mere beat Aldi and Lidl at their own game?

Russian discount grocer Mere wants to conquer Germany with its low prices. The new supermarket is selling half a kilo of coffee for less than €2, almost half the price of Aldi and Lidl, but not everyone is convinced. (20.03.2019)