The quiet genius of Mesut Özil

A talent already worth around 53 million euros - the fee Arsenal paid Real Madrid last September - Özil has been the latest bone of contention around the German team. On Sunday, though, he could be a world champion. 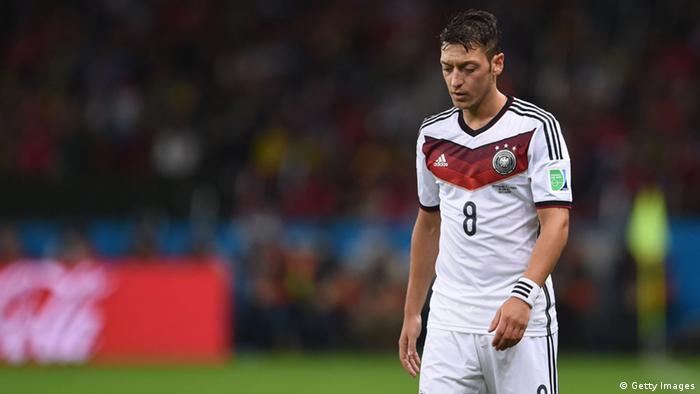 Despite Germany’s efficient and, at times, fabulous success in Brazil, Mesut Özil has been copping a fair bit of criticism these last few weeks. The critics say that the 25-year-old is often barely involved in the match, nor does he show the desire or battling attitude he should. Bayern Munich legend Paul Breitner even went as far as to say that he "does nothing but walk around on the pitch."

When Germany's wobbly win against Algeria came to an end, Özil was the player on the receiving end of the most criticism. While his performance was miles away from his best, everyone in the German side struggled.

In the two games since, against France and Brazil, Özil has turned the momentum to his side however, performing particularly well in the last match in Belo Horizonte.

"I don't think the criticism is justified. He got better and better with each game," former Liverpool midfielder and German international Dietmar Hamann told DW. 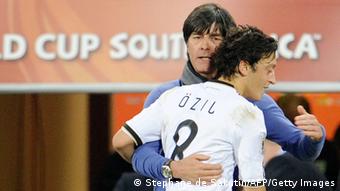 Germany boss Joachim Löw is a fan of Arsenal's Özil

And, his nonchalant skills with the ball gives him an appeal to many observers. Brazilian legend Ronaldinho is a fan of Özil and his Samba football characteristics. "Germany has many great technical players. For example, Mesut Özil," he told German newspaper Bild.

"He plays like a Brazilian. You Germans no longer make your players mechanically, not squeezed it into a concept, but let them play football. "

Özil is currently undergoing a bit of a change of role in the German team. Joachim Löw has moved him from a central role to playing in an inside-right or left position. It makes him an essential component for the functionality of the German team.

In this tournament, he has completed the highest number of passes in the attacking-third of the pitch for Germany. It's this security in possession, that Hamann also notes, which allows Germany to make such a rapid transition between defense and attack.

Germany's style evolves around transitions. Spain, Italy, the Netherlands and Brazil haven't been able to hone the skill, which has become so crucial to the modern style of football.

While Özil may lack the consistency to be a traditional playmaker and control the tempo of matches, he also shows that occasional flash of brilliance, which is key to winning tight matches. You only need to look at the influence of Lionel Messi's intuitive bursts of individual magic that have steered Argentina towards the final of the World Cup.

Germany boss Joachim Löw is a fan of Arsenal's Özil

He also has a knack of creeping into increasingly dangerous positions between the defensive and midfield lines of the opposition. Blink for a second and he'll have switched to the blindside of the defender. At his best, Özil can maneuver and weave around any compact defensive block. His fluid style of play is aided by being technically astute enough to hold the ball and link possession around the edge of the box, the most crucial area of the pitch.

Whether it’s the deftest of touches to bring another player into the game, or just a strategic run into space to open up room for others, he is imperative to the balance of the team, according to Hamann, himself with 59 caps in Germany's midfield.

"With him in the team, there's always a better fluidity and flow to the game; a better rhythm to the game because he's safe in possession," he added. "He may not create as many chances as he would like, but it's a team game and the team functions well at the moment. It's all about the balance."

The question of whether Özil has been disappointing at the World Cup was even put to Germany's assistant head coach Hans-Dieter Flick at an official press conference. "We see that differently than you do," was his clear and short answer. 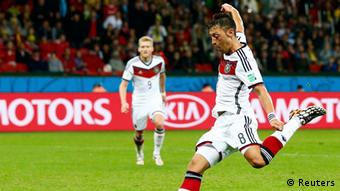 Özil scored his only goal of the tournament against Algeria

It’s clear that the management is convinced of Özil. Germany's emphatic destruction of the Brazilian national side has swung the pendulum in the DFB-team's favor, and the critics are quietening down.

What’s more, as Hamann succinctly puts it, the fans shouldn’t be worrying. "You don't play for Real Madrid and Germany and get so many international caps, if you are not strong mentally."

Pierre Littbarski was part of three World Cup campaigns during his prestigious playing career. He talks to DW about how Germany will be preparing for the biggest match in world football, and their chances in the final. (10.07.2014)

Germany demolished five-time champions Brazil 7-1 in one of the most absurd World Cup matches ever. The Germans finished the game off in a surreal 20-minute period in the first half. (08.07.2014)

Opinion: Now or never! - The Schweini generation has to finish it off

Let's forget the fact that Germany doesn't have a good record against Brazil, it's time for an upset. It has to happen now, according to DW's Volker Wagener, because the 'Schweinsteiger Generation' hasn't proven itself. (08.07.2014)