The oil disaster the world prefers to ignore | World | Breaking news and perspectives from around the globe | DW | 27.06.2010

While the world fixes its gaze on the plight of those affected by the Gulf of Mexico oil spill, there are millions of people at the far side of the Atlantic suffering the same fate. But their stories are rarely heard. 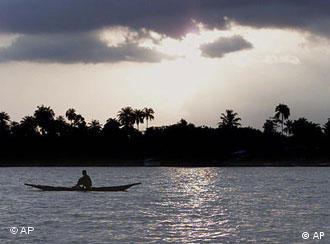 The Niger Delta has become a paradise lost

The tale of the Niger Delta is one of two halves. Farmed and fished and otherwise left to nature's devices, the 70,000-square kilometer (27,000 square miles) area of wetland boasts one of the highest concentrations of biodiversity in the world. With its intricate network of creeks, rivers, estuaries, mangrove and fresh swamps and abundance of tree and fish species, the ecology of the delta reads like a dream.

But living in it has become a nightmare. Where once it was possible for hungry locals to leave the cooking pot warming while they went outside to catch something to put in it, their waters have now become so contaminated that the fishing industry has all but ceased to be. And the reason is crude. Quite literally.

Oil was discovered in the Niger Delta in the mid 1950's and believing it would bring lasting prosperity to the area, the local population celebrated the find. When the first of the black gold was extracted from deep beneath their feet, it smelled of promise and of a plentiful future.

The pitter patter of acid rain

When the region first began to witness signs of environmental change such as an increase in gas levels, the local population attributed it to witchcraft and wizardry. It was only when people's roofs started to turn brown with just months of being put up that the first questions surfaced. As Prince Chima Williams, head of legal resources with the Environmental Rights Action group in the Niger Delta told Deutsche Welle, something was not right.

"Researchers began to find out that the brownish tone on the roofs was caused by acid rain and people came to realize the dangers inherent in this." 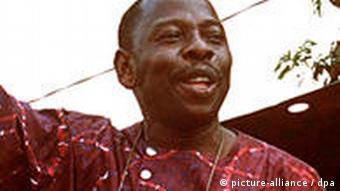 Ken Saro-Wiwa died for his cause

The horrific extent of those dangers was brought to light by the non-violent campaign of writer and environmental activist Ken Saro-Wiwa, who rallied against Shell's degradation of the Niger Delta's Ogoniland region until his controversial judicial execution in 1995.

Although Shell pulled out of Ogoniland in 1993, it and several other major oil companies including ExxonMobil and Chevron are still very much at large across the delta. They are collectively responsible for some 10,000 kilometers of pipeline, much of which is aged and rusty and extremely prone to leak. The number of spills increases by the year - some say to as many as one per day - but the number of clean-ups does not keep pace.

In the past, Shell, the largest of the petroleum corporations with a presence in the region, has gone on record saying that the majority of spills are a result of sabotage. Although there are certainly incidences of illegal siphoning, that is by no means the whole picture.

Nigerian government estimates say there are more than 2,400 spills in the region currently waiting to be cleaned up - some of them having occurred as long as 20 years ago. But those figures are considered modest by experts and campaigners such as Ben Amunwa of London-based Platform's 'Remember Saro-Wiwa' project. He says a lack of independent regulation makes it impossible to know the true extent of damage across the massive delta. 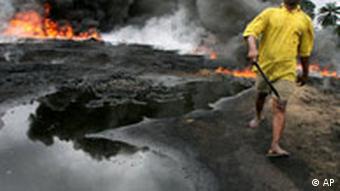 This pipeline fire burned for 45 days and nights.

"Because the region is so full of water, when spills do occur they impact much deeper than just the immediate site," Amunwa said. "A single spill can affect up to 42 communities, contaminating the water they depend on for drinking, cooking and other every-day purposes."

Oil spill handling in the Niger Delta, when it happens at all, is often haphazard and inadequate. Amunwa talks of local laborers being hired to dig six foot pits that are then filled with the contaminated soil and set on fire. The process not only emits further toxins into the environment but often leads to the uncontrollable burning down of crops and economical trees.

And that, says Amunwa, is not all. If they so wish, multinationals can use a get-out clause not to have to tend to their spill at all. "Right now an oil company can simply pay the Nigerian government $7,000 (5,700 euros) to not clean up. Can you imagine that in the US? It's simply not possible." 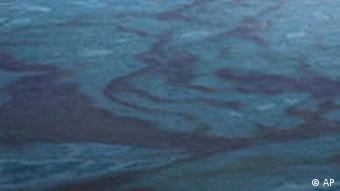 In the West African nation, however it is, and far from the proceeds of such impossible dealings being invested back into the Niger Delta, the estimated 30 million-strong population is being left to foot the bill with their livelihoods and their lives.

"The average lifespan in the Niger Delta is 40," Williams said. "So you see people are living and counting the days."

Those days, he said, are filled with anguish and despair. No longer able to survive on the fruits of the earth and the bounty of the ocean, local communities have become dependent upon fish imported from other parts of Nigeria or abroad. And pollution has also rendered recognized farming untenable. In some communities people grow what they can just to keep their families from starving, while in others the pollution has become so bad that residents have been forced to move, often into urban slums.

By stark contrast Shell workers in the Niger Delta capital, Port Harcourt, live in a gated residential area which offers its inhabitants schooling, medical treatment, shopping, sporting facilities, a choir, a library, cookery classes and even a book club.

"In our normal community there is no light, no water, no hospital, no good roads, it is a gloomy community," Williams said. "But across the fence you see Shell where there is light almost 24 hours a day, an uninterrupted water supply, fine buildings and green vegetation." 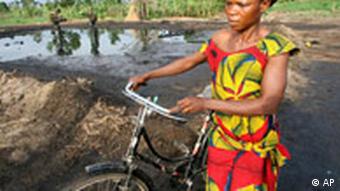 Outside the Shell residential area compound

As for the vegetation outside the oil compound, widespread negligence has turned much of it black. So went wrong?

"It's a text book example of the resource curse where you have a country that is almost wholly dependent on oil revenues," Amunwa said. "There is a strong interest in the government keeping the oil companies happy and ensuring that they can cut corners when it comes to the environment or public safety."

And there is no reason to believe that corporations are going to change their behavior of their own volition. A group of experts recently estimated that it would cost some $20 billion to remediate the Niger Delta from the impact of known oil spills. Rather more than a few thousand dollars to ignore them.

What activists and the huge local population want to see are regulations that outlaw the kind of bad business ethics that have coated the delta's mangrove swamps with crude. Ben Amunwa said he calls on the new Nigerian president, Niger Deltan Goodluck Jonathan, to overhaul the regulatory system and pass tougher laws preventing oil companies from being allowed to pay to pollute.

Prince Chima Williams agrees that the country's new leader has a golden opportunity to bring about change, but he does not put much faith in Jonathan to do the decent thing. 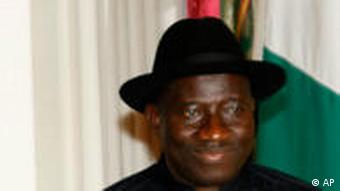 "This is a president who knows that Shell is the biggest polluter of the Nigerian environment, yet he appointed a former director of Shell as his minister of petroleum," Williams said. "That speaks for itself."

The general consensus among Niger Delta campaigners is that it will take a concerted international civilian, political and judicial effort to make the oil giants accountable for their mess.

"Responsibility needs to be imposed on the companies in London, the Hague, Houston, whereever they have their headquarters because they are escaping justice in Nigeria," Amunwa said.

Williams wants much the same thing. He calls on the international community and the European parliament in particular to sign treaties and declarations enforcing international standards of respectful corporate governance.

"If they can make binding regulations compelling corporations of European and American origin to behave the same way they do in Europe irrespective of the strength or weakness of government or how corrupt those governments are, we would see a difference," Williams concluded.

In an interview with Deutsche Welle, the former director of the UN's environment program expresses his astonishment that the oil leak can't be stopped and demands consequences both at BP and beyond. (16.06.2010)

In combating the Gulf of Mexcio oil spill, BP has resorted to controversial methods of distancing itself from negative publicity. Critics fear full compensation for environmental and economic damage is unlikely. (15.06.2010)

Exploitation of oil reserves puts Uganda at a crossroads

The discovery of petroleum resources has been more of a bane than a boon to many African nations in the past. But will things be any different in Uganda, which is set to become the continent's newest oil producer? (14.04.2010)

Site about the life, plight and death of Ken Saro-Wiwa