The Nile Project: Resolving conflict into harmony | Environment | All topics from climate change to conservation | DW | 08.07.2016

The Nile flows through 11 African nations and serves as key source of freshwater - but sharing this resource is politically tricky. A unique project works to resolve conflicts and promote sustainable use - through music. 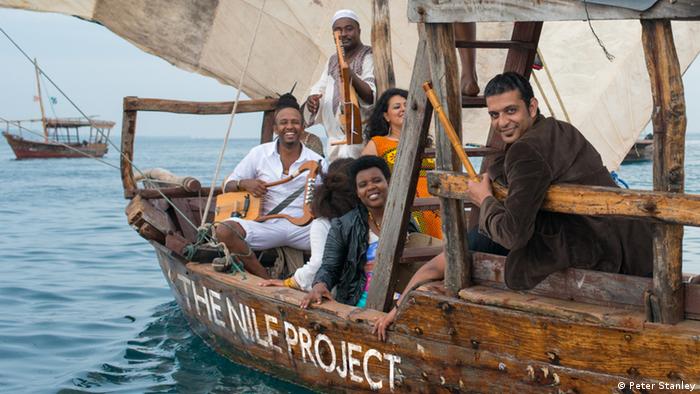 Egyptian-American ethnomusicologist Minai Girgis believes music helps connect people across nations - and this is exactly what the Nile Basin needs, he thinks. Girgis points out that the world's largest river flows through 11 very diverse African countries. And dependency on this as their main source of freshwater has often led to conflicts.

Girgis wants to help solve that - with the help of music. Five years ago, he co-founded an initiative called The Nile Project to bring musicians from all 11 Nile countries together. The purpose? To connect across the region and rise above the conflict, promoting sustainable use of the river.

"We wanted to use music that combines many of their musical traditions to open up a conversation about Nile challenges, and our roles as citizens and civil society in addressing some of these challenges," Girgis told DW.

About 437 million people live along the Nile river. The Nile Basin is a "complex ecosystem" - not just environmentally, but also politically, says the musical director of the Nile Project, Ethiopian-American saxophonist Danny Mekonnen.

The conflict has been going on since the early 20th century, when a treaty was signed that gave the lion's share of the Nile waters to Egypt. Now there's a dam being built in Ethiopia, which is quite controversial, Mekonnen said. "It's a huge region with around 400 million people. So there's not enough to go around, and it's not equally distributed." 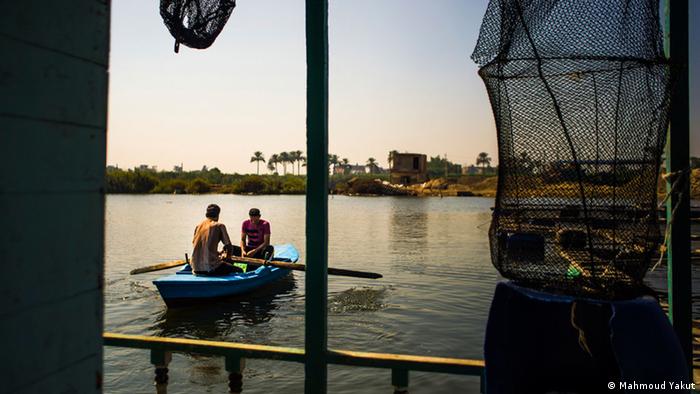 Changing people's perception of the Nile

The Nile runs through countries as diverse as Uganda, Sudan, Egypt and Ethiopia, and is important to varying degrees in all these different countries. In Egypt for instance, people tend to take the river for granted, says Girgis.

"Like any other Egyptian citizen who's grown up by the river, we cross it every day - but we don't think about it until it's questioned," Girgis said. Like many others, he didn't know much about where the Nile comes from - its geography, its environmental challenges - until he started investigating these issues.

The same goes for Kasiva Mutua from Kenya, who plays percussion with the Nile Project. Back home, she's one of Kenya's top drummers - and one of the few women to be successful in this field.

"Kenyans in general don't really see themselves as part of the Nile," she told DW. "I never really realized that Lake Victoria acted as such a major part of the river. It was only when I joined the project that my view about the Nile completely changed," Mutua said.

Encouraging people to appreciate the river as a shared resource in need of protection is one of the key aims of the project, according to Mekonnen. "What we are trying to do is create a kind of citizenry, whereby the people who live in these 11 countries feel connected. And one of the ways we can act is through our musical collaboration." 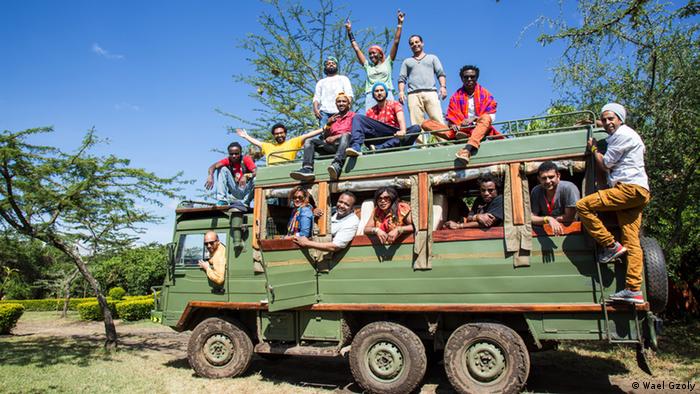 The members of the Nile project want to encourage creative, trans-boundary collaboration across the Nile Basin

East Africa is one of the areas of the world already experiencing the impacts of climate change. Kasiva Mutua is concerned about the future of the continent if international action does not succeed in halting the warming of the planet.

"I've seen a lot of impact of climate change. Everybody can feel the heat. The seasons have changed," she said.

When she was a child, it used to be really chilly in June and July in Nairobi - but that's no longer the case. "As I left home, the sun was shining. That's a bit strange and it shows there is something wrong," Mutua said.

Nile Project co-founder Girgis agrees. He says climate change is exacerbating the problems already being experienced in a region where conflict over water supplies has become a fact of life.

"Sea level rise in the Nile delta in Egypt is a clearly seen effect of climate change," he said.

"Some of the impacts on the Nile Basin are still in uncertainty mode," Girgis continued, explaining that it still isn't known whether climate change will bring more or less water.

"The quantity of water these countries are looking to share in a fair manner is a big question when it comes to climate change," Girgis concluded. 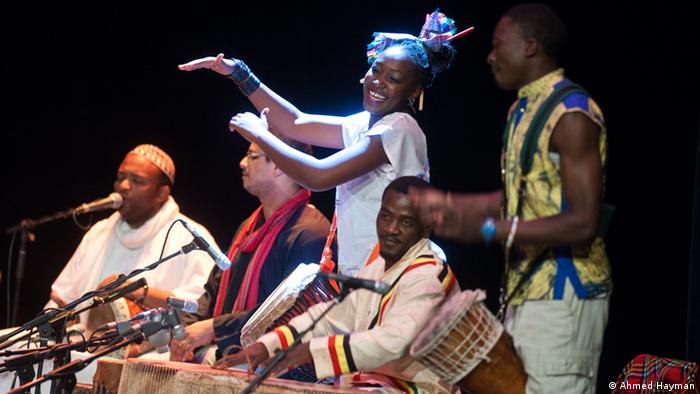 Kasiva Mutua, middle, is among the few prominent female percussionists in Kenya

'People have to do something'

Girgis is convinced that governments alone cannot solve the problem. He says what's needed is solid infrastructure - not just of governments and track-one actors, but among all different levels of stakeholders.

Citizens, private sector and civil society all have a very profound role in supporting this capacity, Girgis said. "And with the Nile Project, we're trying to allow these different actors to see how they fit into this bigger puzzle."

Mutua agrees, and points out the power of taking action. "It all starts with talking - and this is basically what we do. We perform music and strike that curiosity in people, to start talking about sustainable solutions and start realizing what is really happening."

And that's the Nile Project's contribution, she says. "In one way or another, people should try and do something," Mutua believes.

And to do something for the Nile, the region itself has to work together - like the musicians of the Nile Project are. "What we need is creative collaboration, trans-boundary, across the Nile Basin," according to Girgis.

"So our music is, in a way, a metaphor for that creative problem solving," he added.

Bringing musicians from different countries together also involves different instruments, different tuning systems, different scales and rhythms and languages. The Nile Project seeks to combine all of this in one Nile sound that's representative of the whole watershed. 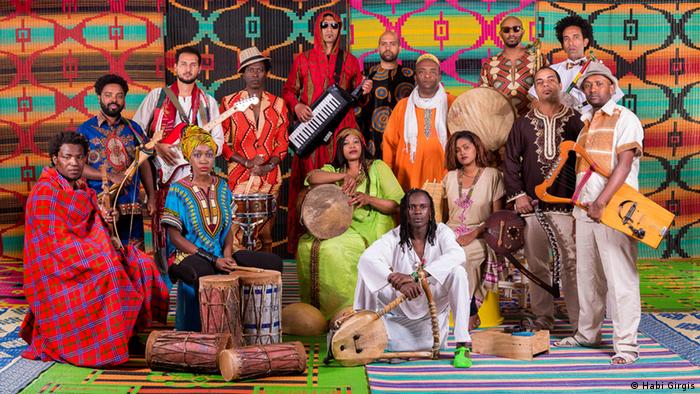 "It's a blueprint for the way citizens from all these different countries can organize themselves to come up with something none of us could come up with on their own," Girgis concluded.

A forestry project in Egypt is using sewage effluent to nurture tree plantations in the desert, preventing desertification. The method has been so effective that it's attracted the interest of German forestry companies. (17.06.2016)

Water scarcity has long been a problem. But climate change, a growing global population and economic growth are putting the natural resource under even more stress. (09.06.2016)

Pakistan is facing an acute water shortage and may run dry by 2025, according to a latest study. Experts say the water scarcity is also stoking violent conflicts in the country, which is already battling insurgency. (30.05.2016)

Ecotourism or hydroelectricity in Uganda?

The Ugandan government wants hydroelectric dams to generate much-needed electricity. But the planned Isimba Dam would flood ecosystems, threatening tourism. Is it a question of ecotourism versus energy? (05.05.2015)