'The Naked King': Retracing revolutions in Iran and Poland 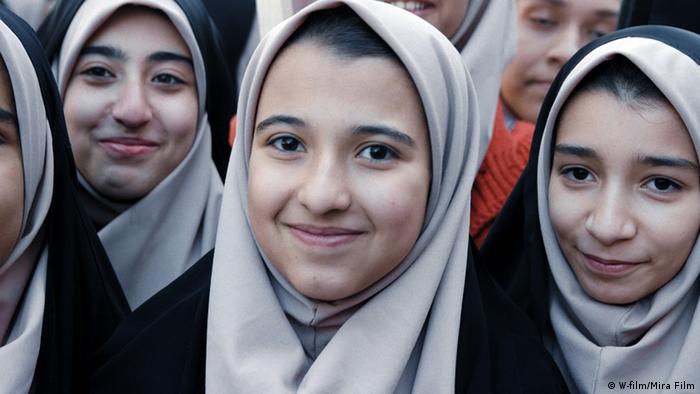 "Revolt is an adventure of the heart," legendary Polish reporter Ryszard Kapuscinski once said during a television interview. The conversation took place in his study at home, amidst books and piles of materials. The clip is just one of many that film director Andreas Hoessli has included in his political documentary The Naked King: 18 Fragments on Revolution.

The director chose to assemble a variety of images from interviews, both historical and contemporary, and archival footage. The result is a panorama of the uprisings in Poland and Iran some 40 years ago.

"The film explores the transformation of man in the revolution, confronts secret service agents and shows the attempt to capture a new attitude towards life in memory," its website states. The film celebrated its online cinema premiere in Germany on Wednesday. 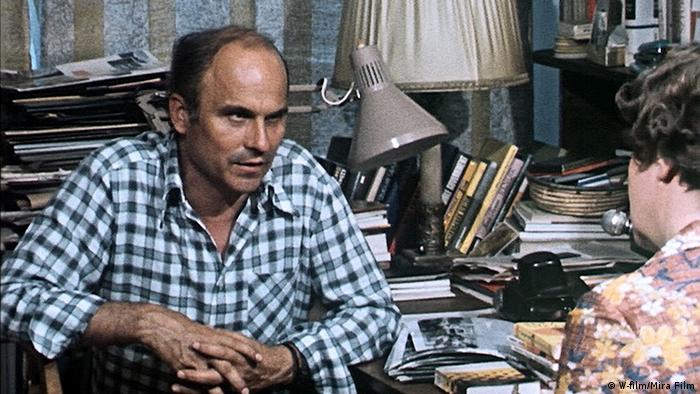 The movie tells the story of Kapuscinski, who traveled to Tehran in 1978 to cover the Iranian revolution as a reporter. Those events and their aftermath would keep him extremely busy — that is, until the uprising of shipyard workers in 1980 in his home country of Poland.

Director Hoessli regularly interweaves the revolutionary events in both countries. Interspersed are excerpts from Kapuscinski's literary reportages, which bridge the sections.

Under surveillance in Poland

Hoessli knew Kapuscinski personally. From 1978 to 1980, the Swiss director lived in Warsaw as a research fellow and traveled around the country a great deal.

"[Kapuscinski] was a kind of mentor to me, in all matters," the filmmaker told DW. The mass strikes in Poland, the revolutionary upheaval, the euphoria, the struggle of the trade union movement Solidarity (Solidarnosc) for democracy — Hoessli experienced it all it firsthand.

As a foreigner, he quickly became a target of the secret services. He did not discover that he was being watched at the time until he located and investigated his file under the code name "Figurate Hassan" in Polish archives. In The Naked King, he interweaves his own biographical search for clues with quotes from Kapuscinski's literary reportages.

The years of the Iranian Revolution

Hoessli traveled to Iran a total of four times for his film. He places unusual interlocutors in front of the camera: journalist Paris Rafie, who describes the sense of fear and oppression; writer Amir Hassan Cheheltan, who had to flee to Italy to escape assassination attempts by the secret service; and the young filmmaker Negar Tahsili, who traces the Iranian Revolution of 1978 in photo archives. 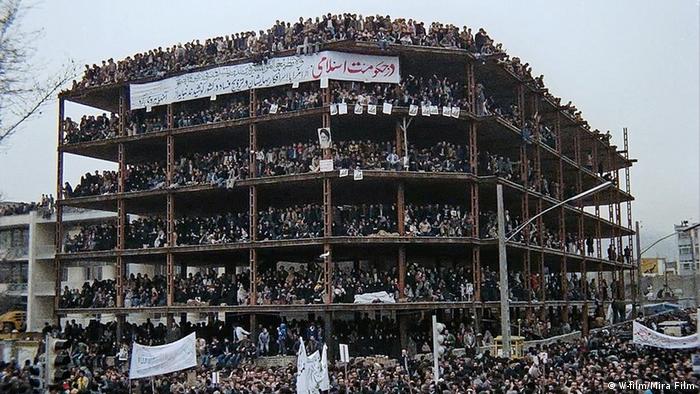 Mass protests took place in the Iranian capital, Tehran, in 1978

Hoessli also interviewed Mohsen Rafiqdoost, the driver who was supposed to bring revolution leader Ayatollah Ruhollah Khomeini from the Tehran airport into the city after his return from exile on February 1, 1979. But in the crush of enthusiastic crowds, the vehicle remained trapped in the street, and Khomeini had to be flown out by helicopter.

In the film, Rafiqdoost recounts those hours vividly. It is an authentic eyewitness account of the Iranian Revolution that drove the previous ruler, the shah of Iran, out of the country in January 1979.

Hoessli was arrested three different times while in Iran. To this day, he does not know which of the many Iranian secret services were involved. The images he managed to capture on camera in this Islamic republic are impressive and unusual: artistic film stills, quiet snapshots of faces, of nighttime street scenes, of bustling urban boulevards. 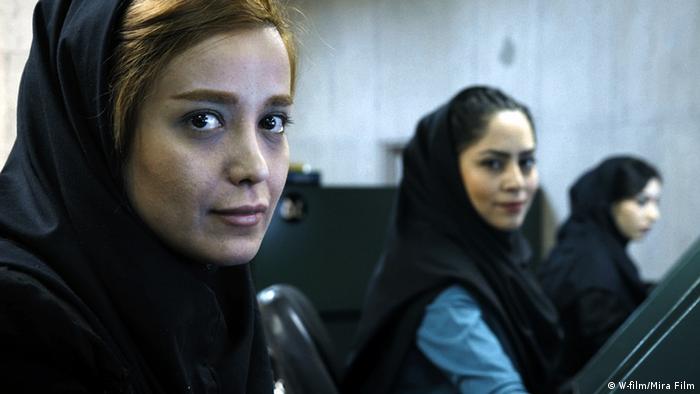 "I approach people, searching their faces: What's going on in their minds? That is an important theme of mine. How is the history of the revolutions expressed in their eyes, in their thoughts, in what is said? What remains of it?" Hoessli said.

Tracking things down in Poland

Meanwhile, while researching the film back in Poland, Hoessli requested to see the Polish secret service files about him. "I found extensive material, strange material. It seemed to express how a great degree of helplessness was gripping state institutions as they faced a revolution in the making," he said.

In the film, the director also meets his former surveillants — including Poland's former head of the secret service — confronting them with questions about the meaning and structure of the enormous surveillance apparatus in the country at the time. 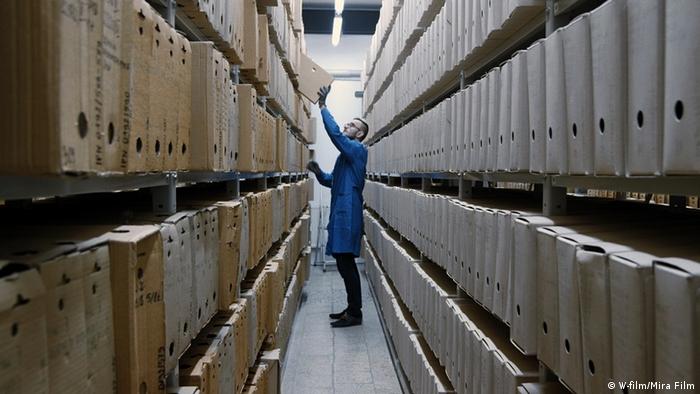 "Whatever I possibly could have done as a student stood in no proportion whatsoever to the fact that I was watched and observed around the clock," Hoessli said. "Twelve different officers were needed for this, assigned to just one person. I find something very absurd about that. And it indicates that the secret service was no longer very efficient."

'Solidarnosc': A shift toward democracy in Poland

Black-and-white archival footage, shot by cameraman Jacek Petryki, reveals the upheaval in Poland during the early 1980s. "I see men, in groups, at the Gdansk shipyard. No one is chanting slogans; there are no protest marches in the streets, no raised fists, just pensive faces," a voice comments in the film.

In an interview with Hoessli, Petryki describes how people all over the country were suddenly talking about things that were previously only discussed behind closed doors: "These workers were talking about censorship in Poland, about the right to strike, which was extraordinary."

On August 31, 1980, the Gdansk Agreement was signed. The foreign press celebrated the historic event as "the zero hour of the independent trade union called Solidarnosc." Strike leader Lech Walesa became a national hero. 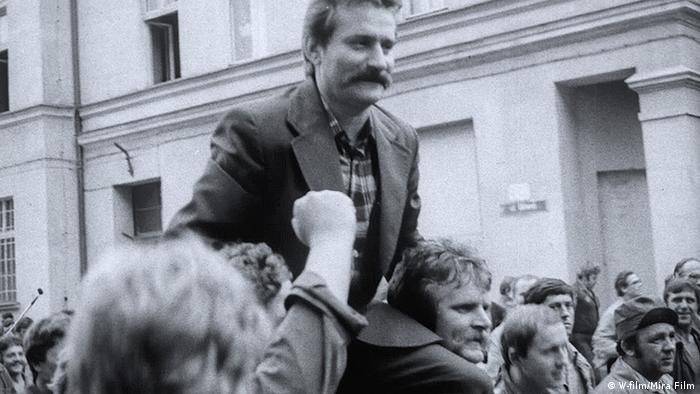 Lech Walesa, strike leader of the Solidarity movement, was celebrated in Poland as a hero

Yet the events were barely reported on Polish television. Within three months, 10 million workers and employees joined the Solidarity movement as trade union members — almost a third of Poland's population. It was revolutionary.

Yet it all came to an end on December 13, 1981: Tanks rolled up to the occupied steel mills and shipyards, and the government imposed martial law. The Solidarnosc trade union was banned and its leaders arrested. In August 1982, a pedestrian at a banned demonstration in Warsaw filmed a man being run over by a military truck as he was attempting to flee.

The images of the mass protests in Poland and Iran are deeply etched in the world's collective memory among those old enough to have seen them at the time. Current and recent events in Myanmar, Hong Kong and elsewhere echo them: revolutionary upheavals that affect the entire world. This documentary film conveys that with vivid clarity.

The Naked King: 18 Fragments on Revolution (2021), directed by Andreas Hoessli, has been screened at international film festivals and was released online in Germany on February 10.

The military junta continues to arrest senior government figures, despite ongoing protests. Protesters say they will continue until the junta ends.