The last nukes in Germany

Their location is top secret - but it's an open secret where the last US nuclear weapons are stored in Germany. There are thought to be around 20 warheads at the German Büchel military base. 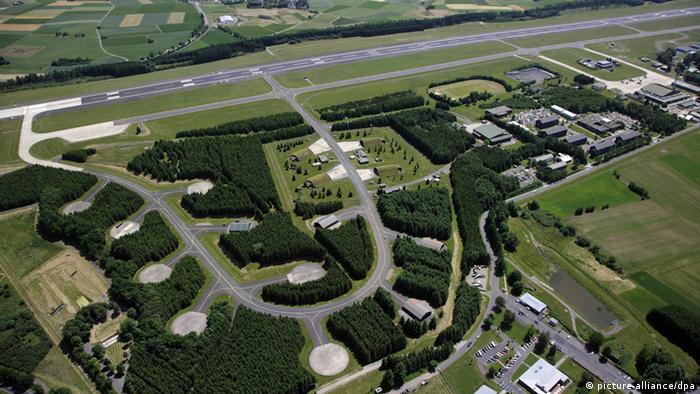 The German and American flags fluttered peacefully in the breeze that made the heat of the summer morning bearable at the main gate of Büchel Air Base (pictured above) in southwestern Germany, not far from the banks of the Mosel River. The guard at the entrance barrier looked suspiciously at Katja Tempel as she stood in front of the main entrance, pointing to the area behind the fence.

The words of the 52-year-old midwife with the short gray hair were suddenly drowned out in a deafening roar from the other side. "Those are the Tornadoes on their training flights again," she said as the noise from the fighter jets died down.

The planes take off regularly from here throughout the week, Tempel said. She spent a lot of time here, in the Eifel region near the French border, in the spring. From March to May, together with other activists, she organized the "Büchel 65" protest movement. The aim of the 65-day action was to block entry to the place where the last US nuclear weapons on German soil are believed to be stored. 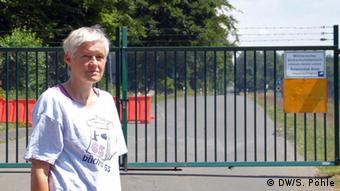 Between 10 and 20 American nuclear warheads from the Cold War era are stored underground here at the base of Germany's 33rd Tactical Air Force Wing, in a separate, guarded US military area.

Their existence has never officially been confirmed, and NATO and the German government do not comment on the matter for security reasons. Their information policy is neither to confirm nor to deny the presence of nuclear weapons in specific locations.

But the deployment of US nuclear weapons in Europe, including Germany, is an open secret. American military documents leave no doubt. And the German government does not deny the presence of nukes in Germany. The 2013 coalition agreement between Chancellor Angela Merkel's Christian Democrats and the Social Democrats says the German government will work for the "withdrawal of tactical nuclear weapons stationed in Germany and Europe" under specific conditions.

Defense expert Ottfried Nassauer of the Berlin Information Center for Transatlantic Security (bits) said it's common knowledge that there are about 20 American nuclear weapons in Büchel. There are two bomb types from the B61 bomb family, with a maximum explosive yield from 50 to 170 kilotons, he said. This is equivalent to four to 13 times the explosive power of the atomic bomb dropped on Hiroshima in 1945.

The German pilots also train with the fighter jets that would, if required, drop these nuclear weapons. "Nuclear sharing" is the NATO term for this. During the Cold War, German fighter jets armed with American nuclear bombs would have been able to stop an advance by Warsaw Pact armored forces - admittedly only after authorization by the US president. At the height of the Cold War, about 7,300 US nuclear weapons were stationed across Europe.

Nassauer said the 180 US nuclear weapons still in Europe hardly have any military importance. "The effect is more political and psychological," he said. "They assure the new members of NATO, for example, that the Americans would, if called upon, be ready to defend Europe with their nuclear weapons." 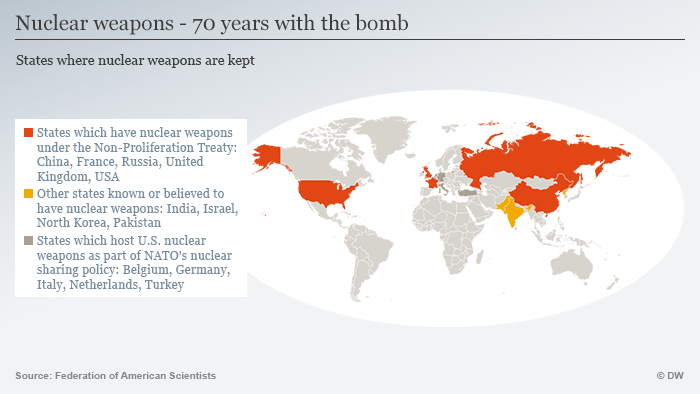 The German government has long wanted US nuclear weapons removed from German soil. In their previous coalition agreement with the Free Democrats in 2009, the Christian Democrats set this as a clear objective. And in 2010, a large majority in the German parliament voiced its support.

But so far this hasn't happened. On the contrary, as Foreign Minister Frank-Walter Steinmeier conceded recently in parliament, "We have by no means given up on this matter, but it is just as difficult as it has been over the past few years."

Perhaps it has become even more difficult. After all, the geopolitical situation is now pointing in a different direction. So a few years ago the US government decided to modernize its nuclear arsenals in Europe with a multibillion-dollar program. The long-in-the-tooth B61 bombs stationed in Germany are likely to be replaced by more precise, digitally guided missiles.

Berlin has accepted that it cannot expect withdrawal of US nuclear weapons in the coming years, Nassauer said. In addition, some parts of the German government fear they will lose influence when it comes to the planning of these weapons if the US nuclear arsenal is withdrawn, he said. That simultaneously implies a "preliminary decision that the German government can and must live with the modernization of these weapons, which will then be brought to Europe from about 2020," Nassauer said.

The Tornado fighter-bombers stationed in Büchel, which are able to deliver the old nuclear weapons, would then have to be refitted for the new ones. Originally, the German military wanted to retire the Tornado by 2020. But it is now clear that the plane will continue to be used in smaller numbers beyond 2025, and will be modernized again, if necessary.

Against this background, there's no chance in sight for a complete withdrawal of nuclear weapons from Germany - as Katja Tempel and her "Büchel 65" comrades had demanded with their protest.

The first atomic bomb was detonated in the New Mexico desert 70 years ago. Since then, nuclear weapons have had disastrous consequences for humankind and nature. Yet nuclear weapons programs continue to the present day. (16.07.2015)

They experienced the atomic bombing of Japan firsthand. Now these "ambassadors against nuclear weapons" are fighting for disarmament - and have stopped in Hamburg on their round-the-world boat trip. (04.06.2015)