Trinity: when the nuclear weapons age began | Environment| All topics from climate change to conservation | DW | 16.07.2015

The first atomic bomb was detonated in the New Mexico desert 70 years ago. Since then, nuclear weapons have had disastrous consequences for humankind and nature. Yet nuclear weapons programs continue to the present day. 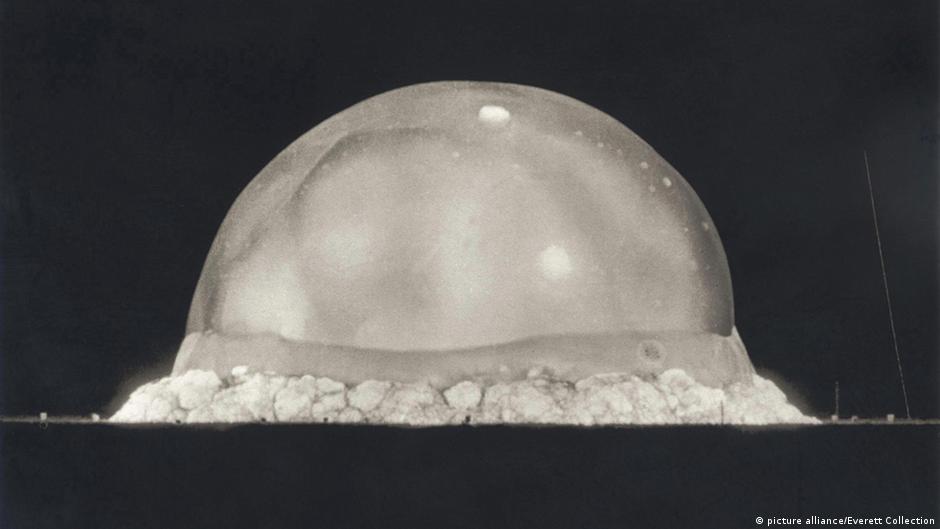 The first mushroom sprouts: Trinity 0.025 seconds after its detonation

The United States Army wanted to observe the effects of its atomic bomb in real life under testing conditions. As a testing ground, they chose the Jornada del Muerto desert about 35 miles (56 km) southeast of Socorro, New Mexico.

A team of scientists headed by physicist Robert Oppenheimer and US Army General Leslie Groves had been working on the bomb since December 1941. Nicknamed "The Gadget," it was supposed to end World War II.

The first atomic bomb was an implosion-design plutonium device: the plutonium is surrounded by explosives, which upon ignition squeeze the plutonium to higher density. That's when the nuclear chain reaction starts: the actual atomic bomb explodes.

The secret detonation was initially planned for 4:00 a.m., but was postponed because of rain and lightning.

The atomic bomb exploded with an energy equivalent of 20,000 tons of TNT. In his official report, General Thomas Farrell wrote that "the lighting effects beggared description." It could still be seen almost 186 miles away. 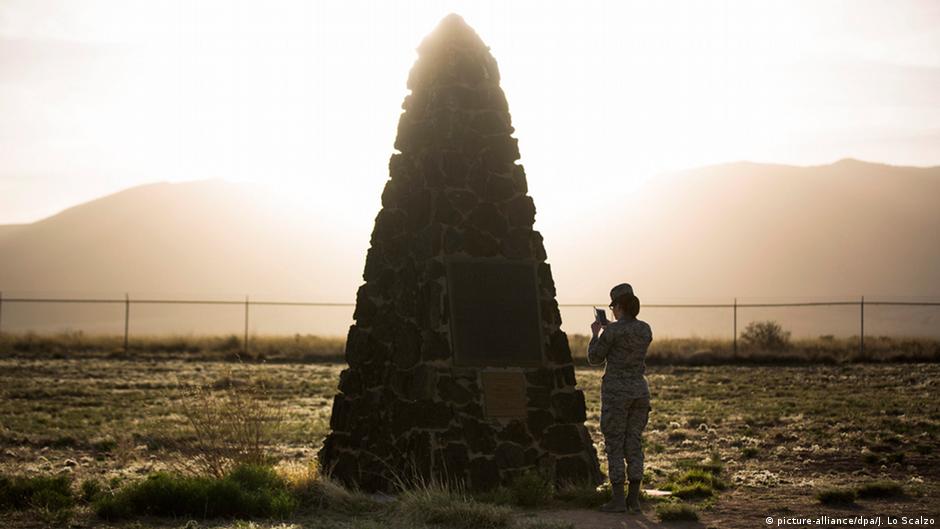 Memorial on Trinity ground zero: "Where the world's first nuclear device was exploded on July 16,1945"

Within a radius of about a mile, all form of life was eliminated.

The explosion reached such a high temperature that the sand around Trinity ground zero melted. A glassy, light greenish residue formed, called trinitite. It is available from mineral dealers. Trinitite was said to be harmless and good for jewelry. That's not true, though: the material is weakly radioactive. 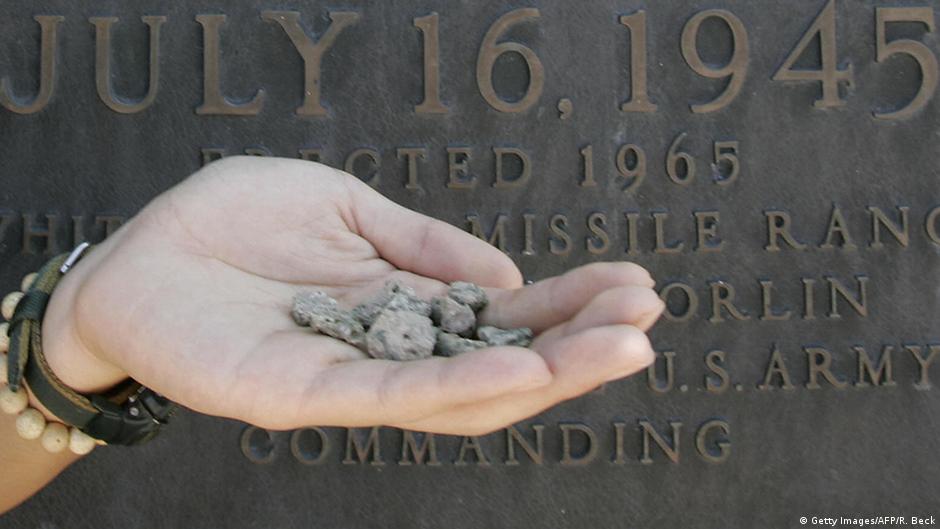 The end of the beginning

On August 6, about three weeks after Trinity, the United States Air Force dropped an atomic bomb on the city of Hiroshima. A second bomb followed on August 9, hitting the city of Nagasaki.

Just as the Americans had planned, using the atomic bombs led to the final end of World War II. But it came at a high price: 200,000 people lost their lives - about 98 percent of the cities' population. They died either immediately in the detonation, or afterward from long-term radiation poisoning.

The radiation contaminated groundwater and soil. Years later, people still became sick and died from radiation. Today, the leukemia rate in Hiroshima continues to be higher than in the rest of Japan. 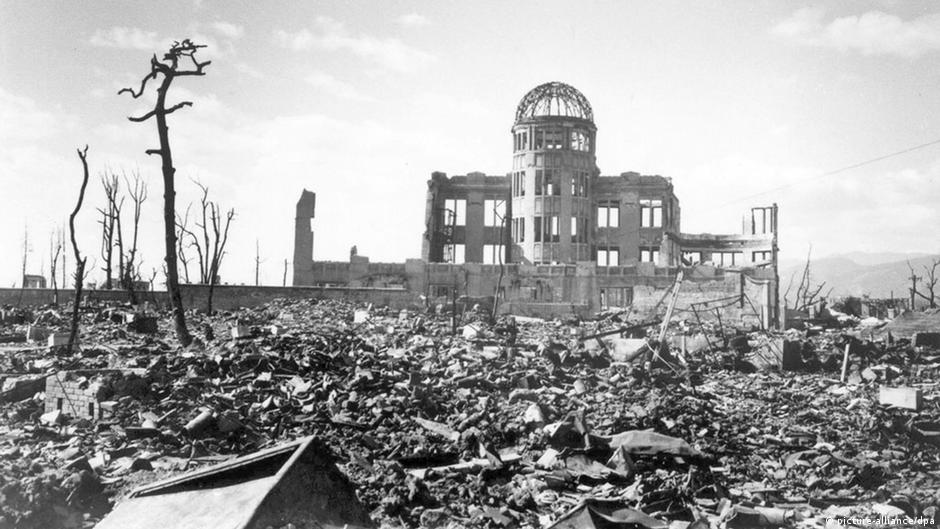 Nuclear testing in the Pacific Ocean

Yet the end of World War II didn't mean the end of nuclear weapons programs. The Cold War ignited an arms race, in which atomic bombs played the major role.

In the 1940s and 50s, the US Army tested more than 20 atomic bombs at Bikini Atoll in the Marshall islands.

The natives were resettled to the much smaller Rongerik Atoll. But due to a lack of food there, many residents starved. Those who survived, and their descendants, now live on remote Kili Island and receive monetary compensation from the US government.

In 2010, UNESCO named Bikini Atoll a World Heritage site. It is popular with scuba divers, because ten shipwrecks lie on the sea floor in the lagoon. The Americans brought these ships to the atoll roughly 70 years ago to investigate the effect of an atomic bomb on a naval fleet. They must have been quite satisfied: all ships sank during the tests. 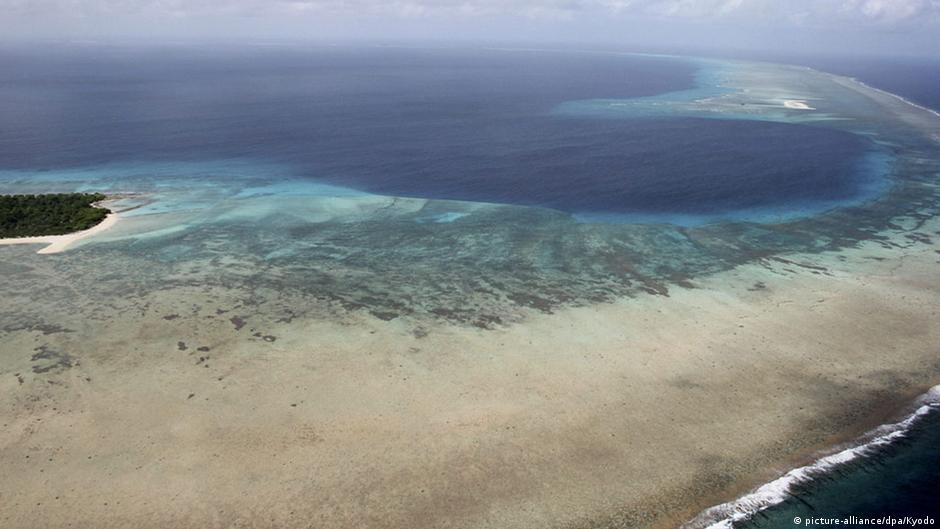 Bikini Atoll: The darker sea area in the upper right is actually a crater, created by the 1954 detonation of a hydrogen bomb

According to the International Atomic Energy Agency, radiation at Bikini Atoll has dropped to the point that staying on the islands and swimming in the sea isn't dangerous. They do warn against living on Bikini Atoll permanently, however: Plants that grow there are still contaminated by radiation. Residents would be completely dependent on supplies from abroad.

One of them is Iran. The country became a non-nuclear-weapon party to the Treaty on the Non-Proliferation of Nuclear Weapons in 1970, and declares its nuclear programs to be peaceful in nature. But many states worry that Iran's true intention is to develop nuclear weapons.

In July, the international community and Iran reached an agreement after countless rounds of talks. The deal imposes new provisions for the inspection of Iranian facilities, and will aim to keep Iran from producing enough of the fissile material it would need to make a nuclear bomb.

The last surviving crewman from the plane that dropped the atomic bomb on Hiroshima has died. The weapon caused a massive loss of life, and with it came decades of debate over the use of nuclear technology. (30.07.2014)

Lise Meitner was a brilliant Austrian physicist of Jewish decent, and a pacifist. But her work on nuclear fission helped lay the groundwork for the building of the atomic bomb, the deadliest weapon of all time. (08.01.2014)

Nuclear bomb tests contaminate soils, while nuclear accidents and X-rays are a direct threat to our health. At a world summit this week, doctors called for more protection and awareness. (29.08.2014)