In Hamburg, Hiroshima survivors share tragedies of war | Germany| News and in-depth reporting from Berlin and beyond | DW | 04.06.2015

They experienced the atomic bombing of Japan firsthand. Now these "ambassadors against nuclear weapons" are fighting for disarmament - and have stopped in Hamburg on their round-the-world boat trip. 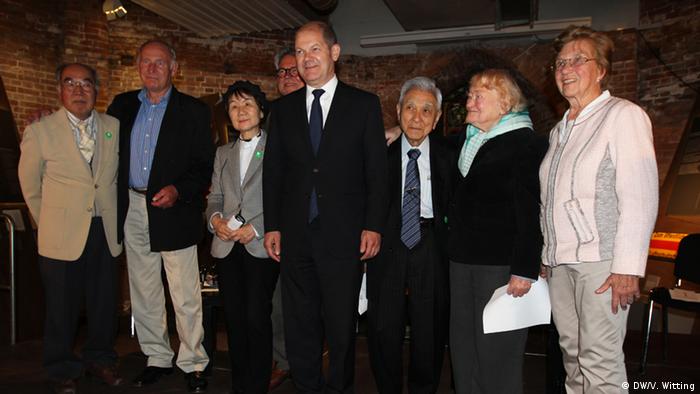 A blue and white flash was all that Nobuo Miyake saw as he sat in a streetcar at the time. "I thought it was a short circuit," the 86-year-old said. On the morning of August 6, 1945, he was on his way to school. He was only 2 kilometers (about a mile) away from the hypocenter and instinctively he made the right decision: He jumped out of the train. "Then I was blown off my feet by an infernal blast wave," he says. It saved his life. Miyake remained silent for decades after, much like many other Hibakusha, as these witnesses to one of history's cruelest moments are called in Japan.

Now, the survivors of the American atomic attacks on Hiroshima and Nagasaki are sitting together with World War II survivors from Hamburg for a panel discussion. In front of several students, they are speaking out against forgetting - against war.

"You must not forget what war means," Lore Bünger says. She had been an enthusiastic supporter of Adolf Hitler. "But, when we were spending all of our time in underground bunkers, cowering in fear as the bombs fell, I realized I had been wrong."

Hamburg Mayor Olaf Scholz had extended the invitation to the survivors of the US nuclear bombs. Good relations between the port city and Japan are a tradition, mainly based on trade. Beyond that, Scholz is a member of the Mayors for Peace netowork, which also helped organize the Peace Boat world tour for the survivors. The boat is currently anchored in the port of Warnemünde and will continue its journey from there. Next stop: Copenhagen. Its unwavering mission: No more war, no more nuclear proliferation! 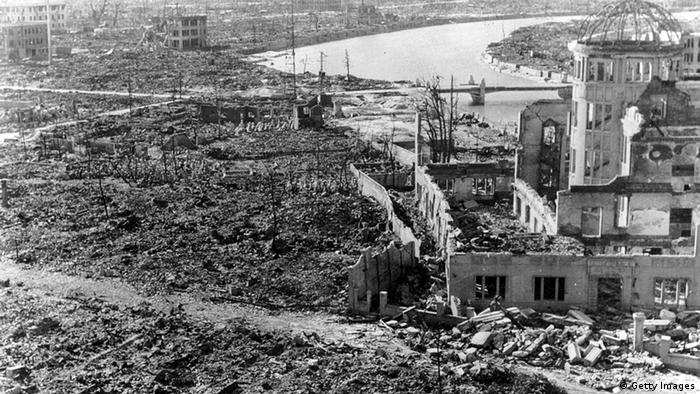 Up to 250,000 people died from the effects of the nuclear bombs dropped by the United States

Peace Boat: The name says it all

In his short speech, Scholz mentioned the "shock" of the dropping of the atomic bombs 70 years ago - of the events for which the names Hiroshima and Nagasaki now stand. And also of the "painful and tedious" work of coming to grips with Nazi dictatorship in Germany, a task that continues to this day.

Masao Ito knows full well what Scholz means: "We finally have to improve relations with our Asian neighbors, and we want to learn from Germany in that regard." He believes politicians need to recognize this. "Japan and Germany were aggressors as well as victims," Ito said. "One has to understand that fact." 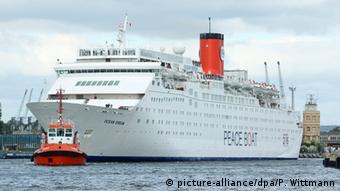 The peace boat is ferrying the survivors on their tour

Honoring the victims of the attacks is very much a part of Japanese raison d'état today, part of its culture of remembrance. However, a national culture of apologyä is still missing.link:18318949:Neighbors bring that point up regularly#, as did Chancellor Angela Merkel during a recent visit to Japan.

How to deal with war guilt?

Bünger, the oldest of the panel's participants, hesitates to give advice, simply saying that "awareness helps, and speaking with one another." 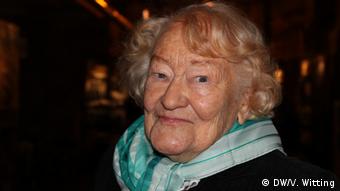 It is no coincidence that the discussion between survivors of the atomic bombings and the firestorm of 1943 is taking place in St. Nicholas' Church. It is itself a peace memorial. The bell tower was a target marker for American and British bombing raids during the Second World War, and the church was heavily damaged on July 28, 1943, during Operation Gomorrah. Today, a museum housed in the ruins of the main church serves as a monument to the victims of war and National Socialist tyranny in the years between 1933 and 1945. And that is where the panel participants now sit and discuss, among the defused and rusted bombs, among the photos and relicts of a destroyed Hamburg.

"As activists for peace and against nuclear proliferation, what worries you most in Japan today?" one of the students asks. The answer in unanimous: the revision of Japan's peace-based constitution. Prime Minister Shinzo Abe recently pushed through a constitutional "reinterpretation" effectively nullifying Article 9, which had codified the renouncement of the right to use belligerent force. The new defense strategy is thus a radical departure from the doctrine of pacifism that had been in place since 1947. That worries Mr. Miyake: "We have had peace for 70 years, specifically because of the renunciation of force anchored in Article 9. Now we are moving toward militarism."

Bünger listens intently, and then, toward the end of the discussion in the catacombs of the Hamburg anti-war museum, speaks: "Just raise your children in peace."

German Chancellor Angela Merkel recently urged Japan to mend postwar ties with its Asian neighbors. Professor Ian Buruma talks to DW about the differences in how the Japanese and Germans perceive their wartime guilt. (08.04.2015)