Memories of a day in May

Was Germany defeated or liberated on May 8, 1945 - and was it a day of shame or a turning point? For 70 years Germans have agonized over the war, its origins and its end - and the question of German guilt. 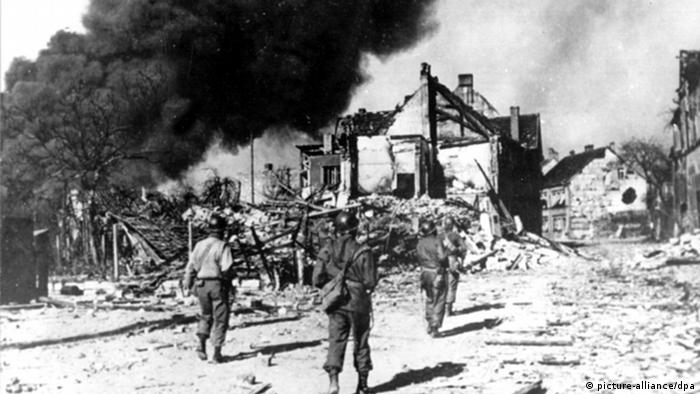 When World War II finally ended, it was less a matter of joy than "dull relief," as historian Gerhard Brunn wrote in retrospect about the emotional state of German survivors.

Memory is personal. Whoever was a German Wehrmacht soldier in Soviet captivity remembered a far different May 8, 1945 than did a civilian who escaped unscathed. Those who were driven from their homes in East Prussia were more likely to consider the war's end a catastrophe than Germans living in US exile who suddenly felt free that day. And that's without even mentioning the feelings of those who had survived Auschwitz.

The day that marked the end of World War II in Europe has known many meanings. Over the decades the "zero hour" was subject to repeated reinterpretation - at least in West Germany.

But what united both West and East Germany in the early postwar years was a feeling of having suffered during the war, rather than any sense of responsibility for waging a war of extermination. In that period, the collective memory attributed German crimes exclusively to the demon Hitler and "the Nazis." They were juxtaposed against the German masses - nameless, innocent individuals who had known nothing.

For decades, Germans in East and West did not really want to contemplate what had happened to them up till 1945, or what responsibilities they bore. Germany succeeded only much later in overcoming its past.

Anyone who wants to understand how Nazism was handled both officially and publicly for 20 years after the war need only read a few passages from a speech West German President Heinrich Lübke delivered to the Hamburg Chamber of Commerce on May 7, 1965. He said nothing about mass murder, instead expressing regret that patriotism and loyalty to one's homeland often faced disparagement.

His words came at the very same time closing arguments were being made at the Auschwitz trials in Frankfurt.

In those first two decades, May 8 had a very limited presence in West German public life. There was no mourning of victims; instead, the date served as an occasion to bemoan the division of Germany. Not infrequently, leading politicians, especially Christian Democrats, offered public affirmations that the German Reich - the country in its prewar borders - still existed.

West Germany focused much more strongly on official remembrances of July 20, 1944 - Claus Schenk Graf von Stauffenberg's attempt to assassinate Hitler - and June 17, 1953, the workers' uprising in East Germany against the communist government. It was easier to derive positive German traditions from these two dates.

It was a very different matter on the other side of the Iron Curtain. East Germany ritualized its commemoration of the end of the war early on. The communist government declared May 8 a holiday only months after it was founded in 1949. It was a vehicle for its own view of history. The capitulation of the German Reich was celebrated as the Day of Victory of the Red Army over Fascism.

Until 1989, the year the Berlin Wall fell, the May 8 celebrations served as visible evidence of the close ties with the Soviet Union and thus proof that East Germany was on the winning side. Consequently, there was no reflection on responsibility for the German past. Nazism was officially regarded as fascism - and that, as far as the leadership was concerned, had been consigned to history. Deviations from this party line did not exist. 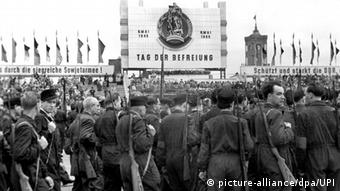 East Germany's communist rulers made a big show of the 'victory over fascism' on May 8 - here in 1955.

It was a total contrast to West Germany, where the meaning of May 8 came to be constantly reevaluated and reinterpreted. This was characterized by a significant shift in the answer to the question of what that day meant to Germans. Even so, it was understood as a defeat for decades before it came to be conceived of as liberation.

"A people that has achieved such remarkable economic success has the right not to have to hear any more about Auschwitz," Franz-Josef Strauss is claimed to have said in 1968. The powerful leader of Bavaria's governing Christian Social Union never took legal action against the press when this quotation appeared in print several times, even though he was not squeamish in dealing with the media. Whether he said it or not, the statement encapsulates West Germany's concentration on economic success as a form of psychological repression and insufficient acceptance of guilt. 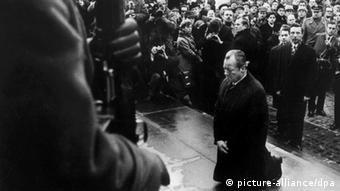 A pivotal moment in German-Polish relations came on December 7, 1970, when Chancellor Willy Brandt fell to his knees in Warsaw.

At the other end of the spectrum was the gesture of Willy Brandt on December 7, 1970 in Warsaw. The chancellor fell to his knees in front of the Monument to the Ghetto Heroes, silently asking the victims of German tyranny for forgiveness.

That moment was a historic turning point, understood as a "first serious symbolic acknowledgement of German guilt," as historian Peter Hurrelmann described it. It encapsulated a change in perspective on the Nazi period that asserted itself in the 1970s and that slowly displaced the old understanding that it had ended in defeat.

It was this perspective of guilt that Walter Scheel articulated in his May 8, 1975 speech. Thirty years after the war ended, the West German president spoke openly and candidly about German responsibility. He called what had happened between 1933 and 1945 the failure of an entire generation.

Even the 1980s were marked by heated political debates surrounding the question of how May 8 should be remembered. Until then, interpretations had the upper hand in which accounts of the Nazis were almost entirely lacking in perpetrators or followers. 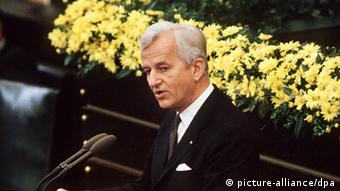 That changed on the 40th anniversary of the war's end. West German President Richard von Weizsäcker's speech on May 8, 1985 was a watershed.

Von Weizsäcker reframed the historical date as a day of liberation from the Nazi regime. And he looked back further to place the end of the war in context with its prerequisite: Hitler's assumption of power on January 30, 1933.

Many who had been infected by the Nazi ideology or even guilty of its crimes were still alive. For them, May 8 was still a day of defeat, four decades on. Not so the younger generation. But no one in such a position of authority had properly articulated this before.

Almost no one, that is: Chancellor Helmut Kohl had previously spoken of a day of liberation, but the media echo had been faint. In contrast, his attempt that year to create harmony between victors and vanquished, perpetrators and victims created an uproar. Kohl's appearance with US President Ronald Reagan at the Bitburg cemetery, where SS men were also buried, proved to be a media policy fiasco.

Kohl's attempt to broaden the focus to include Germans as victims failed. They simply had not suffered under Nazi tyranny in the same way that Jews or the peoples of the Soviet Union had. 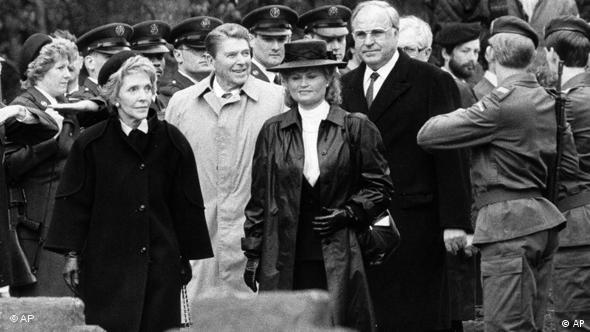 For several years now, interest in the history of National Socialism has been booming in reunified Germany. The remembrance machinery has been operating at full steam as television, newspapers and books battle for viewers and readers.

Superficially, at least, Germany has an image as world champion in dealing with the past. Perhaps most notably, the concept of liberation has held sway since 1985.

In parallel, however, a strand of contemporary history has emerged that identifies the Germans as victims of the Hitler era. Indeed, Germans were also expelled from their homes, raped en masse and killed in hails of bombs.

This context may result in a tendency toward a more lenient judgment on matters of guilt and responsibility - and a view that "blurs the difference between perpetrators, victims and followers," as historian Norbert Frei put it.

But as long as the core interpretation of May 8, 1945 is not subject to revisionism, this is legitimate and understandable in human terms. "The special German path to freedom," philosopher Peter Sloterdijk wrote, "passed through the needle's eye of defeat."