The largest farewell: The Freddie Mercury Tribute Concert 25 years ago 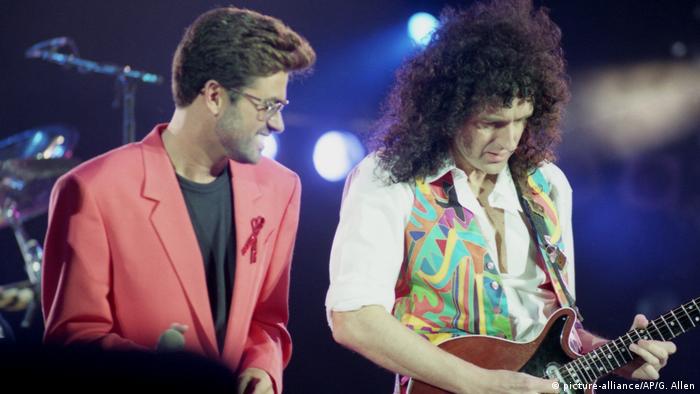 On the evening of November 24, 1991, the day Freddie Mercury died of AIDS, the three remaining Queen members, Brian May (top picture, right), Roger Taylor and John Deacon, decided to celebrate the life and legacy of the charismatic rock star in a style that he would approve of.

To this day, The Freddie Mercury Tribute Concert for AIDS Awareness remains the largest concert held in tribute to a deceased musician. The 72,000 tickets for the London Wembley Stadium were sold out within a few hours - even though none of the performers of the concert had been announced yet, apart from the remaining members of Queen.

The big names followed quickly enough, though, and there were more than just a few: David Bowie, George Michael, Elton John, Guns N' Roses, Liza Minnelli, Metallica, Annie Lennox, Liz Taylor, and many other artists all wanted to pay tribute to Freddie Mercury on stage.

The concert was broadcast in 76 countries, and about one billion people watched the show live. All proceeds were donated to a specially created AIDS charity organization. 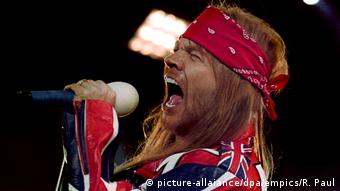 The first part of the evening was a high-profile rock concert, with bands like Guns N' Roses and Metallica performing their own songs as well as Queen covers. Hollywood legend Liz Taylor then gave an AIDS prevention speech.

Even with all that star power, that was just the warm-up act to the core of the program, when the remaining members of Queen performed with a series of guest singers.

Guitarist Brian May admitted that he was extremely nervous before the beginning of the show, but not so much about the music; he rather feared he would forget to name someone.

The numerous guests also had their own reasons to be nervous when attempting to cover one of the world's best rock singers.

They didn't all perfectly succeed: The Who's Roger Daltrey couldn't quite reach those high tones on "I Want It All," Paul Young's "Radio Ga Ga" was less than memorable, and Led Zeppelin's Robert Plant had problems remembering the lyrics to the epic song "Innuendo," which Mercury had composed as a homage to Led Zeppelin.

"I tried to learn them while I was on holiday in Morocco, but I ended up with a huge lyric sheet taped to the stage," he later said.

In the annals of rock music history

Other critics complained that many of the performing artists didn't seem connected to Freddie Mercury. Queen members only had five months to organize the whole event.

Other numbers in the line-up have gone down in history: Elton John and Axl Rose, for example, as they sang "Bohemian Rhapsody" together. At the time, the Guns N' Roses singer was perceived as a homophobe, and the awkward hug the two singers gave each other at the end of the song didn't change that impression much.

As a close friend of Freddie Mercury, Elton John was incidentally one of the few people who came to visit him until the end of his life and who was invited to his funeral. 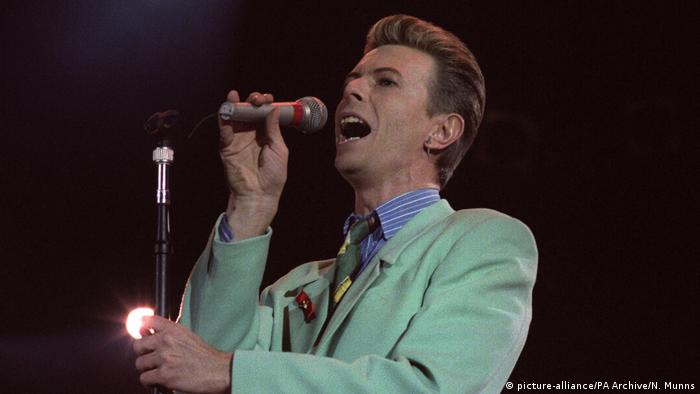 Bowie marked the event in an unexpected way

David Bowie sang "Under Pressure" with Annie Lennox, who replaced Freddie Mercury in the hit he had recorded with Bowie in 1981. Then, after singing "We Could Be Heroes," Bowie spontaneously went down on his knee and started reciting the Lord's Prayer. That confused the audience - some even started to laugh. Even Bowie later admitted he wasn't quite sure what he was doing: "I felt as if I were being transported by the situation. I was so scared as I was doing it," he said.

"We Are The Champions" was kept as a finale, a perfect fit for the diva Liza Minnelli, who was supported by everyone else who had performed at the concert.

George Michael undeniably offered the best performance of the evening. With his version of the Queen classic hit "Somebody To Love," he captivated fans just like Freddie had during his peak. "It was probably the proudest moment of my career, because it was me living out a childhood fantasy: to sing one of Freddie's songs in front of 80,000 people," Michael later said.

Still fans and critics all agreed on one thing: No one was as good as Freddie Mercury that night. That would probably have pleased him, too.

The British pop star and former singer of Wham!, George Michael, has died at the age of 53, according to his publicist. The global superstar reportedly "passed away peacefully at home" in England. (26.12.2016)