The hazy notion of safe countries of origin | Europe | News and current affairs from around the continent | DW | 13.08.2015

The hazy notion of safe countries of origin

In order to cut down the number of asylum applications, three Balkan states are set to be labeled as safe countries of origin. Yet Albania, Kosovo and Montenegro struggle with enormous problems. 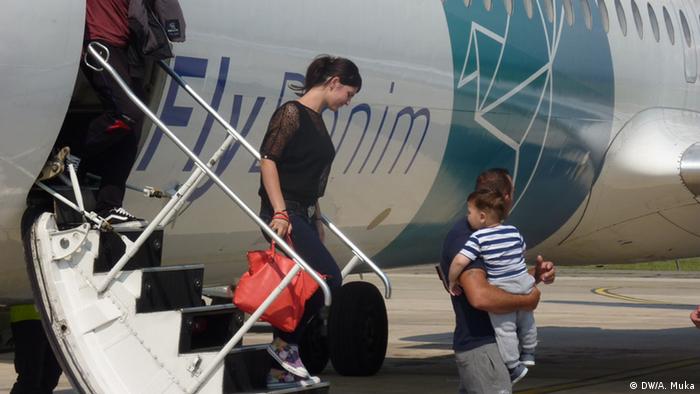 The Bavarian Ministry of the Interior believes the matter is clear-cut. "Yes, we are convinced that Albania, Kosovo and Montenegro are safe countries of origin," says the ministry's spokesman Oliver Platzer. "The Federal Office for Migration and Refugees rejects more than 99 percent of asylum applications from these countries on the premise that they are obviously unfounded." (The photo above shows rejected Albanians returning home.) Positive responses to applications have only been given to asylum seekers for humanitarian reasons; for instance, when the applicants from these countries are ill or in frail health.

The prime ministers of the affected Balkan countries seem to share the same views. "We are in favor of Kosovo being classified as a safe country of origin in German law," wrote Montenegro's and Kosovo's leaders in a letter to the David McAllister, the EU Balkan representative.

The German human rights organization Pro Asyl views the situation differently. "I have great reservations about labeling these countries as safe countries of origin," says Bernd Mesovic, the organization's spokesman. In Montenegro and in Kosovo, one can hardly speak of rule of law as we know it in the West. In Montenegro, Prime Minister Milo Djukanovic fosters an almost dynastic system, and many speak of mafia-like state structures, criticizes Mesovic. And in Kosovo, the Roma minority suffers massive discrimination. 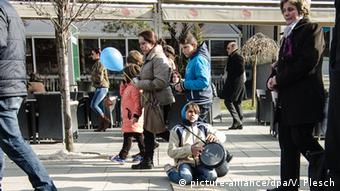 Begging in Kosovo is commonplace

The precarious economic situation makes life hard particularly for young people. Even a quarter of a century after the end of Enver Hoxha's primitive communist regime, Albania remains one of the poorest countries in Europe. "Unemployment is estimated at about 30 percent but no reliable figures are available," says Konrad Clewing, a researcher at the Institute for East and Southeast European Studies in Regensburg, Germany. "Industry is extremely underdeveloped and agriculture in most parts of the country has been left in a state of ruins. Furthermore, the economic crisis in Greece has led to the loss of hundreds of thousands of jobs held by Albanian immigrants there. This also means that foreign money has stopped flowing into Albania.

The situation is even worse in neighboring Kosovo, says Belul Beqaj, a political scientist from Pristina, the capital of Kosovo. Almost half of the country's 1.8 million inhabitants live in poverty, and about 45 – 50 percent of employable people have no work. Most of them are young people – Kosovo is the country with the average youngest population in Europe.

According to Transparency International's findings, Kosovo also ranks as the country with the highest level of corruption in Europe. "Cronyism is ubiquitous. It is impossible to find a job without connections. Everything is based on family or clan connections," says Beqaj. "The feeling that one cannot achieve anything with normal means, the lack of perspectives, the feeling of helplessness and insecurity are all reasons why young people want to leave the country." 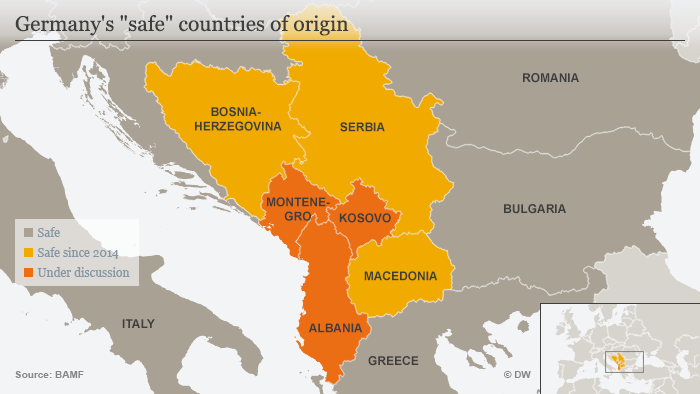 Just want to get out

The latest study on young people in Europe finds that the majority of young people in the western Balkan states are dissatisfied with the state of democracy in their countries and plagued by unemployment and poverty. They have no perspectives, show no interest in politics, and mistrust political and social institutions.

In Kosovo, 55 percent of young people surveyed have said they want to leave the country and in Albania, even 67 percent. The situation is similar in other countries in the region that Germany has already deemed as safe countries. In Macedonia, 53 percent of young people have expressed their desire to leave the country and in Bosnia-Hercegovina, 49 percent.

The Bavarian government aims to keep people from these countries from even entering Germany. It backs "high profile collective deportations," says the Bavarian interior ministry's spokesman Platzer. He hopes that the new classification of the states as safe countries of origin "works as signal, telling people not to come anymore."

Pristina's Belul Beqaj does not believe it will work. "Who would stay in a country where there are no prospects, especially when the new country faces many hardships," asks the political scientist rhetorically. Beqaj claims that everybody hopes to be among the 0.3 percent of the recognized asylum seekers.

Nonetheless, Beqaj still hopes that many Kosovars are sent back from Germany – to the benefit of their homeland. "Because we need them," he says. Among those seeking asylum, many are brave or dissatisfied individuals, but quite often, they are educated. "They should change things here in Kosovo; they should protest here, so that politics change and no one needs to leave the country anymore."

Germany's interior minister has described attacks on asylum-seeker shelters as "unacceptable" and "unworthy" of Germany. He also expressed confidence that Germany can cope with an unprecedented wave of migrants. (13.08.2015)

Rising numbers of refugees have proved to be a major challenge for physicians as well as government authorities. Treating children can be tricky, points out pediatrician Eckard Hamelmann. (13.08.2015)