The EU's microchip dilemma: Too little or too late? 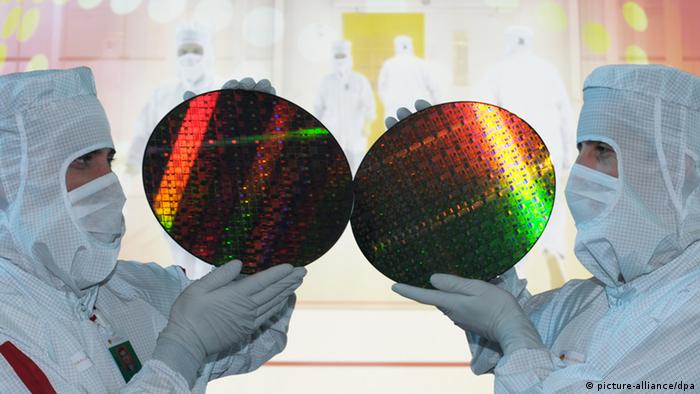 Chipmaker GlobalFoundries is part of the Cool Silicon cluster in Dresden, Germany

The European Union said in March it planned to more than double microchip manufacturing output in the 27-member bloc to 20% of the global market by 2030. The announcement came after a supply crunch disrupted production earlier this year, in particular for German auto manufacturing, the key industry in Europe's most important economy.

Chip shortages led to a million fewer cars — 5% of total production — being produced in the first quarter of 2021 as compared with the same period a year earlier, according to market analyst IHS Markit.

The bloc's ambitious "Digital Compass" plan is based on an investment of €140 billion ($166 billion) in the digital sector over the next two to three years. Brussels also wants EU firms to step back into the most advanced two-nanometer chip production arena after spending the last two decades winding it down and outsourcing it to Asian countries.

The EU's new strategy was announced by Margrethe Vestager, the European Commission's executive vice president for the digital age, and Internal Market Commissioner Thierry Breton, who are expected to release more details soon after discussions with the world's leading chipmakers Intel, Taiwan Semiconductor Manufacturing (TSMC) and Samsung Electronics on April 30.

The EU's plans are rumored to involve the creation of a new company or a partnership with TSMC or Samsung. Breton wants a leading chipmaker to site a major plant in the EU. Such a 'eurofab' — an EU-backed microchip manufacturing facility — could reportedly be located in France or Germany's Dresden cluster, while Poland has also been mentioned as a potential location.

And therein lies the rub. As Natalia Drozdiak wrote on Bloomberg this week: "Weaning Europe off chipmaking technology from the US and Asia promises to be extremely difficult — particularly because it may need help from those same foreign entities to boost its own production."

In the crosshairs of the US-China spat

The EU is driven by the geopolitical desire to avoid getting caught in the crossfire of a China-US tech trade war. The Trump administration hit Beijing with measures aimed at lowering China's access to the technology, and Beijing reacted by boosting its homegrown chipmakers. US President Joe Bide, meanwhile, is seeking $37 billion in funding to increase US domestic manufacturing.

"The industry has concentrated in South Korea and Taiwan, while Europe was focusing on fundamental research, but also specific applications of chip design, such as for the automotive industry," Mathieu Duchatel, director of the Asia Program at the Montaigne Institute, told DW.

Europe's chip industry produced 70% of its components in the EU in 2012, while last year it was only 54%, according to ZVEI, the industry association.  Among the 10 leading semiconductor manufacturers in the world, only one is European — NXP — and even that could disappear as its US rival Qualcomm plans to take over the Dutch company.

Europe led the world two decades ago thanks to its strong consumer electronics industry with first-generation cellphones made by Nokia, Ericsson and Siemens. But after these dropped in popularity, chip production moved largely to Asia. Manufacturers also started selling more of their chips in Asia; companies now generate 60% of their sales there, so it made sense for production to move closer to sales markets. 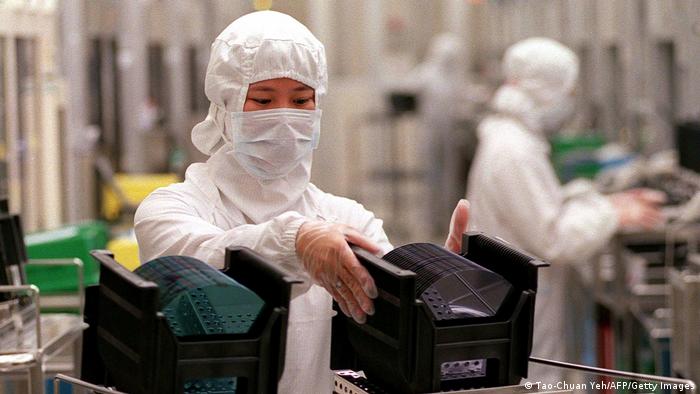 Taiwan produces 20% of all semiconductors

"Locations outside Europe currently have clear advantages — on the one hand, in terms of the supply chain and affordable labor, and on the other hand in terms of the buyers of our technologies," Andreas Gerstenmayer, CEO of AT&S Austria Technologie & Systemtechnik, told DW.

Setting up a large state-of-the-art plant can cost $20 billion, according to a report by the United States' Semiconductor Industry Association (SIA), and it may take years before it makes a profit. "The goal is challenging. Europe is new to industrial policies, the whole EU system is geared towards supporting R&D," Duchatel said. "And at the same time, China, the US, Taiwan and South Korea all intend to run faster on chip manufacturing."

Taiwan produces 20% of all semiconductors, South Korea 15% and Singapore 7%. TSMC and South Korea's Samsung dominate, and TSMC plans to invest $100 billion in the next three years to grow capacity. Samsung plans to increase semiconductor-related capital expenditure by 20%, up to $31 billion this year.

This dwarfs the US firm GlobalFoundries' $1.4 billion capital expenditures this year on boosting capacity at its Dresden facility.

There may be trouble ahead

But setting up a major plant in Europe could prove to be a strategic mistake as the continent lacks a strong market.

"This is a very demanding and ambitious project in terms of implementation," Gerstenmayer said. "Especially because there are not really any large users in the high-end sector in Europe, such as Google, Apple or Amazon, and thus the driving force is missing. We are only at the beginning of our journey here."

Mark Liu, chairman of Taiwanese foundry TSMC, said that if entire semiconductor supply chains were replicated in Europe, it would lead to overcapacity, At a press conference on March 21, he described the EU plans as "economically unrealistic."

Liu said that a part of the current chip supply shortage is due to double-booking of orders prompted by uncertainty in 2020 due to COVID-19 and last-minute orders as smartphone makers sought to fill a gap left by the US-blacklisted Huawei Technologies.

A report from ING also sheds light on the risk of confusing short-term supply issues and necessary structural changes.

The chips are in short supply due to the jump in demand linked to COVID-19, mainly caused by higher spending on consumer electronics, according to the report published in April. "The strong demand for home office equipment and faster-than-expected recovery from other sectors are also not helping," it read.

5G cellular networks are also rolling out, and there is a rise in demand for new compatible smartphones, while shutdowns at Texas facilities due to extreme cold and a fire at a Renesas Naka factory in Japan have made matters worse.