The Dinosaurs are Coming to Germany | Business | Economy and finance news from a German perspective | DW | 02.03.2002

The Dinosaurs are Coming to Germany

ThyssenKrupp has joined forces with US media giant Universal Studios and other partners in a joint venture to build what will be Europe's second-largest amusement park after Disney World in Paris. 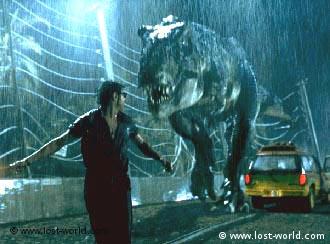 Jurassic Park and Universal Studios are coming to Krefeld, Germany

German steel and engineering group ThyssenKrupp AG and US media giant Universal Studios said Wednesday they have set up a joint venture together with other partners to build what will be Europe's second-largest amusement park after Disney World in Paris.

The 1 billion euro project, to be based near the west German town of Krefeld, is to open its gates in 2005/06, with construction to start next year. The 74 hectare park will be operated by Universal Studios Germany Development GmbH.

ThyssenKrupp and Tree AG, a specialist in amusement park design, will each hold a 23% stake in the venture, with Commerzbank Leasing & Immobilien and Westdeutsche Immobilienbank each holding 22%, and Universal holding 10% of the firm's share capital.

Having initially been hesitant about the project, Krefeld's municipal authorities are now expected to give the green light by the middle of March. The park alone will create 3,500 new jobs. Plans include two hotels, a wellness and water park, and a theme park based on Universal movies such as Jurassic Park. It will also include catering and a shopping mile.

ThyssenKrupp will not invest directly in the park but only participate in the development and marketing of the project, a company spokesman said. The group will withdraw from the venture once the park is open for business.

The VDFU association of German leisure companies warned that smaller, family-owned amusement-parks could be squeezed out of the market by major projects of this kind. Visitor numbers at Germany's 57 existing leisure parks have declined in recent times, but the VDFU said that this was due mostly to the general increase in the range of leisure activities available.

©Economy. One AG: All rights reserved. Reproduction or modification in whole or in part without express written permission is prohibited