The Devil Made Me Do It

A German couple who killed a friend by stabbing him 66 times claimed they had been acting on the orders of the devil. On Thursday they were sentenced to more than 10 years in prison and mandatory psychiatric treatment. 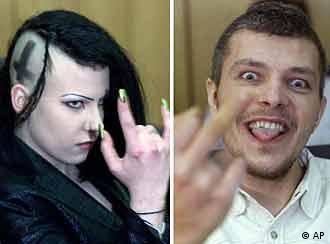 "Satan ordered us to sacrifice a human"

In a bizarre case that shocked the nation, a German court on Thursday found Daniel Ruda, 26, and his wife Manuela, 23, guilty of pre-meditated murder.

The self-professed Satanists had confessed to the brutal stabbing in their apartment of Frank Haagen, a friend and colleague, but denied that they were responsible for his death. "Satan made us do it", Manuela said.

Speaking directly to the court, Manuela, dubbed Satan’s bride by German media, explained that she and her husband could not be held accountable for their friend’s death: "It was not murder. We are not murderers. It was the execution of an order. We had to comply."

Daniel said he was merely a tool in the hands of the devil. "If you run someone over with a car, you don’t prosecute the car," he told the court.

Last July Frank Haagen’s body was found mutilated and decomposing in the Ruda’s apartment in Bochum, a city in the west of Germany.

He had been violently beaten with a hammer and was covered with dozens of stab wounds – 66 in all. A scalpel protruded from his stomach and a pentagram, the five-pointed star of the devil, was carved into his chest.

When the police arrived on the scene, what they saw was indescribable.

The couple’s apartment had been turned into an altar for Satanic worship. Human skulls cluttered the floor, cemetery lights hung from the ceiling, and a coffin stood in the bedroom.

The couple indulged in rituals like blood drinking and animal sacrifice. A court prosecutor referred to them as being fixated on human sacrifice, a central feature in their Satanic worship.

Manuela, who has an upside down cross shaved into the side of her hair and specially-fitted vampire teeth, told the court why she stabbed Haagen. "I signed over my soul to Satan two and a half years ago," she said. "Satan ordered us" to make a human sacrifice, it "simply had to be."

Daniel, who was the initiator of the crime, told the court, "I got the order to sacrifice a human for Satan".

In gory detail, Manuela then described to the court how she and her husband lured their victim to the apartment and attacked him. "Daniel struck him on the head twice with the hammer. But he suddenly stood up again... Then my knife started to glow and I heard the command to stab him in the heart," she said.

After the Satanic duo stabbed Haagen, they carved an occult star on his stomach, drained his blood into a bowl and drank it. The couple then had sex in a coffin in which Manuela usually slept.

A prosecutor who had seen the crime scene said he was horrified by what he saw. "I have never before seen such a picture of cruelty and depravity. They simply lusted for murder," he said. 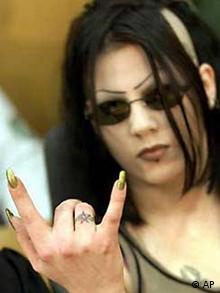 Manuela gives a maniacal pose for the camera.

Over the last few weeks the case has been the focus of sensational media coverage in Germany. In the words of the prosecutor, "it was like a show, and they were the stars".

In fact, the Satanic couple seemed to enjoy the trial. Manuela appeared in court done up in her "Gothic" look with tattoos and pasty white make up. She boasted to the media of drinking blood, sleeping on graves and being buried alive.

The couple took every advantage of the media presence by posing for photographers while making rude gestures and facial expressions. They fully lived up to the public’s image of Satanists.

Throughout the trial the couple showed absolutely no sign of remorse. After describing the crime, Manuela triumphantly announced to the court, "We wanted to make sure that the victim suffered well."

The defense pleaded for lenient sentences on the grounds of mental instability. Several witnesses testified that the couple suffered from severe personality disorders. But in the end the brutality of the crime won over and the judge sentenced Daniel to 15 years prison, Manuela to 13. Both will undergo mandatory psychiatric treatment for the duration of the sentencing.

When asked at the end of the trial if they had any last words, Manuela replied, "May Satan remain with us always." Daniel simply stated, "This is all just too stupid".