Thailand′s ′spirit houses′ believed to bring fortune and protection | Asia | An in-depth look at news from across the continent | DW | 01.09.2021

Across Thailand, people place gifts for spirits they believe will bless a home or business. The tradition has been around since ancient times and is still widely practiced today. 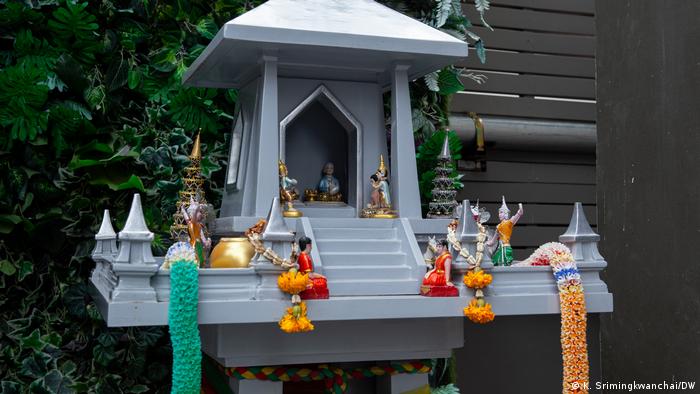 In Thailand, these structures are built to please spirits believed to bless homes

Eagle-eyed visitors to Thailand may have noticed these miniature shrines set up in cities across the country.

It is a common sight to see locals pausing on a busy Bangkok street to give such doll-house-like structures a deferential "wai" (a traditional form of greeting in Thailand).  Some leave offerings at the ornate shrines, ranging from candles, incense and flowers to food and drinks.

The houses, called "San Phra Phum," or shrine of the guardian spirit, are part of a Thai tradition of spirit worship. They can be found on corners in every Thai city and town and are seen outside high-rise office blocks, cafes and high-end restaurants, residential condos and everything in between.

"Guardian spirits are everywhere, whether near houses, temples, farmlands or rivers. They protect different places and look after us," Narongdet Sapprathueang, a spiritual adviser, told DW. 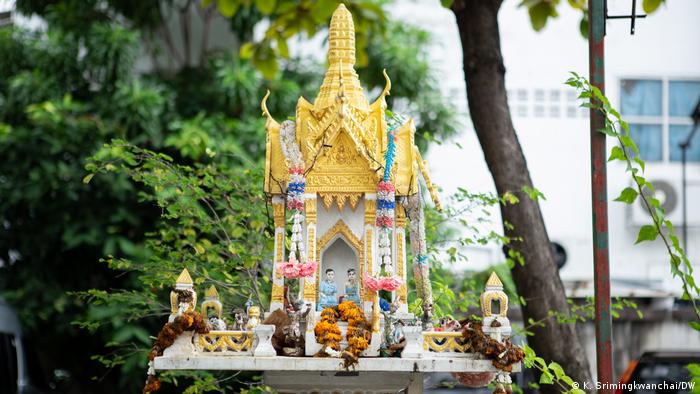 Some spirit houses are more ornate than others

Even though about 95% of the Thai population are Buddhist, many Thais also believe in these spirit-house rituals, which are thought to derive from a mixture of ancient animistic beliefs and Brahmanism (an early form of Hinduism).

The tradition of house blessing

Although not all Thais practice spirit worship, it remains widely popular, and the miniature dwellings perched on pedestals are an inherent part of the landscape.

The elaborate shrines are believed to shelter spirits that "own" the land at the location of homes and businesses. They are built in the hope that the land will be blessed and that residents and workers will enjoy good fortune.

"It is believed that appeasing the spirits facilitates happiness, prosperity and a peaceful life," said Narongdet.

However, according to the tradition, misfortune is said to come to those who fail to abide by these beliefs — in other words, if the spirits are not given the proper tributes or shown respect.

"My father didn't believe in this stuff at first and was against the idea, but I was adamant that we build one at home," said Chanidapha Yamcheun, a spirit-house worshipper.

She is convinced that her family's life has significantly improved and that they have grown closer since building the spirit house.

"My dad was without a job but he found one soon afterward and even won some money in the lottery," Chanidapha told DW. "He was converted into a believer."

How are the 'spirit houses' made?

The mini-temple-like structures vary in style. They can be simple or embellished with ornate spires reminiscent of traditional Thai architecture and are normally made of wood, concrete or brick.

Inside, the houses are often decorated with tiny figurines, including entourages of servants, dancers and animals such as elephants and tigers.

They should be placed in a visible location, which should never lie in the shadow of the building. 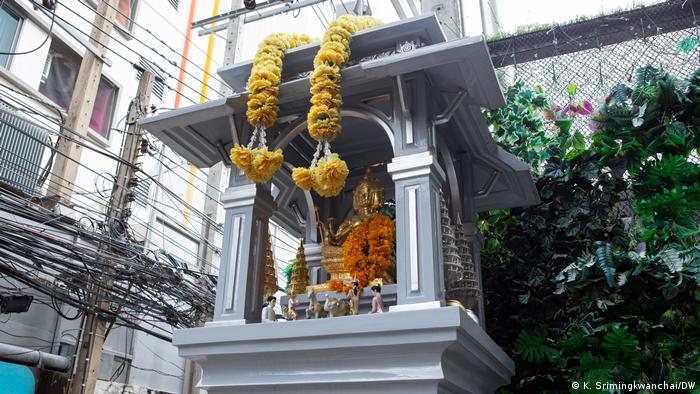 Because of the number of strict customs that come with owning a spirit house, a Brahman priest or local Buddhist monk familiar with the rituals is usually consulted to carefully determine its location on the property and calculate the best day and time for it to be installed.

Before construction begins, the spirits must be informed for them to grant permission for the use of the land. This typically involves rituals to invite guardian spirits into their dwelling.

"To set up a spirit house, first a pit is dug out and homeowners put in money, amulets, pieces of metal and colorful stones," said Narongdet, adding that this is believed to bring positive energy.

The type of spirit house depends on the wealth of the owner, but their appearance or opulence is secondary. What matters most is how the living honor the spirits.

According to tradition, spirits need food. Regular offerings include rice, a platter of fresh fruit, desserts and colorful drinks.

Homeowners or building staff members place the offerings at the front of the spirit houses every day or on every Buddhist holy day, along with garlands of marigolds and burning incense sticks.

All these touches are designed to provide a comfortable, attractive home for the spirits who live on the land where the building stands.

Those who tend the spirit house also make special wishes and requests to these spirits. When they are answered, people often express gratitude by making offerings.

"If you take care of the spirits, they will take care of you," said Chanidapha, who usually adds more servants to the spirit houses whenever her prayers come true.