Thailand still waiting for a government as tensions rise | Asia| An in-depth look at news from across the continent | DW | 30.03.2019

Thailand still waiting for a government as tensions rise

An orderly transition from military junta to elected opposition is looking less likely: Though authorities say discrepancies were due to a software error, no clear result is in sight. Julian Küng reports from Bangkok. 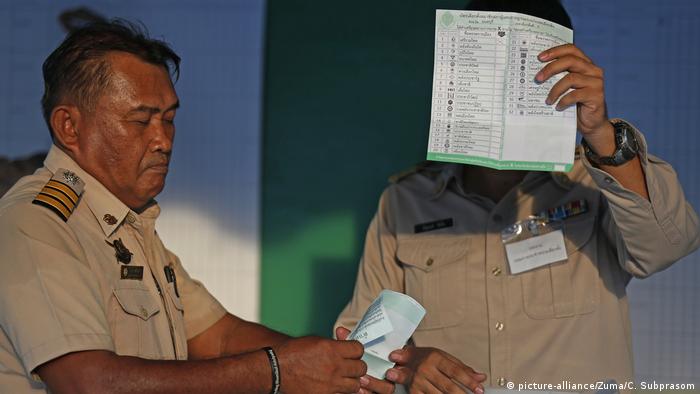 Polls closed last Sunday evening in Thailand's parliamentary elections, but nearly a week on, the results remain inconclusive. Questions about accuracy at the ballot boxes persist and jockeying between parties has resulted in a hung parliament of sorts. On Saturday, the country's election commission sought to allay concerns over accuracy and transparency, saying that computer software was partly to blame for inconsistent and delayed vote totals.

Parties that back the military won the popular vote by a very narrow margin. However, anti-junta parties, including those linked to ousted former Prime Minister Thaksin Shinawatra, announced they would unite to form a pro-democracy coalition and thus create a majority in the lower house.

At last count, opposition party Pheu Thai — originally founded by Thaksin — seems to be well on the way its way achieving 255 representatives in the lower house of parliament out of 500 by forming the seven-party alliance. Though this would actually make way for the opposition to form a government, it would not allow the alliance to elect a prime minister: For that, the 250 military-loyal senators would also need to have a say.

But on Saturday, tensions mounted yet again as Thaksin was stripped of his royal honors by new King Maha Vajiralongkorn. Though the move was chalked up to the former PM's corruption sentence in 2008 and subsequent fleeing of the country, Thaksin had this week told international media that the election results were rigged and there were several discrepancies with the electoral process. The former PM also told media about the plans for the anti-junta coalition government.

According to observers, if incumbent Prime Minister Prayuth Chan-o-cha is re-elected with only minority support, it would lead to a political blockade, in which case the military could regain control as the administrative authority and continue to govern until the next elections. Experts also say that military generals are pulling too many stings, controlling the election commission and influencing court decisions — making it even less likely that the opposition will take power. 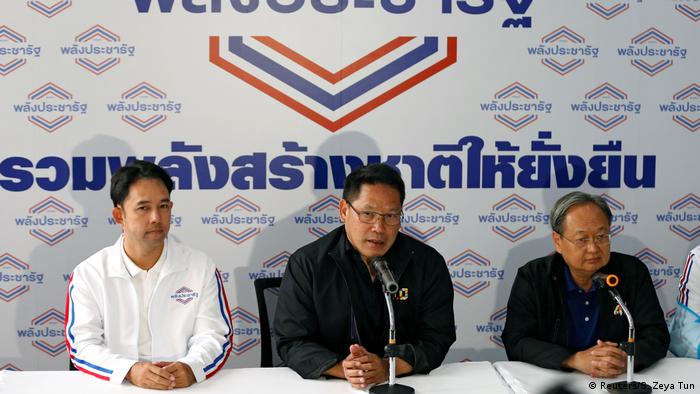 Uttama Savanayana (c), of the Palang Pracharath party, announced at a press conference on March 27: "We are confident that we can build a coalition government"

Considering all of this, it is not surprising that on Friday a blue-and-white truck from the ruling pro-military Palang Pracharath party rolled through the streets of Bangkok, with elected members from the junta-backed party laughing and waving to the people.

From three huge loudspeakers, they thanked their voters for the 8.4 million votes — and the election victory. Meanwhile, only a few kilometers away as the crow flies, in the IFCT Tower skyscraper, opposition party Pheu Thai was announcing a successful takeover of power.

According to current figures, Pheu Thai stands just behind the army-backed party with 7.9 million votes, and current estimates indicate the party will receive more seats in parliament.

The divergence is a result of the complicated electoral system, whereby 350 seats are allocated by direct mandate, 150 are appointed according to a proportional procedure.

The exact distribution of seats will not be announced until May 9, shortly after the coronation ceremonies for the new king come to an end.

Read more: Thai transgender politician: 'I do it for future generations'

Thailand's election commission has already caused confusion with its previous announcements. After days of hesitation, hundreds of complaints about irregularities and still-unresolved questions on the over 2 million invalid ballot papers, official election results were announced on Thursday — and questions ensued.

Voter turnout is said to have risen by eight percentage points to just under 74.7 percent. But on the Sunday the election was held, the figure was given as 66 percent, with 33,000 more eligible voters. Though the election commission has now blamed computer errors, the uncertainty has led several political activists to say that they were starting a petition to impeach the election commissioners.

Paul Chambers, a professor of political science at Naresuan University in northern Thailand, says that the unclear situation could well lead to an extension of the military government. He says that there are currently well over a hundred discrepancies that the election commission is discussing, and if they are not resolved by May 9, the elections could be annulled and the junta would remain in power.

In such a scenario, with the imminent coronation of the king in May, it would be unrealistic for new elections to be held anytime soon and the army could continue to govern at least until the end of the year. 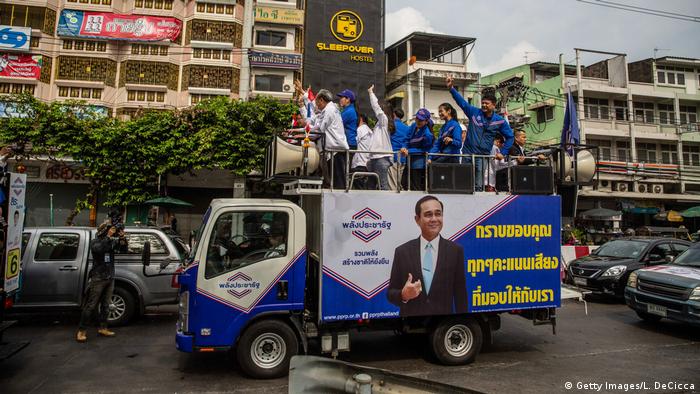 The military, with the intervention of the election commission, has other means at its disposal to force certain elected representatives to stand for election again.

And some opposition leaders, like Future Forward party founder and leader Thanathorn Juangroongruangkit and two of his top party politicians, are currently being prosecuted for alleged "cybercrimes." Authorities claim that they spread false reports about the junta. Observers say the party could even be dissolved entirely by the election commission, in which case the pro-democracy alliance would then lose 88 seats. If that happens, forming a majority would be completely out of reach.

Despite optimism for a return to democratic governance in Thailand, the first election since a 2014 coup has forced many Thais to accept that the military will continue to rule. Julian Küng reports from Bangkok. (25.03.2019)