Thailand's main opposition Pheu Thai party claims the alliance has won enough seats to try and form a government. The announcement comes amid a delay in unofficial results and allegations of voting irregularities. 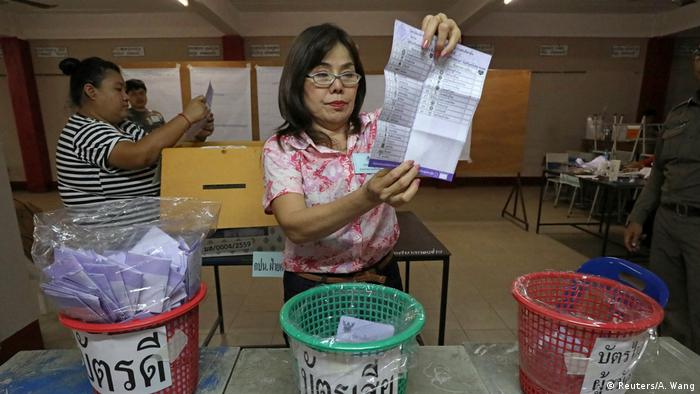 Thailand's Pheu Thai party, which was ousted in a military coup in 2014, claimed on Wednesday to have secured a majority in the lower house of parliament after banding together with six other Thai political parties.

The ruling junta-backed Palang Pracharath party has also claimed the right to form a government, with a full preliminary vote count yet to be announced in Thailand's first general election since the coup.

Pheu Thai's prime ministerial candidate, Sudarat Keyuraphan, told reporters that although the full results are not in yet, the coalition is likely to secure enough seats for a majority.

"Today, we hold the fact that parties on the side of democracy have received majority support from the people, although figures are not stable yet, he said.

Sudarat added that they are still in talks with other parties.

Who will form a government? The coalition in the lower house will likely not be enough for the opposition to elect the next prime minister and could lead to deadlock. The prime minister is elected by the House of Representatives and the Senate, which is entirely appointed by the ruling junta.

Disputed election: The general election has been dogged by claims of irregularities in ballot counting as well as allegations of vote buying. Criticis have also accused the electoral system, which was revised by the military junta, of favoring pro-military parties. They claim it is rigged to prevent Pheu Thai from returning to power.

Thailand's transgender politician Pauline Ngarmpring: 'I do it for future generations'

Pauline Ngarmpring is the first transgender candidate ever to run for Thailand's parliament. The 52-year-old, a beacon of hope for the LGBT people, tells DW about her entry into politics and what she intends to achieve. (20.03.2019)

After five years of military rule, the people of Thailand have voted in a general election. Prime Minister Prayuth Chan-ocha, the former general who led a coup in 2014, is hoping to extend his rule. (24.03.2019)