After five years of military rule, the people of Thailand have voted in a general election. Prime Minister Prayuth Chan-ocha, the former general who led a coup in 2014, is hoping to extend his rule. 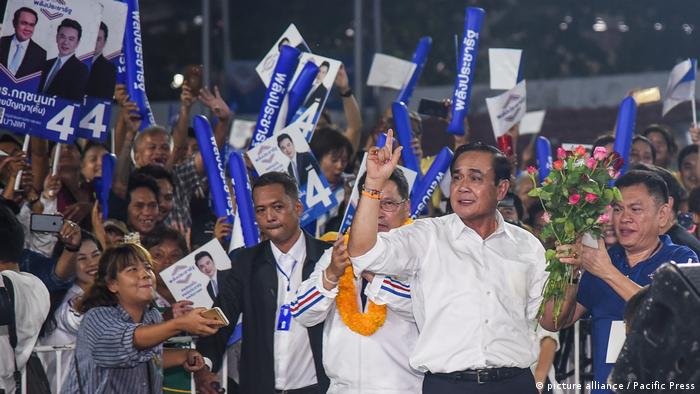 Thailand headed to the polls on Sunday to vote in the first election since the military ousted the elected government of Prime Minister Yingluck Shinawatra in a coup in 2014.

Prime Minister Prayuth Chan-ocha, the army chief who led the coup, is hoping to extend his reign after crafting a new political system that aims to suppress the influence of big political parties not aligned with the military.

About 51.4 million people from Thailand's population of 69 million were able to vote at more than 93,200 polling stations in 77 provinces.

After the elections, a rubber-stamp Senate will choose the prime minister alongside the lower house.

Read more: A moment of shock for Thailand's military

It is the first time in the country's history that parties have had to identify a prime ministerial candidate ahead of an election.

While there is a high chance Prayuth Chan-ocha will be successful, opinion polls show the junta's popularity has suffered over the years due to repeated election delays, the suppression of free speech and corruption allegations. 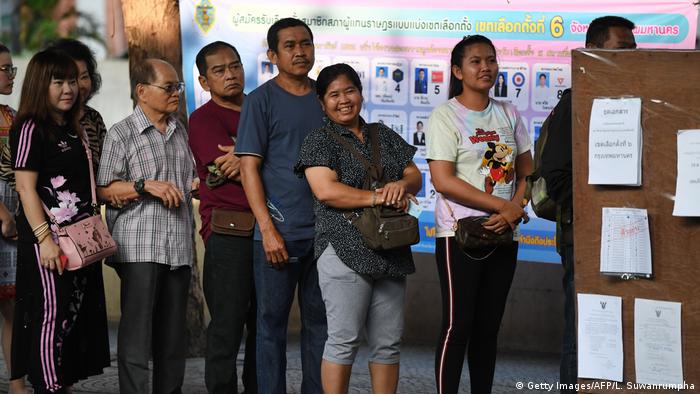 'A military-staged and managed spectacle'

For almost two decades Thailand has been caught between conservative forces including the military and the political machine of Thaksin Shinawatra, a tycoon who transformed traditional Thai politics with a populist political revolution.

Thaksin was ousted in a 2006 military coup and now lives in exile abroad to avoid jail, but parties allied with him have run in every election since 2001.

"This election is a military-staged and managed spectacle in which the odds almost entirely favor the junta," Paul Chambers, a political science professor at Naresuan University in northern Thailand, told German news agency DPA.

Sudarat Keyuraphan, leader of the main pro-Thaksin party, Pheu Thai, said her party would fight to overcome the constitutional barriers Prayuth's regime had set up.

"In 2014, they took power with the barrel of a gun, by a coup," she said. "In 2019, they are trying to take away the people's power again through crooked regulations under the constitution."

Concerns over the economy under Prayuth's rule swing in favor of anti-military parties. "Every time we come back, the economy improves, right?" Sudarat told a crowd of supporters.

But Prayuth's claim in 2014 that he would end political unrest that periodically turned violent and disrupted daily life and the economy has been a selling point for him.

"I will protect this country for our future generations," Prayuth said. "Who will join me?"

There was hope that Prayuth would lose power to Princess Ubolratana Rajakanya, who announced she would be putting in a presidential bid with the Thai Raksa Chart party, which is also considered to be close to Thaksin. But these hopes were dashed when Ubolratana's brother, King Maha Vajiralongkorn, declared her candidacy invalid.

The election commission has said that the first unofficial results will be available three hours after voting ends.

Thailand's transgender politician Pauline Ngarmpring: 'I do it for future generations'

Pauline Ngarmpring is the first transgender candidate ever to run for Thailand's parliament. The 52-year-old, a beacon of hope for the LGBT people, tells DW about her entry into politics and what she intends to achieve. (20.03.2019)

Thailand's king has blocked an attempt by his sister to run for prime minister. Just one day after putting the princess forward as its candidate, the Thai Raksa Chart party says it will comply "with the royal command." (09.02.2019)

Thais wishing to cast early ballots have turned out in droves a week before the country's first election in eight years. The military junta, which took power in 2014, has repeatedly delayed the vote. (17.03.2019)